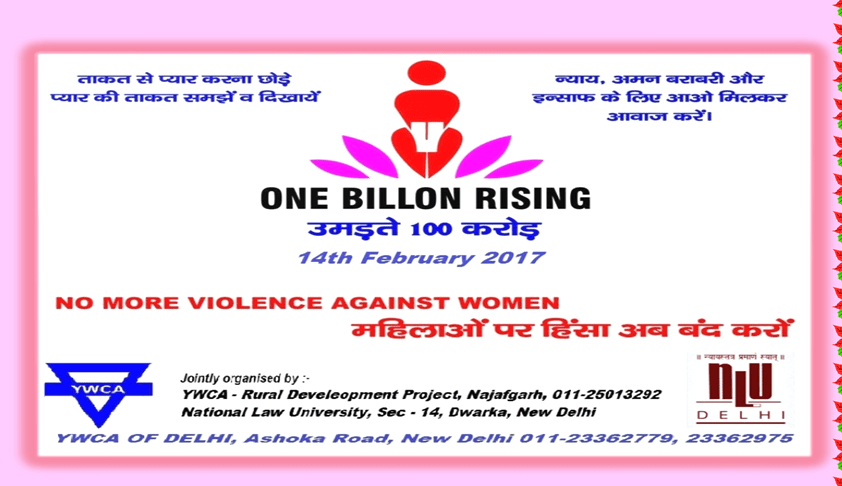 Subscription starts from
₹ 599+GST
(For 6 Months)
View Plans
Premium account gives you:
Subscribe Now
Already a subscriber?
Login
YWCA of Delhi in collaboration with National Law University, Delhi organised One Billion Rising Programme (OBR). One Billion Rising is a Global Campaign to transform patriarchal structures and to end violence against Women and girls. It is the biggest mass action to end violence against women in human history. The program was held in National Law University (outside NLUD Auditorium), Delhi on 14 February 2017 from 10:00 am to 12 noon. Around 150 students and representatives of NGOs participated in the event.

Tracing the campaigns history, the campaign, launched on Valentine’s Day 2012, began as a call to action based on the staggering statistics that 1 in 3 women on the planet will be beaten, or raped during her lifetime. With the world population at 7 billion, this adds up to more than ONE BILLION WOMEN AND GIRLS. On 14 February 2013, people across the world came together to express their outrage, strike, dance, and rise in defiance of the injustices women suffer, demanding an end at last to violence against women. On 14 February 2014, One Billion Rising for Justice focused on the issue of justice for all survivors of gender violence, and highlighted the impunity that lives at the intersection of poverty, racism, war, the plunder of the environment, capitalism, imperialism, and patriarchy. On 14 February 2015, millions of activists in over 200 countries gathered to RISE FOR REVOLUTION, to change the paradigm, demand accountability, justice and systematic change. In 2016, there was a call to focus on marginalised women and to bring national and international focus to their issues; to bring in new artistic energy; to amplify Revolution as a call for system change to end violence against women and girls; to call on people to rise for others, and not just for themselves.

Similar to the previous year’s initiatives, this year also the initiatives are taken to create a new kind of consciousness; one where violence will be resisted until it is unthinkable. The proceedings were started with the welcome address by the convenor Prof. (Dr.) Prasannanshu, Professor, NLUD followed by the performance of OBR song with dance by the vocational students from RDP – YWCA of Delhi depicting the need for the idea of ONE BILLION RISING REVOLUTION: SOLIDARITY AGAINST THE EXPLOITATION OF WOMEN. This was followed by a briefing about OBR given by Ms. Neera Arora, HOD – RDP. The Chief Guest of the event was Prof. (Dr.) Ranbir Singh, Vice Chancellor, NLUD; who talked about the violence being bestowed on women and what could be done to prevent the same. The gathering was addressed by Guests of Honour - Ms. M. Devapriya, President, YWCA of Delhi and Prof. (Dr.) G.S. Bajpai, Registrar, NLUD. A street play (NUKKAD NATAK) titled “Mahilao ka Sangharsh” was performed by vocational students from RDP – YWCA of Delhi depicting the heart drenching sorrows suffered by the women at the hands of the patriarchal society. The proceedings came to an end with the Vote of Thanks given by Ms. Jyotsna Batra, Chairperson, RDP – YWCA of Delhi. The resource persons & organisers include, Prof. (Dr.) Harpreet Kaur, Professor, Prof. (Dr.) Anupama Goel, Professor ,Prof. (Dr.) Anju Tyagi, Professor and Dr. Vinod Kumar, Associate Professor.