One Should Be Proud Of One’s Religion, Ethnicity: CJI Khehar On Independence Day 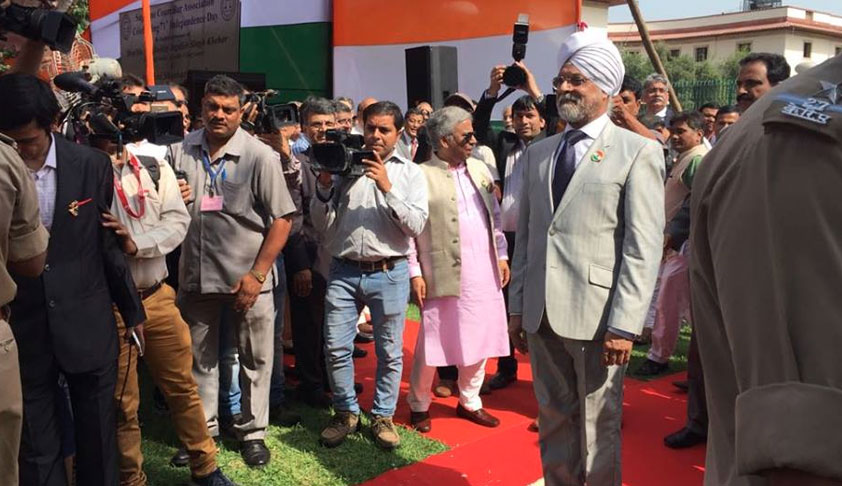 Underlining the secular fabric of the Constitution, Chief Justice of India JS Khehar, on the occasion of the 71st Independence Day, has said: “One should be proud to be an Indian, proud of his own religion and for his own ethnicity.”The CJI was addressing a gathering of Supreme Court judges and lawyers at the Supreme Court lawn on Tuesday. Law Minister Sri Ravi Shankar Prasad was on...

Underlining the secular fabric of the Constitution, Chief Justice of India JS Khehar, on the occasion of the 71st Independence Day, has said: “One should be proud to be an Indian, proud of his own religion and for his own ethnicity.”

The CJI was addressing a gathering of Supreme Court judges and lawyers at the Supreme Court lawn on Tuesday. Law Minister Sri Ravi Shankar Prasad was on the dais.

Recounting his experience when his son had gifted him a T-shirt with a slogan inscribed ‘Proud to be a Sikh by birth and by choice’, Justice Khehar said: “I wondered why I did not wear it before. I was so happy to be in a country which could honour you to be proud of your religion.”

“This country has given place to people from all religions, caste and other walks of life. We have a President who is a Dalit and started his life in a mud house, a Vice-President who was an agriculturalist, a Prime Minister who was a tea vendor, and a Chief Justice who was a Kenyan citizen,” he said.

The revelation about the CJI’s Kenyan origin was news to the gathering.

The CJI later narrated his family background and how he ended up in Kenya. He also reminded the audience about the sacrifices made by innumerable people in the freedom struggle.

Referring to the Law Minister’s speech about unsung heroes of the freedom struggle, he mentioned the names of Abdullha and Sher Ali Afridi, two freedom fighters, who laid down their lives for the nation.

Abdullha had stabbed the then British acting Chief Justice of Kolkata in 1870 and Sher Ali Afridi had stabbed and killed then Governor in Andaman. Afridi’s name is written on the walls of the cellular jail of Andaman. The CJI also made it a point to emphasise the Muslim-Hindu brotherhood by mentioning about the farewell given by Sher Ali Afridi before going to gallows. As a detenuee, Sher Ali made flour cakes for his Muslim inmates and sweets for Hindus, the CJI remembered.

Reminding that the lawyer fraternity had been in forefront during the freedom fight and also in the Constituent Assembly, and thereafter, he said: “As lawyers, we must repay debts to our freedom fighters by being honest to our clients. Let’s earn, while we serve; not just earn.”

The CJI also promised making the digital version of Supreme Court Reports free of cost to all lawyers in a week.

He also cleared rumours about the appearance of his son’s name in the Punjab government advocates’ panel, which happened without even his or his son’s knowledge.

He said his son never applied nor took any brief from the Government of Punjab and his son had told him that it could be some person with a name ‘Khehar’.

Union Law Minister Ravi Shankar Prasad, who was the guest of honour, expressed his happiness for having Justice Khehar as the CJI and his manner of resolving issues with dignity. He said the highest number of judges were appointed to high courts and Supreme Court during his tenure.

Ravi Shankar Prasad, who is also the Information and Communication Minister, said digital profiling is basically digital inclusion and explained the steps taken to digitalise judicial records and judgments.

He said India is a secular country and would remain secular, and emphasised the importance to respect all paths of faith.

For greater transparency in judges’ selection, the minister suggested that the judiciary should adopt a stricter selection process for appointments in subordinate judiciary. He sought permission of the CJI to mention about the pending suo motu PIL initiated by the Supreme Court for the appointment of members to subordinate judiciary and congratulated the Supreme Court for taking suo motu notice of the issue and also appealed opposing high courts to support the PIL in judges’ selection methods.

Attorney General for India senior advocate K K Venugopal, true to his stature, made a speech and said the occasion should be used to introspect. In his first speech after taking over as the government’s top law officer, he focused on the eradication of poverty in the country. Poverty is the greatest challenge, he said and cautioned that Independence is not just for the better placed, but also for those who are deprived of their fundamental rights. Not to be in poverty should be a fundamental right, he said.

He said unless corruption is stopped, it would be difficult to eradicate poverty. Venugopal emphasised that the three organs - Legislature, Executive and Judiciary - have worked together and must work together for the independence of deprived people. The lawyers have a greater role to raise the issue by filing petitions in the court.

“We find that a vast percentage of the population of this country is living in utter-penury and this goes into millions,” he said. The State has been unable to provide for universal education in 70 years. The health services of the poor appear to be in shambles. Without naming the Gorakhpur child deaths, he mentioned that recent deaths show that we need better healthcare.

“In 1950, we were given a powerful tool and the thread of equality runs through it, but how far,” the AG asked. “The Parliament is making laws after laws against deprivation and we have progressed, but still there is vast difference,” the AG said, calling for working towards inequality. KK Venugopal reminded that “we still see tragic cases where people dig to eat roots to fill their stomach”. “By the next Independence Day, we need to progress more,” he said.

SCBA president RS Suri also spoke against criminalisation of politics and wastage of parliamentary time. He sought appointment of judges from the Supreme Court bar to high courts, and also criticised the trend of judges’ sons being appointed as judges.