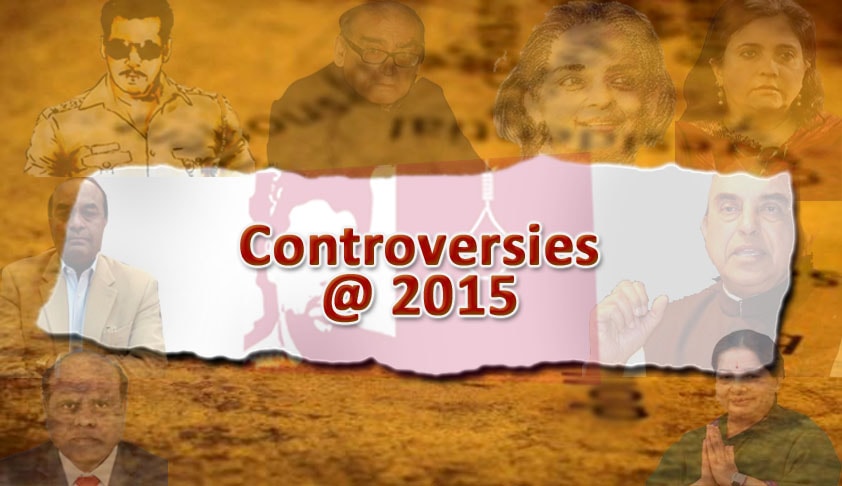 Whittier wrote –“For all sad words of tongue or pen,The saddest are these : It might have been.”Shedding the controversies of the winter past, 2015 wrote its own bundle of issues. Apart from the political establishments which have mastered the art of controversies and which probably run their business on controversies, the judiciary too this year proved correct Whittier’s notion of...

“For all sad words of tongue or pen,

Shedding the controversies of the winter past, 2015 wrote its own bundle of issues. Apart from the political establishments which have mastered the art of controversies and which probably run their business on controversies, the judiciary too this year proved correct Whittier’s notion of ‘It might have been’. Repeating a few and evolving fresh ones, controversies marked their presence on a national pedestal which tainted the image of judiciary.

The most debated controversy of 2015 perhaps was the letter from Justice Kurian Joseph to the then CJI Dattu reasoning non attendance to the Joint Conference of Judges and Chief Ministers on Good Friday. Justice Kurian also wrote to the Prime Minister suggesting that important conferences should not be held on days of religious observance. Justice Dattu, in his reply stated that individual interests should not over shadow institutional interests and went on with the Conference. It created a lot of stir as communications between two constitutional authorities were put in public parlance and discussed by media. No less was the recusal issue raised by Fali Nariman in a unique way of bench hunting by opposing Justice Dave’s presence on the NJAC bench. Justice Dave recused but when the same objection was put to Justice Khehar, he refused to recuse and passed a reasoned order for presiding over the bench. Forum shopping by alleging apprehension of biasness against judges, though, is not new but when it came from a distinguished jurist like Fali Nariman, controversy was inevitable.

Death penalty as a mode of punishment caused more stir this year especially when the Supreme Court opened its gates for a mid night hearing hours before execution of Yakub Memon as a vital and delicate issue of taking away human life by the state was involved. The 262nd Law Commission Report days after the execution recommended abolition of capital punishment except for terror related cases. Nevertheless, the discretion of opening courtroom at midnight was reused in a petition against the Juvenile release in Nirbhaya rape case. It created a lot of stir at year end again but Supreme Court refused to contain the juvenile beyond his term. Immediately afterwards, Rajya Sabha approved the amendment bill which bracketted juveniles between 16-18 years of age who commit henious offences separate from normal juveniles in conflict with law.

Francis Bacon in his classic essay ‘Of Judicature’ warned judges to not get influenced by the status of the accused. 2015 witnessed a series of influential cases being heard and disposed off & created a lot of controversy. Tamil Nadu’s Chief Minister Jayalalitha’s acquittal in disproportionate assets case crafted a new joke in the lawyer’s corridors – “What is the basic criterion of becoming a judge? – You should not know maths. ” After a strongly worded conviction by the trial court and a lot of drama over jurisdiction of High Court and Public Prosecutor, the Karnataka High Court acquitted her and allies of all charges. The matter is now sub judice in the Supreme Court and notices have been issued while posting the matter in January 2016. Another celebrity, Bollywood’s Bhai – Salman Khan’s hit and run case – Jail, Bail & Acquittal created a lot of stir. The trial court found him guilty and awarded jail. The very same day, Bombay High Court granted him bail and within 8 months he stands acquitted of all charges. Sadly, after 13 years of the unfortunate incident, investigation was found to be flawed and the chances of convicting the real culprit now are minimal. The acquittal order for ansals in Uphaar cinema verdict also created quite a stir as even after arriving at culpability, the court deemed it fit not to imprison them but allow only fine to the tune of Rs 60 Crores. However, the most controversial celebrity legal event in 2015 was the state sponsored lobbying against Teesta Setalvad & the Supreme Court had to step in. In a one of its kind matter, a battery of senior lawyers stood for Teesta against the army of govt. law officers and successfully defended her fundamental rights. The matter took political twists and turns and as of date, Teesta & her husband are at large.

Shakespeare wrote in Richard II, Act I, Sc. I –

Is spotless reputation; that away,

Men are but gilded loam or painted clay”

The image of higher judiciary was questioned in the M.P Sexual harassment case. A district judge sought action against a sitting High Court judge in Madhya Pradesh alleging sexual harassment. Indira Jaising appeared for the petitioner and claimed that due procedure should be followed. The Supreme Court through Justice Khehar appointed a fresh 3 member committee of Justices G.Rohini, Ajay Rastogi & Chandrachud which opined that there was no case against the High Court Judge. The findings of the panel have been challenged by the petitioner in the Supreme Court now. Similarly, allegations put by Prashant Bhushan & Dushyant Dave against Justice C.K.Prasad were not found correct by the Supreme Court and a PIL to remove him from the post of Chairperson Press Council of India was dismissed.

While all this was happening, Justice C.S.Karnan of the Madras High Court marked his presence on the national pedestal by making controversial remarks. Justice Karnan passed an order questioning a brother judge’s inclusion in the committee to interview candidates for selection as civil judges and stayed the recruitment process. He also threatened to file contempt of court proceedings against High Court Chief Justice Sanjay K Kaul over appointment of judges. Further, he directed CBI to conduct an enquiry on educational qualification of the judge. After Supreme Court restrained him from interfering with the judges’ selection process, Justice Karnan asked the Registrar General to sanction Rs 5 lakh to defend himself before the apex court. Justice Karnan also alleged a brother judge of sexually assaulting an intern in the High Court premises. In a series of judgments, other judges also went on to make personal comments while hearing cases. Justice P.Devadass directed a rape survivor to go in mediation for raping her. The Supreme Court had to step in and hold that no mediation is possible in sexual offences. Justice N.Kirubakaran had in 2014 suggested that pre-marital potency tests be made mandatory. This year he directed the Central Government to examine castrating child sexual abusers, especially child rapists. Justice J B Pardiwala’s comment on reservation and corruption in Hardik Patel’s case was taken seriously by the Rajya Sabha and the judge had to remove the remark from Para 62 of his judgment. Interestingly, Justice Katju continued his spree of making news and put scathing allegations of corruption against the then CJI Dattu. For the first time, 2015 made us witness allegations of such nature by a retired judge against a sitting Chief Justice (then). Justice Katju also filed a PIL against motion in Rajya Sabha over his remarks which the Court was reluctant to issue notices to. Notably, politician M.V.Jayarajan was found guilty of contempt of insulting judiciary but when a retired member of the bench itself questioned sanctity of judges, it was let go. The subordinate judiciary also could not remain untouched with controversies and entrance exam for Delhi Judicial Services (DJS) was questioned by Prashant Bhushan by a PIL in the Supreme Court. The Court then ordered revaluation of answer sheets of candidates who wrote ‘mains’ by a retired judge of the Court Justice Reddy.

Following footsteps of the robed bretheren in Rajasthan (68 day long strike in 2014) lawyers in Pune, Delhi, Bihar and Tamil Nadu went on strikes demanding separate bench, pecuniary jurisdiction, corruption and Tamil as the court language along with other issues respectively. The Delhi High Court however went ahead with the amendment and Madras High Court did not succumb to the pressure from bar. Actions were taken by the Court by initiating contempt proceedings and the Bar Council of India suspended few unruly advocates displaying a crystal clear sense of wisdom. However, the most significant controversy was in the Supreme Court where the bar association (SCBA) under Dushyant Dave regime decided to boycott all official events of Judges including references, law day and farewell functions. CJI Dattu initially showed reluctance but later on had to agree to give fair and rational hearing to the demands by the bar. Senior Advocate Vikas Singh added to his share of controversies when a direct conflict was reported by the opponents in the Medical Entrance examination case as he had previously appeared for them. Justice T.S.Thakur took serious objections to this and Vikas Singh had to apologise in writing on record. In another significant issue, in Kerala Bar case, Attorney General Mukul Rohatgi appeared for private parties which was hotly debated across. Being in capacity of a constitutional post though morally he should have refused to appear, yet after his submission that he had taken NOC from the government he was allowed to argue the matter.

While Beef ban, NJAC, National Herald etc cases made national and international news, defamation cases between political rivals and the ‘regular’ stay by the Supreme Court in criminal defamation cases (as the validity of Sec 499, 500 IPC is sub judice) also created lot of controversies. In an unprecedented move, a lawyer Seema Sapra was fined Rs 2,000 and barred from practising law for two years by a Delhi high court bench of justices Valmiki J Mehta and P S Teji, after she had called Delhi high court Justice Vibhu Bakhru corrupt by alleging that he sat on a bench out of turn.

Justice Krishna Iyer once said “What can the nation or the bar do if the apex court has the fancy to sip every flower and change every hair?”. Going ahead with the judicial activism, which also ironically Krishna Iyer supported, the Supreme Court went ahead and made a unique appointment of LokAyukta for State of Uttar Pradesh of Justice (Retd) Virendra Singh of Allahabad High Court. It was although deferred later on an application by a journalist, yet the unprecedented move created lot of controversy on self assumption of wide powers of appointments by the Supreme Court.

However, the most controversial event in 2015 was ‘judgment by intern’ in Delhi High Court. A division bench of Delhi high court consisting of Justices Pradeep Nandrajog and Mukta Gupta delivered a judgment in an appeal in a giant patent dispute where F.Hoffmann-La Roche claimed that Cipla’s cancer drug ‘Erlocip’ infringed Roche’s patent IN ‘774. The authors through a facebook post objected that 34 paragraphs have been taken straight from their article in Queen Mary Journal of Intellectual Property, Vol. 3 No. 2, pp. 167–175. The same division bench of the court in a “corrective action” expunged the paragraphs from the judgments which were alleged to have been plagiarised. It was later unofficially circulated that the paras were added by an intern and the judges could not check because of length of the 275 para judgment.

“I know not whether Laws be right,
Or whether Laws be wrong;
All that we know who lie in gaol
Is that the wall is strong;
And that each day is like a year,
A year whose days are long.”

On a positive note, we welcome 2016 hoping that our proud judiciary will not repeat mistakes & controversies. The first step in that direction, perhaps, will be that judiciary must understand that if the judges want to join in, our polity is already diseased. Fingers crossed!