Over 80 DSNLU Students Continue Protests After Being Ousted From Hostel 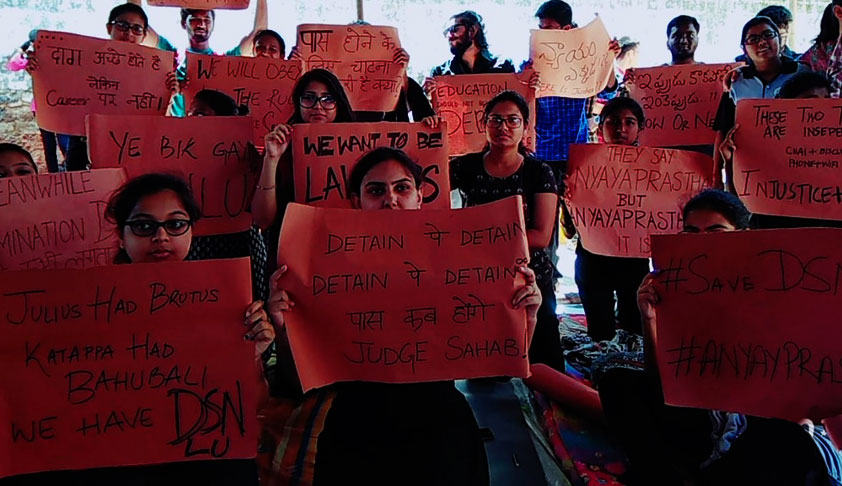 After being expelled from the campus for failing to clear examination backlog, over 80 students of the Damodaram Sanjivayya National Law University (DSNLU), Visakhapatnam continued their protest against “arbitrary examination rules and their faulty implementation” on Monday.

According to reports, the students have to pass two categories of exams—even semester (May to July) and the odd semester (November/ December). Up until February, every student was allowed four attempts to clear backlogs of each semester. However, after the even semester backlog exam on July  20, 2018, the university authorities forcibly vacated the students who wanted to stay at the university hostels till odd semester backlog examinations in November /December.

Students now allege that they were informed about the change two days before the action was taken by the authorities. A student was quoted as saying, “The university authorities told us just two days earlier about the new system that for the odd semester backlog examinations, we have only three attempts instead of four. Though we requested the university, they mercilessly sent us out of the campus on Friday evening. Now we are demanding justice.”

Another student told LiveLaw through an email that the students are now demanding several assurances in the implementation as well as amendment of examination rules. They wrote, “Unfair and surprising changes in the rule book with no prior notification cause chaos amongst students and disrupt the education environment that has to be maintained by such a prestigious institution.

We want things to change so that no other student has to face the wrath of the administration ever again. We want a permanent solution to these problems. This hour calls for transparency. All we ask for is a fair chance with the assurance that we will get what we deserve , nothing more and definitely nothing less.”

Vice Chancellor, Professor V. Kesava Rao, however, defended the move, asserting that the same is in compliance with the University rules and regulations. He was quoted as saying, “We have informed the students about the new system which is totally based on the rules and regulations of the university and the directives of the High Court Chief Justice who is the Chancellor of the university. These students, who are now staging a dharna, have many backlogs... That is the main problem. As far as the university is concerned, we have provided gave shelter for more than a week  on humanitarian grounds, they all have to go out of the campus by July 15.”