P.P.Rao and Jethmaalani opposes SCBA resolution for boycotting functions with Judges; Dave says 'advise the Judiciary not us' [Updated] 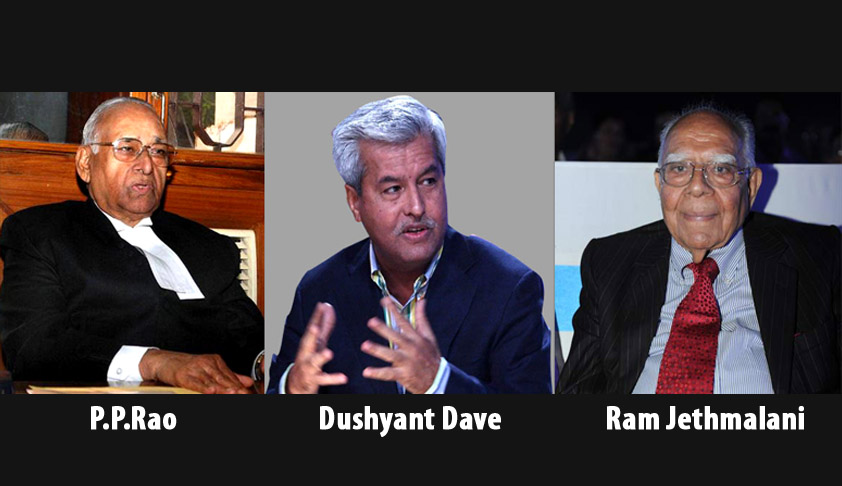 Senior Advocate P P Rao has taken strong exception to the proposed resolution (Resolution No.1) of the Supreme Court Bar Association sought to be moved in its General Body Meeting on 8th of July, 2015 whereby the members seek to resolve not to participate in any Official Functions with Hon’ble Judges of the Supreme Court, including References, Independence Day and Law Day functions and not...

Senior Advocate P P Rao has taken strong exception to the proposed resolution (Resolution No.1) of the Supreme Court Bar Association sought to be moved in its General Body Meeting on 8th of July, 2015 whereby the members seek to resolve not to participate in any Official Functions with Hon’ble Judges of the Supreme Court, including References, Independence Day and Law Day functions and not to give farewell  functions to retiring judges of Supreme Court.

In a strongly worded e-mail addressed to Ms. Aishwarya Bhati, Secretary of the Supreme Court Bar Association [which has been accessed by “Live Law”], Mr. P P Rao has demanded that the SCBA reconsider the proposed resolution.

Mr. Rao has however supported the second resolution to file a Writ Petition in the Hon’ble Supreme Court to ensure that the Members of SCBA get all the facilities as are needed to enable them to perform their duties towards their clients, to ensure proper justice to them and to enforce their Fundamental Rights etc.

Mr. Rao states in his e-mail that grievances against individual Judges, if any, should not be projected as grievance against the Court in which the lawyers practise. “ Individual Judges and lawyers come and go, but the Bench and the Bar will go on forever,” added Mr. Rao.

Taking exception to the move to boycott Full Court references to departed Judges, Mr. Rao has said that boycotting references would amount to insulting the memory of departed Judges, for no fault of theirs apart from affecting the prestige, dignity and credibility of the Bench and the Bar. He also adds that it would be improper to boycott Independence Day Celebrations since is a Fundamental Duty of every citizen to abide by the Constitution and respect its ideals and institutions, the National Flag and the National Anthem and also since it “is the day of national rejoicing at which the National Flag is hoisted.”

With regard to the move to boycott Law Day function, Mr. Rao has said that Law Day was institutionalized on the initiative of late Dr. L.M. Singhvi when he was the President of the SCBA, and boycotting it would amount to “boycotting our own function.”

Mr. Rao has further stated in his mail to Ms. Bhati that “Farewell to a Judge by the Bar is a long standing convention which demonstrates institutional courtesy of the Bar towards the Bench. I always try to attend every farewell function of a Judge without exception, even if I felt that a particular Judge did not deserve the honour. So long as the person holds the judicial office, the chair deserves respect which extends incidentally to the incumbent.”

Concluding his mail, Mr. P.P. Rao has appealed to all the Members of the Supreme Court Bar Association to reconsider the proposed Resolution No. 1 and not to pass the same, and “maintain the traditions of the Bar and dignity of SCBA.”

Responding to Mr. P.P. Rao’s “earnest appeal” to members of the SCBA to reconsider resolution no.1, the President of the Supreme Court Bar Association, Mr. Dushyant Dave has sent a reply mail expressing his disappointment at Mr. P P Rao’s stand. Mr. Dave has expressed his surprise at the fact that Mr. P P Rao chose to advise the Bar instead of using his good office and standing to talk to the Chief Justice of India to sort out the issues. He has termed Mr Rao’s counsel to the Bar as to its duties and obligations as totally irrelevant.

Mr. Dave writes “I truly wish that instead of reminding us of our duties and obligations, which I humbly submit are totally irrelevant, you Sir, had reminded the Hon'ble Chief Justice and the Court officials of their duties and obligations towards the Bar and it's Members. Your stature is such that you could have easily prevailed upon them to see the harsh reality in absence of decent facilities. You have and can meet the Hon'ble Chief Justice to bring about Just solution to this vexed problem.

You have been kept informed of each of these burning issues, including Designation of Seniors by the Court. I too have discussed them with you and you have always kindly offered me your ear and advise. So what prevented you Sir to do it this time for the Bar? Instead of this wise counsel to us, you could have picked up the phone and talked to the Hon'ble Chief Justice to sort out the issues. So why did you not, is very perplexing.”

Mr. Dave has revealed with “regret” in his e-mail to Mr. P P Rao that though many Senior Advocates met him in last two days and advised him to avoid confrontation with Judiciary, “not one of them offered to use his or her good offices to resolve the impasse by offering to tell the Hon'ble Chief Justice to be kind to the Bar and offer the facilities.” Concluding his passionately and eloquently written e-mail, Mr. Dave has appealed to Mr. P.P. Rao to “see the matter from the perspectives of this vast multitude of the Bar and not from the prism of a Senior alone” and requested him to “lend me and my Executive Committee your strength and stature in this avoidable, but forced upon Struggle of the Bar.”

Meanwhile Senior Advocate Ram Jethmalani also wrote a letter to Dave saying that “Prima facie the circular seems to be somewhat ill-advised and almost a contemptuous confrontation with the Judiciary. This is the time when our judiciary needs to be strengthened by full cooperation of the bar and I regret that at least I cannot be party to it”. [See the letter attached]

“Far from the strengthening the Bar, over the years the bar has become weaker and weaker largely due to the failure of the Leadership of the Bar. The leading Lights of the Bar have done precious little to help the Bar benefit in terms of its status and facility. I really wish that if you indeed had the interests of the Bar in your heart, you would have perhaps advised the Judiciary to redress the issues confronting the Bar rather than say what you have said”. [See the letter attached]

The SCBA has decided to move the resolution to boycott all official functions with SC judges aggrieved by the fact that its repeated requests to the Supreme Court and the Chief Justice of India for basic and minimum facilities for the Bar had falls on deaf ears and elicited no response.  [read the full story here]