Panel Discussion On ‘Baptism By Fire: Trial Of Speech, Democracy And Media In India’ Successfully Held At Nirma University 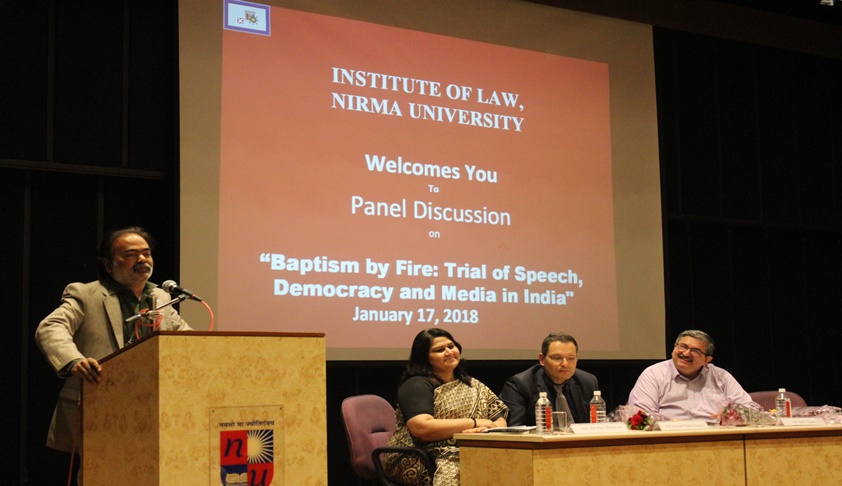 Director of Institute of Law Prof Purvi Pokhariyal gave the inaugural address where she emphasized on the significance of social engineering and how law students can act as a catapult for the change in society.

Prof Rafael spoke about the free speech being an intrinsic principle of democracy and shared some examples of how autonomy of press helps in promoting tolerance, protecting human rights and give the marginalized an opportunity of being heard. According to him, the litmus test of any democratic nation is the state of its minorities. He emphasized on the evolution of press in the United Kingdom and how media mogul Rupert Murdoch played an important role in it. He ended with an observation about media, which was “when you control the media, you can control the masses”.

Salil Tripathi presented his views on hate speech and freedom of expression in Indian politics and how it affects the democratic ethos of the country. He spoke about the mob censorship and various legal provisions which provide a threat to freedom of speech and expression like sedition, blasphemy etc. He said there is a need to draw a line between hate speech and dangerous speech which is far more detrimental to democracy. Dangerous speech, according to him, is which incites violence, has an influential speaker and has audience, asserts or attacks vulnerable groups and is preceded by a historical context.

Ajay Umat largely focused on media spinning, where news is insisted according to the whims and fancies of crony-capitalists. He reiterated that media in India can easily be influenced by the powerful and the rich, which is dangerous for the democracy, where freedom of speech and expression are regarded as fundamental rights.