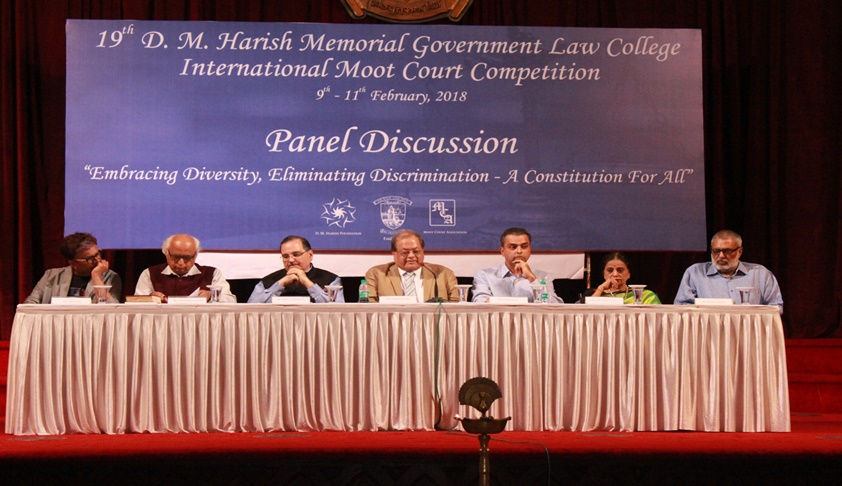 The DM Harish Foundation, in association with the Moot Court Association of Government Law College, Mumbai, has organised a panel discussion as a part of the DM Harish Memorial Government Law College International Moot Court Competition every year.The topic for the panel discussion this year was ‘Embacing Diversity, Eliminating Discrimination – A Constitution for All’. The discussion...

The topic for the panel discussion this year was ‘Embacing Diversity, Eliminating Discrimination – A Constitution for All’. The discussion aimed at tackling issues faced by various stigmatised communities.

The panel was moderated by Mr. Haresh Jagtiani, Senior Advocate, Bombay High Court, and it comprised of individuals from different fields:

The panel discussion was held on 9th February, at Convocation Hall, Mumbai University, Churchgate, at 5:30 PM.

The panel discussion is a precursor to the 19th DM Harish Government Law College International Moot Court Competition, 2018 instituted in memory of the late Mr. DM Harish, a distinguished advocate and a renowned authority on income-tax law in India.

Mr. Sidharth Bhatia spoke about the importance of press, the “voice of the voiceless”. With the press prostrating to the government, we are only being held together by the fundamental decencies of the people.

Padma Shri Bhawana Somaaya spoke up regarding the rights of women, stating that a life of privilege often shelters one from discrimination. With respect to discrimination towards women, the solution lies in looking into your conscience and getting sensitized.

Mr. Harish Iyer strongly believes that homosexuality is not inherently illegal and everyone is entitled to privacy and autonomy over their body.

Mr. Darius Khambata, agreeing with Mr. Iyer, questioned the subjective definition of ‘order of nature’. Although the LGBT community is a miniscule section, it deserves to be recognized. He drew a connection between progress and protection of minorities, stating that an inclusive society is essential for harmony and productivity.

Mr. Sudheendra Kulkarni stated that socialism is an important part of our Constitution, integral for economic justice, and Mr. Khambata added that the country needs frequent disciplined dialogue for guarding civil liberties, and that it is not about government alertness but alertness from people to not discriminate that is essential.

Moderator Mr. Haresh Jagtiani posed several intriguing questions that delved deeper into the issues faced by the minorities in this country. On being asked about the prejudices encountered, Mr. Iyer candidly spoke about forced marriages, extortions, suicides and other atrocities imposed on them by societal standards. The onus of inclusion, he stated, is not on those excluded but on the ones who are included, and we speak from a point of privilege.