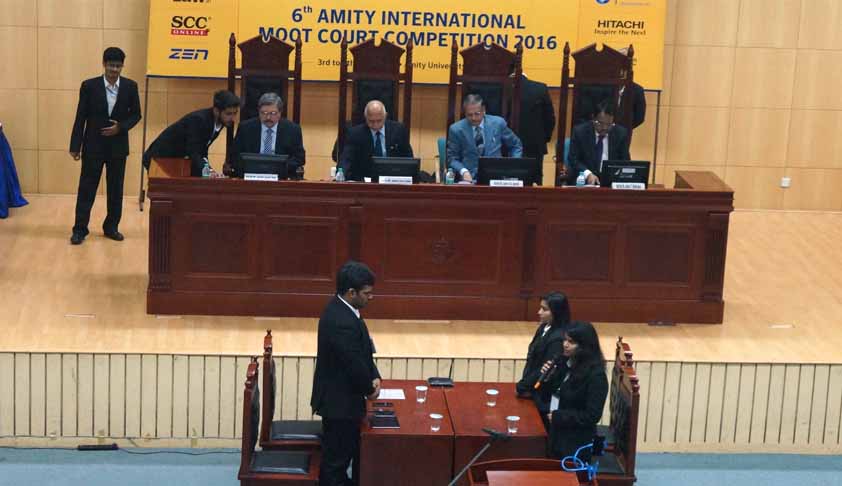 Retired Allahabad High Court Judge, Justice Rajesh Tandon and Director of Eastern Book Company and SCC Online, Sumeet Malik inaugurated the event. A total of 37 teams had participated in the event, with one team from Nepal.

The teams in the 2nd paperless moot argued in the pre-trial setup of the International Court of Justice and fought it out through the preliminary round, quarters, semis and the best two teams battled in the finals.

Based on International Humanitarian Law, the finals of the moot was judged by an esteemed bench of judges that included – Justice RK Agarwal of Supreme Court of India, Justice T Mathivanan of Madras High Court, Justice Jayant Nath of Delhi High Court and Justice Arun Tandon of the Allahabad High Court. The teams that went to the finals were Chanakya National University, Patna and National Law Institute University, Bhopal.

The Chief Guest of the event Justice RK Agarwal expressed his privilege to be a part of such an esteemed panel and participating in nurturing of the future lawyers of the nation. He explained that moot enables students to think critically, speak confidently and gain practical knowledge. He said, "A lawyer is lawyer, elevated or not, I am still a learner and I learnt a lot today while judging the moot."

While Justice T Mathivanan stressed that law students need to keep them updated as the law is constantly changing, Justice Vibhu Bakhru congratulated the organisers for carrying forward their endeavor to keep the moot paperless. He also shared that the Delhi High Court is also making efforts to minimize the use of paper in courts as much as possible.

The winners of the competition in different categories were: