Peregrinator Of A Road Less Travelled By 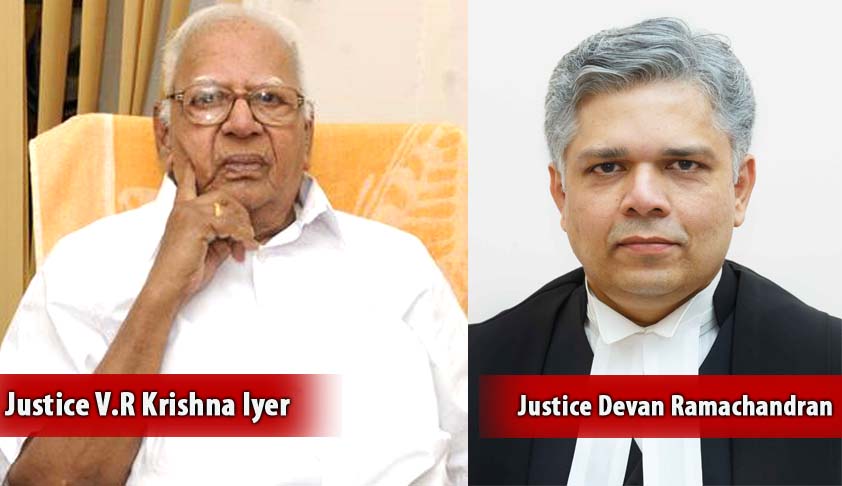 I have chosen the title of this tribute after long thought and am convinced that no other can describe the life of Justice Krishna Iyer any better.

The life and times of Justice Krishna Iyer is in itself a festival that coronates the most fitting commemoration.

That he is the tallest jurist who walked this part of the world would, when made with reference to the redoubtable Justice Krishna Iyer, be cast as no more than a litotes and no amount of hyperbole would justify his extra ordinary and prodigious contributions to every facet of the human life and endeavor. One can think of no other than the lines of William Shakespeare from King John titled “To gild Refined Gold” when a panegyric is attempted for Justice Iyer:

To gild refined gold, to paint the lily,

To throw perfume on the violet

To smooth the ice, or add another hue

Unto the rainbow, or with taper-light

To seek the beauteous eye of heaven to garnish

Is wasteful and ridiculous excess.

So much has already been written about Justice Iyer and one would be pushed to think that nothing about him is left unsaid. But presto, reams of new pages appear as articles, columns, books and reflections from several standpoint on and about him impelling one to greater insight of a truly remarkable, exceptional and illustrious man who did us all proud by his life work . “He is not one man but a possession of men” as Norman cousins said of an equally impressive man, Pandit Nehru. Nothing would describe Justice Krishna Iyer also better.

Dr.Samuel Johnson, the lexicographer par excellence, wrote as an epithet of Oliver Goldsmith that “he left scarcely any style of writing untouched and touched nothing that he did not adorn”. Had Dr Johnson lived these days, he would have surely said of Justice Iyer that he left scarcely any subject of law and human affairs untouched and that he has touched nothing that he did not adorn. Justice Iyer’s judgments have stood the test of time and have transcended from being his opinions to being what is taught in our Law Schools and Universities as paramount and sublime lessons in forensic evaluation, social engineering and matters of life and human endeavor. It was Marx who said “I am human: I count nothing pertaining to humans, alien to me ”. Justice Iyer adopted this thought as his life’s motto in pursuit of the eternal truth and sublimated analysis of the cosmic law in application to human affairs.

If one were to look for the wealth of Indian thought, patriotism and national ethos, it would require no more than to embrace the literary and spoken words of Swami Vivekananda and Rabindranath Tagore. Justice Krishna Iyer’s various judgments would indubitably establish that he had recognized and had been intensely imbued by this vast repositorium of intellectual wealth preserved in the writings and works of the Swami and Tagore and most of his judgments have liberally been embellished by the quoted words of these two greatest sons of India. The exortation of Swami Vivekananda to “Feel, my children, feel for the poor, the ignorant, the downtrodden; feel till the heart stop and the brain reels and you think you will go mad” has immaculately found reflection in each of Justice Iyer’s judgments and opinions. He has quoted Tagore and the Swami like no judge before or after him -diectic of Justice Iyer’s profound and indomitable pledge to Universal humanity.

His steadfast fast purpose and purity of character distilled in the words of Tagore from Gitanjali:-

Life of my life, I shall ever try to keeping body pure,

knowing that they living touch is upon all my limbs.

I shall ever try to keep all untruths out from my thoughts.

Knowing that thou art that truth that kindled the light of reason in my mind.

I shall ever drive all evils away from my heart and

keep my love in flower, knowing that thou hast

thy seat in the inner most shrine of my heart.

And it shall be my endeavor to reveal thee in my actions,

knowing it is they power gives me strength to act.”

Robert Frost poignantly sang in his poem “The Road Not Taken”:-

“I shall be telling this with a sigh

Two roads diverged in a wood, and I-

I took the one less travelled by,

And that has made all the difference”

One could never imagine a better ode to describe the life and works of Justice Krishna Iyer. He did not walk the beaten path, he ineluctably took the road less travelled with his arms on the shoulders of the poor, downtrodden, suppressed and repressed sections – man, woman or child, sensitizing and humanizing the legal and curial response to cries of help from the ‘daridranarayanas’ and the weakest segments of ‘We, the people of India’. As Fali S.Nariman said of him “He carved out a special entrance for the destitute in the somewhat formidable portals of the Supreme Court”. He exemplified progressive judicial activism as against regressive judicial passivism as the sentinel on qui vive moulding remedies so as to empower the alienated, disabled, indigent and chastised among the citizens to move and seek from the hallowed courts what is their rightful due .

He really did take the least travelled road abjuring the Primrose Path of merely adjudicating the lis before him but rising to be a social engineer and peoples’ sentinel as their conscientious and committed pro tempore against evil wherever found. Posterity may judge Justice Iyer to be right or wrong, but his jural confidence was not because he thought he was always right, but because he was never afraid to be wrong. His judgments reflect the most essential evaluation of justice - that it consists of not being neutral between right and wrong, but in finding out right and upholding it, where ever found, against the wrong. His zeal and devotion to human rights, his rectitude and uprightness in issues relating to the most marginalized, his devotion and devoutness to the constitutional imperatives and values which he described variously as immutable, sacrosanct and sublime have made Justice Krishna Iyer an empyrean phenomemen in the legal and societal firmament never seen earlier and may never be after him.

The verse of Dr.Annie Besant, which has inspired Justice Iyer forever and more would be the most fitting epilogue:

May each, who feels himself as one with thee,

Know he is also one with every other

Justice Devan Ramachandran is a Judge, High Court of Kerala.

P.S:- This is an adaptation of an article written two years ago in a Festscrift honoring Justice VRK