Perhaps, the bull is not holy enough! 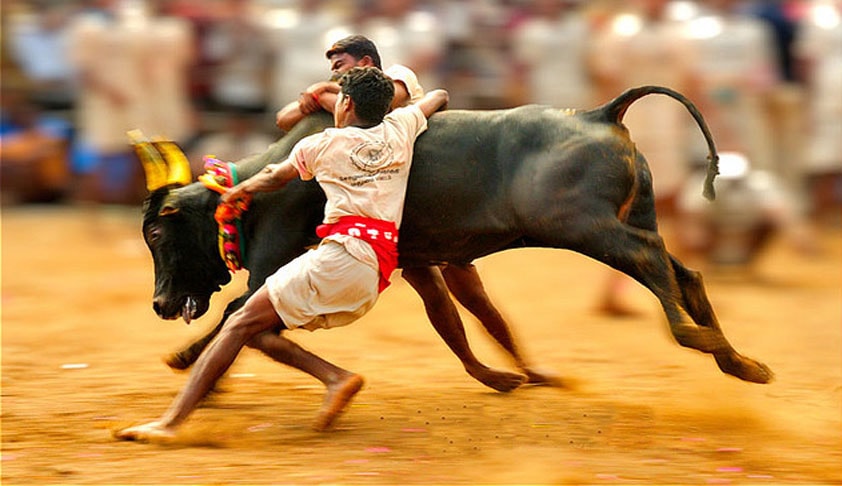 Recently Union Ministry of Environment & Forests (MoEF) issued a notification to permit ‘Jalikattu’ (a bull taming sport of Tamil Nadu) which was banned by the Supreme Court in Animal Welfare Board v A. Naragaja [2014]. This pernicious notification, which also permits bullock cart racing in Maharashtra, raises important legal questions.Firstly, whether the ruling establishment can...

Recently Union Ministry of Environment & Forests (MoEF) issued a notification to permit ‘Jalikattu’ (a bull taming sport of Tamil Nadu) which was banned by the Supreme Court in Animal Welfare Board v A. Naragaja [2014]. This pernicious notification, which also permits bullock cart racing in Maharashtra, raises important legal questions.Firstly, whether the ruling establishment can step over a writ issued by the highest court of the land through a notification? And secondly, whether the notification violates any statutory or constitutional provision?The legislative enactments which surround the whole issue are the Prevention of Cruelty to Animals Act, 1960 (PCA), the Tamil Nadu Regulation of Jallikattu Act, 2009 (“TNRJ Act”) and Articles 21, 48, 48A & 51A(g) of the Constitution.

In 1991, MoEF issued a notification banning training and exhibition of bears, monkeys, tigers, panthers and dogs, which was unsuccessfully challenged in N. R. Nair(2001). Later it issued a fresh notification dated 11.7.2011 specifically including “Bulls” so as to ban their exhibition or training as ‘performing animals’. This notification was approved by the Supreme Court in Animal Welfare Board and the TNRJ Act was held unconstitutional.

In its signature move, our legislature has many a times overturned decisions of the Supreme Court by legislating via amendments or fresh enactments. This method of turning judicial dictums upside down has been permitted as the state needs to enact laws to uphold rule of law. However, this freedom to legislate is not untrammeled&has been restricted to be used for particular instances. In State of Tamil Nadu v State of Kerala [2014], a Constitution Bench of the Supreme Court held that this principle has no application where a judicial decision has been rendered by recording a finding of fact. (Para 143) It was also held that the question whether or not the legislature has usurped the judicial power would depend on facts of each case and one of the tests for such determination is to see whether the law and the judgment are inconsistent and irreconcilable so that both cannot stand together. (Para 151) The issue at hand clearly shows that the judgment & the notification are directly in conflict. Instead of respecting the verdict of the Court, the centre has shrugged off the issue by a 2 page notification. It also is trite administrative law that delegated legislation like a notification cannot be used to subvert the parent legislation, which in this case is Section 22 of PCA.

Love to other species has been the culture of the land & in particular Ishavasya Upanishad professes that no creature is superior to any other; He who sees everywhere the self in all existences and all existences in the self, shrinks not thereafter from aught. (Verse 6)The post-independence India gave itself the PCA to extend welfare to animals. It has been judicially settled that PCA is a welfare legislation & has been drafted to check exploitation of animals by humans. Globally speaking, Chapter 7.1.2 of the guidelines of World Health Organization of Animal Health (OIE), recognizes five internationally recognized freedoms for animals, i.e: (i) freedom from hunger, thirst and malnutrition; (ii) freedom from fear and distress; (iii) freedom from physical and thermal discomfort; (iv) freedom from pain, injury and disease; and (v) freedom to express normal patterns of behaviour. The notification allowing jallikattu not only violates various provisions of PCA but also takes away ‘five freedoms’ from animals.

Article 21 of the Constitution guarantees life with dignity which extends to animals as well. Articles 48 & 48A direct the state to enact laws for animal welfare & Art 51A(g) crafts a fundamental duty for every citizen to have compassion for living creatures. In Mirzapur Moti Kureshi Kassab Jamat (2005), the Supreme Court connected these articles and held that by enacting Article 51A(g) one of the objects sought to be achieved by Parliament was to ensure that the spirit and message of Articles 48 and 48-A are honoured as a fundamental duty of every citizen.

Prof Philip Bobbit famously said “If we act lawlessly, we throw away the gains of effective action”. The Supreme Court must be re-approached against this notification either through a contempt petition or a fresh writ petition and an immediate interim stay must be sought. The well advised Tamil Nadu government has already filed a caveat in the Supreme Court seeking that if a case is filed then its opinion shall also be heard. This preparationsuggests that the notification was politically motivated. The timing of notification just before the festival restricting the scope of challenge also ferrets out political arrangements and surreptitious motives. In any case, the same government which had an election agenda to shield the ‘holy’cow, seems to be fighting harder to let the male counterpart suffer.I ask myself, perhaps I am too ignorant to ask ‘them’, is the bull not holy enough?