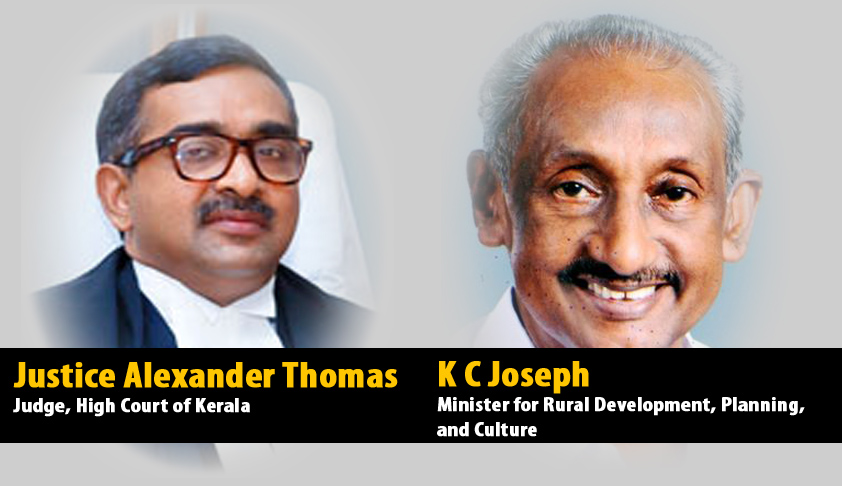 A petition has been filed seeking sanction of Advocate General of Kerala for initiation of contempt of court proceedings against Kerala Culture Minister KC Joseph for his remarks against Justice Alexander Thomas. The petition has been preferred by Advocate J S Ajith Kumar. K.C. Joseph had taken to his face book page to express his displeasure at the remarks made by Justice Alexander Thomas in open court at the conduct of the government pleaders, office of the Advocate General, and even the Chief Minister. His remarks were reported widely in the print and electronic media.

The petitioner alleges that the statement was willfully and deliberately intended to cast unfounded aspersions against the sitting judge of the High Court attributing personal motives to a judge who was discharging his official functions.

The petitioner states, “The respondent (Minister) deliberately did that knowing fully well that what he attributed to the judge was false as the respondent himself stated that he knew the past life of the judge before he became a judge.” It shows that the minister has some personal grudge against the concerned judge, the petition said.

The petitioner further says that it is settled law that attributing motive to a judge in the course of discharging his functions of a judge amounts to gross contempt as no judge will be safe from such imputations if made about his official duties. Accordingly, he has sought sanction to be granted by the Advocate General to file a contempt case against K C Joseph before the High Court of Kerala.

In another related development, the All India Lawyers Union (AILU), has approached the High Court directly by filing a petition seeking initiation of contempt of court proceedings against Minister KC Joseph for his remarks against justice Alexander Thomas.

Seeking the court's intervention AILU has alleged that the minister's comment published on Facebook, and reported by three vernacular dailies, is self-speaking and was evidently meant to scandalize the judge and the high court. It is nothing but a wilful interference in the free flow of justice. It constitutes contempt of court and the issue involved has a greater impact on the administration of justice and on the justice delivery system, the petition said.

It may be recollected that in an earlier occasion, Minister KC Joseph had made certain scathing remarks against two high court judges, Justice Harun ul-Rashid and Justice SS Satheesachandran. They were criticized for their actions while performing judicial functions, as in the instant case.