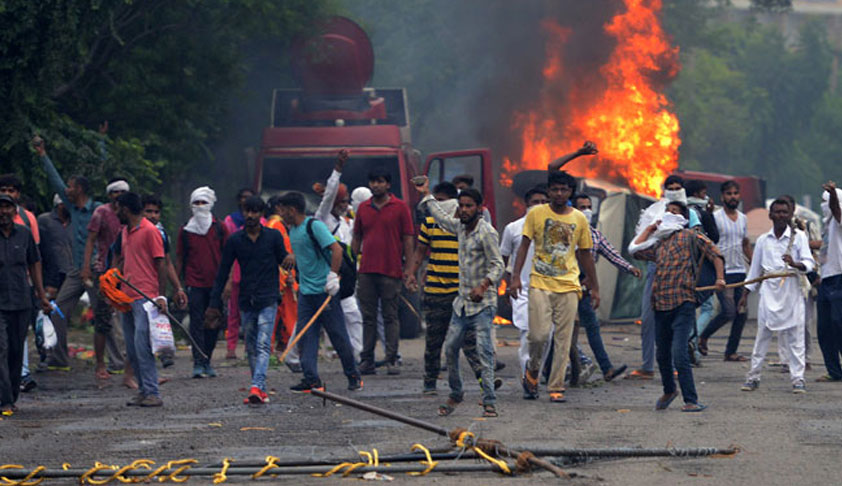 Following the mayhem and large-scale damage to public and private property caused by the supporters of Dera Sacha Sauda chief Gurmeet Ram Rahim on him being held guilty of rape, the  Punjab and Haryana High Court on Saturday called for a list of persons killed in the mayhem and the government's plan for averting a repeat of Friday's chaos.

The court also directed the state of Punjab and Haryana to submit a list of dera's assets for attachment to make good the damages caused by its supporters.

A bench headed by Chief Justice SS Saron said: "...as an interim measure, the Deputy Commissioners in the States of Haryana and Punjab are directed to identify the assets and properties of Dera Sacha Sauda (respondent No.7) and submit a list of the same in this Court for attachment. The list should include assets, incomes, bank accounts and properties. However, till then, no properties of Dera Sacha Sauda shall be sold, transferred, alienated or encumbered in any manner."

It said, "The Deputy Commissioners in the States of Haryana and Punjab shall invite applications/claims regarding
damages caused to public and private properties which shall be verified and forwarded to this Court through the offices of Advocate Generals, Punjab and Haryana."

It also sought to know the expenses incurred by all states concerned in making arrangements in Panchkula and elsewhere.

In view of the CBI court set to pronounce the quantum of sentence for the self-proclaimed "Messenger of God", the high court directed that the "Learned Advocate Generals of both the States of Haryana and Punjab shall submit in sealed cover their future plans and strategy for preventing this kind of incidents of
violence and arson in future and whether such planning includes the complete sensitisation of Dera Sacha Sauda".

Punjab's Advocate General Atul Nanda submitted a status report stating that there were as many as 51 incidents in Punjab and 39 FIRs registered.  Besides, 19 miscreants were arrested, including one Gurdev Singh, who is a state-level office bearer of Dera Sacha Sauda.

The bench was informed about the disruption in train services in Malwa region.

Baldev Raj Mahajan, Advocate General of Haryana, submitted that there were 32 fatalities in Haryana, out of which 28 were in Panchkula.

Of the 28 bodies, one was identified. As many as 524 persons were arrested in Panchkula, eight FIRs registered, besides recovery of petrol bombs and other arms.

Meanwhile, the court's attention was drawn to a news report claiming that five persons, namely Aditya Insan, Dhiman Insan, Dilawar Insan, pawan Insan and Mohinder Insan were instrumental in instigating the crowd to engage in rioting.

"A copy of the news item has been given to the learned Advocate General, Haryana. The news item shall be verified by the police from the Press reporter and if he stands by the same, FIR be immediately registered against those persons. However, the law must take its own course," the bench directed.

The bench also asked the Advocate General of Haryana to verify his stand that Gurmeet Ram Rahim had come to Chandigarh yesterday in five cars, as media reports stated that he travelled in a cavalcade.