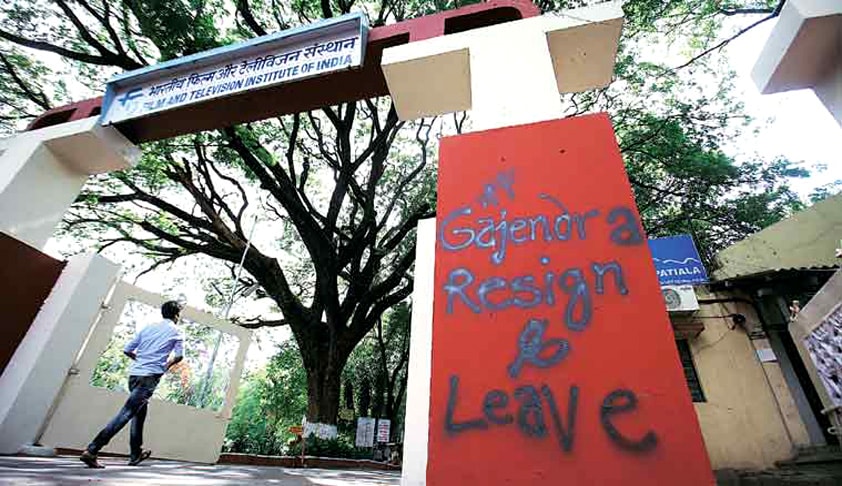 The Bombay High Court today issued notice to the Union I&B and Home ministries, the Maharashtra Government and Vikas, student leader of Film and Television Institute of India (FTII) on a PIL seeking to put an end to the ongoing strike at the Pune-based film institute.

Students have been protesting since the Union Government appointed TV actor and BJP member Gajendra Chauhan as the chairman of the institution.

Supreme Court lawyer Vineet Dhanda had approached the Bombay High Court seeking directions to students of the Film and Television Institute of India (FTII) on a protest to end their strike.

The notices were issued by Justices VM Kanade and Shalini Phansalkar-Joshi, who heard the Public Interest Litigation (PIL) and asked the parties to respond to the petition in two weeks' time.

The Petition claims that some of the students who want to attend classes are being prevented from doing so.

The Petition urges that students and the government do not want to end the crisis through dialogue, thus disturbing the nation and education system. The right to education is an important Fundamental Right and the Government is duty-bound to safeguard it.

The PIL also prayed for a direction to the Centre to make transparent policies for the appointment of heads/chairpersons of such institutions in future.

The Union Ministries of Information and Broadcasting and Home are respondents in the petition, which has prayed that the Centre may be directed to end the ongoing crisis at (FTII) and also sought that those students who want to attend the classes may be allowed to do so under police protection.

The I&B Ministry has, however, cold-shouldered their main demand for cancellation of Mr Chauhan's appointment while keeping the dialogue channel open to resolve the prolonged deadlock that has brought academic activity on the campus to a standstill.

The Lawyer for the Petitioner said that 18 students were ready to attend the classes immediately, provided police protection was given to them.

Further directions are sought for the Government of Maharashtra to protect the students' interest and security, especially for those who are willing to attend classes but are being prevented by anti-social elements.

The Advocate had earlier filed a Petition in the Supreme Court on the same grounds was disposed off without any directions.

He said that, “The students are demanding that a more experienced and talented person from the industry may be appointed as the head of FTII so that they can benefit from his teaching. The students have been boycotting classes since June 12, opposing appointment of Mr Chauhan, who they claim lacks credentials to head FTII.”