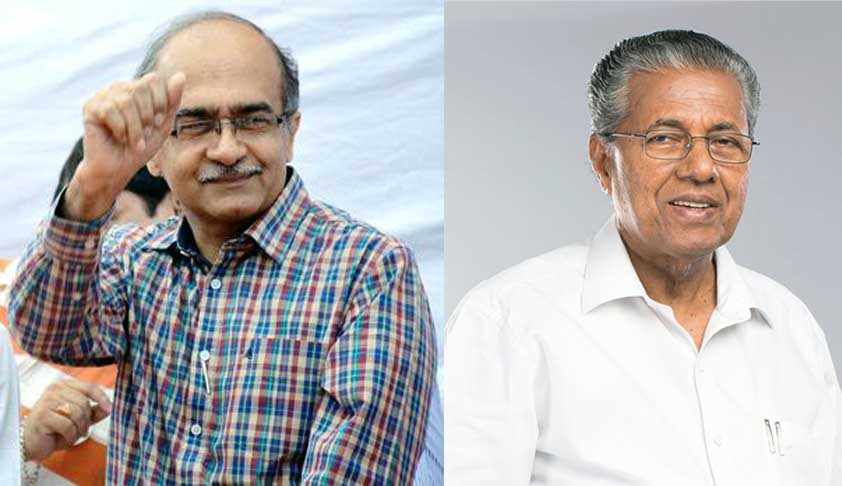 “if any such action like culling are taken by your government then we will be forced to take out a contempt petition in the SC with urgent mentioning… I request you to maintain restraint and calm in dealing with the situation”: Bhushan to Kerala Chief Minister Pinarayi Vijayan.

Bhushan has even warned of moving the Supreme Court seeking contempt action against the state if it went ahead with the plan.

The letter states that “if any such action like culling are taken by your government then we will be forced to take out a contempt petition in the SC with urgent mentioning” as the action will be in clear violation of the law of the land namely the Prevention of Cruelty to Animals Act, 1960 and Indian Penal Code and even more so it is contempt of Supreme Court of India .

Bhushan pointed out to the Chief Minister that on November 2015 the Supreme Court had ordered a complete stay on such culling and on March 2016, the bench had also mentioned that stray dog issue is mainly of implementation of animal birth control programme and culling is no solution.

WHAT THE ORDERS SAID

“There can be no trace of doubt that there has to be compassion for dogs and they should not be killed in an indiscriminate manner, but indubitably the lives of the human beings are also to be saved and one should not suffer due to dog bite because of administrative lapse” a bench headed by Justice Dipak Misra had said in the November 18, 2015 order.

The March 9, 2016 order said: “We will be failing in our duty if we do not make a note of the submissions of both the sides which are extreme in nature, for example, emphasis and stress have been laid that due to stray dogs, there has been threat to life, health, movement and sometimes security of the human beings. On the other hand, it has been highlighted that the stray dogs are being annihilated without any justifiable reason”.

“If the Municipal Corporation or the local authority thinks it expedient to control street dog population, it shall be incumbent upon them to sterilize and immunise street dogs with the participation of animal welfare organizations, private individuals and the local authority. The animal welfare organizations shall be reimbursed the expenses of sterilisation/immunisation at a rate to be fixed by the Committee on fortnightly basis based on the number of sterilisation/immunisation done”

“HYSTERIA BEING WHIPPED UP”

“Furthermore recently there has been an increasing number of news items coming from Kerala every day about some stray dog incident and it is clear that this is whipping up hysteria against stray dogs through paid news by some vested interests before the onset of Kerala tourism season”, Bhushan alleged.

Referring to a news item four days ago of a 65-year-old lady mauled to death by stray dogs, Bhushan said his office contacted the reporter from the news agency IANS and was informed by him that the report was published without any independent facts to corroborate and was totally based on hearsay.

“I request you to maintain restraint and calm in dealing with the situation. We want peaceful co-existence between all species inhabiting on earth”, the letter said.

“There are a plethora of studies from reputed organizations like the WHO which say that killing is no solution. In India it is being done since independence but there has been no reduction in stray dog population. In fact the Bombay Municipal Corporation had admitted in their official circular that killing of stray dogs does not work and the only solution is sterilization”, says Bhushan.