Breaking: Plea Against Dismissal Of Impeachment Motion Against CJI Withdrawn As SC Refused To Provide The Copy Of The Order Constituting The Constitution Bench 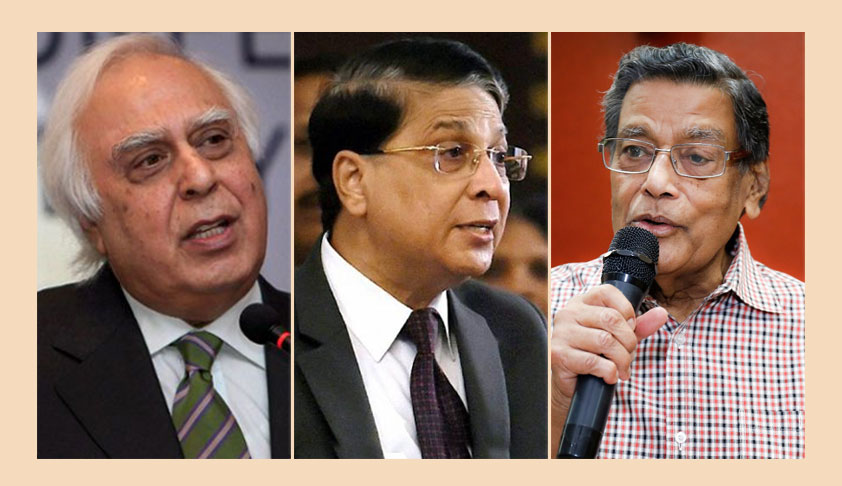 After a hearing that lasted over 45 minutes, the petition instituted on behalf of two Rajyasbaha MPs to challenge the  order of Vice President Venkaiah Naidu in rejecting the Notice of Motion for impeachment of Chief Justice Dipak Misra has been withdrawn by the petitioners on Tuesday as the Constitution Bench has refused to give the copy of the order constituting the Constitution Bench to...

Submitting that the said petition has been referred before the five judge constitution bench, comprising Justices A. K. Sikri, S. A. Bobde, N. V. Ramanna, Arun Mishra and A. K. Goel, by virtue of an administrative order, Senior Counsel Kapil Sibal advanced on behalf of the petitioners,

“Article 145(3) makes it clear that a reference to a bench of five judges for deciding a substantial question of law involving the interpretation of the Constitution may be made only by a judicial order...here, there is no judicial order formulating any substantial question of law for deliberation by the constitution bench...the petitioners are not privy to any such order...the Supreme Court Rules do not permit the Chief Justice to pass an order in this behalf on the Administrative side...if the authority passing the order happens to be the Chief Justice, then the petitioners are entitled to be informed thereof and tendered a copy of the order...”

“Never before has a petition been referred to a five judge bench immediately on filing and by an administrative order...We have to apply our mind to the order and whether it has to be challenged...if Your Lordships say that we may not challenge the order, then this order shall be the only order without a challenge in the history of the constitution...the only exception to the rule of law would be an order passed in exercise of the power of the ‘Master of the Roster’...”, he continued.

“When the matter has been scheduled to be argued on merits, you are praying for the order (referring the present petition to the five judge constitution bench)...you have already questioned the order...now you may proceed with submissions on the merits, otherwise we may feel that there is something else...”, intervened the bench.

When the bench insisted that Mr. Sibal argue on merits, he contended, “the petition has not even been admitted...if someone felt that it involves such a substantial question of interpretation of the Constitution to warrant a reference to a five judge bench, then it must be admitted...”

At this point, Attorney General K. K. Venugopal interjected, “firstly, there has to be some authority by virtue of which the reference to a larger bench may be challenged...secondly, as to the reference being made on the judicial side, it is settled that, say, a two judge bench may require a matter to be placed before the Chief Justice for the constitution of a larger bench...so far as the administrative side is concerned, in some cases, it may be necessary for a matter to be placed before a three judge bench directly by the Chief Justice of a High Court...”

Thereupon, the AG referred to the 2005 judgment of a five judge bench of the Supreme Court in Central Board of Dawoodi Bohra Community v. State of Maharashtra, wherein it was held that the decisions of a larger bench of the apex court shall bind any subsequent benches of lesser or co-equal strength, and that, in the event of doubt as to the correctness of the view in law of such earlier bench, any subsequent smaller or coordinate bench may invite the attention of the Chief Justice for placement of the matter before a bench of larger quorum.

The AG drew the attention of the bench to the two exceptions to the aforesaid rules contemplated in the judgment- “ (i) The abovesaid rules do not bind the discretion of the Chief Justice in whom vests the power of framing the roster and who can direct any particular matter to be placed for hearing before any particular Bench of any strength; and

(ii) In spite of the rules laid down herein-above, if the matter has already come up for hearing before a Bench of larger quorum and that Bench itself feels that the view of the law taken by a Bench of lesser quorum, which view is in doubt, needs correction or reconsideration then by way of exception (and not as a rule) and for reasons it may proceed to hear the case and examine the correctness of the previous decision in question dispensing with the need of a specific reference or the order of Chief Justice constituting the Bench and such listing”

In context of the first exception enumerated above, the AG advanced, “The ‘Chief Justice’ is to be understood as the Chief Justice in exercise of his powers on the Administrative side...”

When the bench sought to rely on the aforesaid exceptions, Mr. Sibal contended, “(in the 2005 judgment), an IA had been filed praying that the matter may not be heard by a seven judge bench, seeking the listing thereof before a Division bench...that is where the exceptions came into play...but we are concerned with the power on the Administrative side...”

During the course of the hearing on Tuesday, the AG raised another objection- “the Notice of Motion for impeachment had been signed by 64 MPs belonging to 7 different political parties...the present petition has been filed on behalf of only 2 of those MPs, both affiliated with the Congress party...this implies that the remaining political parties have accepted the rejection by the Vice President...for this challenge to be acceptable, a resolution must be passed by at least 50 MPs authorising the present petitioners to pursue the same...”

Countering the submission, Mr. Sibal argued, “Which law mandates this? Only a motion for impeachment requires the support of 50 members...”

Sibal again insisted for the copy of the administrative order. The Bench refused it and asked Sibal to argue on merit

When Advocate RP Luthra asked the bench to restrain Kapil Sibal from arguing the matter in the light of a the BCI resolution restraining Lawyer-Parliamentarians, having participated in impeachment proceedings against a Supreme Court or High Court Judge, from practicing or appearing before the concerned Judge/Court, the bench refused to entertain the submission.

II. Reference to five Judges can only be made by a judicial order. The Rules of the Supreme Court do not allow the Chief Justice of India to pass an administrative order to refer a matter to five Judges on the ground that a substantial question of law as to the interpretation of the Constitution arises in the case.

III. In the present case, there is no judicial order formulating the substantial question of law involving the interpretation of the Constitution which is required to be adjudicated upon by a Constitution Bench.

IV. It is assumed, since the Petitioners are not privy to any such order, that the concerned authority took the decision that the issues raised in the petition are required to be adjudicated upon by five distinguished judges after due application of mind on the issues raised in the petition. The Petitioners are entitled to know the authority who on the administrative side passed an order to refer this matter to five distinguished judges.

V. If the authority happens to be the Chief Justice of India against whom a motion of removal on the basis of certain articles of charge was filed and dismissed by the Chairman in exercise of powers under 3(1)(b) of the Judges (Inquiry) Act, 1968, then the Petitioners are entitled to be informed of the order and contend that a copy of the order be furnished to the Petitioners before any proceedings take place.

VI. If that order has been passed by the Chief Justice of India constituting the Bench then the Petitioners seek to challenge the order on such grounds as the Petitioners may deem fit.

VII. It would be inappropriate for the Petitioners to seek any indulgence of this Court on the merits of this case till such time as such opportunity is afforded to the Petitioners.

With these assertions, Mr. Sibal vehemently insisted on a copy of the administrative order for the constitution of the Bench. The Bench, however, refused it and asked Mr. Sibal to argue the case on merits.