Policy making in India political in nature; good of the country not prime consideration: In Conversation with Prof. Homer D. Pithawalla of Government Law College, Mumbai 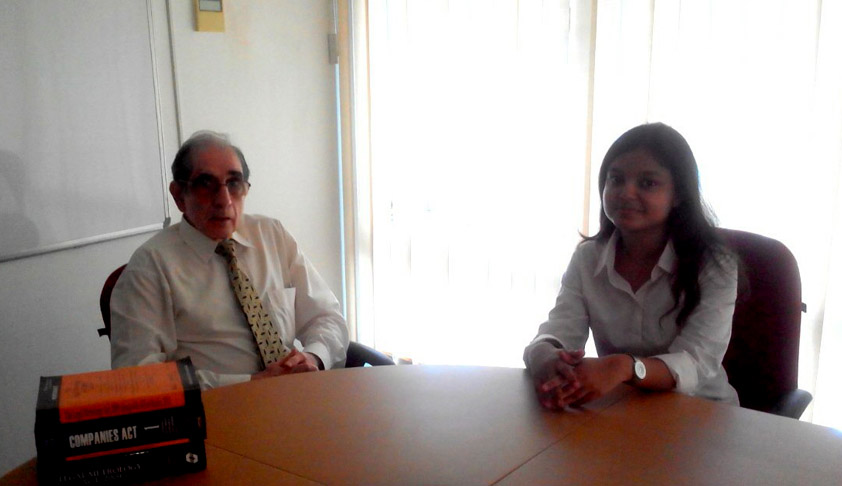 Prof. Homer.D. Pithawalla has been teaching in Government Law College, the oldest law college in India, for 41 years. His students include Supreme Court and High Court Judges, Attorney-Generals, Ministers and advocates all over the world. He is a life member of the Academy of American and International Law of the University of Texas at Dallas, Texas. He was also one of the two Indians selected...

Prof. Homer.D. Pithawalla has been teaching in Government Law College, the oldest law college in India, for 41 years. His students include Supreme Court and High Court Judges, Attorney-Generals, Ministers and advocates all over the world. He is a life member of the Academy of American and International Law of the University of Texas at Dallas, Texas. He was also one of the two Indians selected to attend their Academy several years ago.

He has been his students’ favorite, gratitude flowing from several Supreme Court and High Court lawyers and Judges. In this interview with Live Law, he recalls past and recent anecdotes and ponders upon policy issues and legal education in the country.

Live Law: Sir, you have been invited to lecture at several reputed educational institutions like the Harvard Law School, the Sorbonne Law School at Paris, the University of Cambridge, the International Bar Association, the Institute of Chartered Accountants, the Institute of Chartered Secretaries etc. You are the Vice-President of Franco-Indian Lawyer`s Association (FILA). This is indeed a formidable list of esteemed positions. Could you relate to our readers an anecdote or two from your journey, which took you from being a student on the benches of GLC to an accomplished legal stalwart?

Prof. Pithawalla: Ah! Anecdotes! If you ask me, life itself is one big anecdote! However, I will never forget what once happened in the very first week of my teaching stint at the Govt. Law College, Mumbai. As this took place forty-two years ago, naturally, there was a very thin age difference between my students and me. As I always encourage students to take active part in my class, I had, on that day, called a student to the stage to express his point of view, and whilst he was on the stage, I took his seat on the bench. Suddenly, a peon walked in with a Notice which had to be read out to the class. When the student (who was still on the stage) volunteered to take it, the peon refused to hand it over to him and was about to go away. Seeing this, I instinctively got up from the bench where I was sitting, and went towards the peon with my hand stretched out to take the notice. However, he refused to hand it over to me also, remarking that he would never give an important notice to any student. The class had a very hearty laugh – and I went through a very hearty bout of embarrassment. (To tell you the truth, till date, I am still wondering what that Notice was all about……)

Live Law: Sir, whatever might have been the age difference between the Professor and his students forty-two years ago, it is not the same today. How do you feel about that?

Prof. Pithawalla: Yes. You are right – and thanks for reminding me how old I have grown. In those days, I could have passed off as just one more student in the class. Today, I am not sure if I could – although I am going to try that one day! On a more serious note, let me tell you that I have never let any age difference play a part in the rapport which every teacher has to build up with his students. A good teacher must always interact at the level of his students. If a teacher chooses to stand on his own pedestal, I feel he would never be a successful teacher.

Live Law: Thank you sir for telling us what happened more than four decades ago. Any other more recent anecdote?

Prof. Pithawalla: Well, some years ago, I was on a flight from Delhi to Mumbai, when the gentleman sitting next to me got into a conversation with me. On hearing my name, he immediately inquired if I was, in any way, related to yet another person by the same name, who was a well-known Professor at GLC Mumbai. When I clarified that the two different persons he had in mind were in fact the same, he said: ”Wow! My son was your student more than 15 years ago, and he still remembers you for…….” When his sentence stopped at this juncture with the word ‘for’, I began to wonder whether his son remembered me for my lectures on the Law of Contracts or for my Company Law classes – as these were the two subjects I was teaching at that time. However, my jaw dropped when I heard him complete his sentence. He said: “He still remembers you …….. for the jokes he enjoyed so much in your class.” Once again, I was overcome with a sense of embarrassment. Let’s face it: People often remember you for all the wrong reasons!

Live Law: Not only are you a Solicitor at Bombay High Court but also one at the Supreme Court of England and of Hong Kong. Having had experiences worldwide, how do you feel about the scope of Solicitor's practice in India?

Prof. Pithawalla: Well, even after the “dual system” was abolished in the Bombay High Court, the institution of ‘Solicitors’ is very much alive in Mumbai. Many of us thought that the Solicitor’s examination would also cease to be held in the changed scenario. However, the exam continues to be conducted, and interestingly, the number of students taking this exam has increased tremendously. Incidentally, when I took this exam (more than four decades ago), there were about a dozen candidates appearing for it.

I feel that students should be encouraged to sign Articles and to take this exam – even if he or she is not very sure of wanting to practise as a Solicitor. The tremendous study that goes into the preparation for this exam is, by itself, a valuable learning experience. And then, look at the numbers: How many advocates in Maharashtra? More than a lakh! And how many solicitors? Less than a thousand. These figures speak for themselves.

Live Law: Sir you have authored a multitude of books on diverse subjects like company law, contracts, family law, conflict of laws, property law, constitutional law, legal language to name only a few which are beneficial not only to your students but to established lawyers as well. Do you feel that the prospects of legal journalism are bright in India?

Prof. Pithawalla: Yes. Legal journalism does have a bright future. However, the traditional study of law which we follow today unfortunately does not include the art of legal writing. Our syllabus is absolutely outdated. Sad as it may seem, legal research also finds no place in our curriculum. There is a crying need for an immediate reform.

Live Law: You have been honored by being invited by the Royal Government of Bhutan to draft contract law for their country. The Act is now undergoing translation after which it will be presented in the Bhutanese Parliament.So how would you reflect upon your experience at legislation drafting or rather policy making?

Prof. Pithawalla: Well, to begin with, I was amazed to see that a country was carrying on business activities for so many years without a law governing their contracts! When legal experts of Bhutan expressed a desire to formulate their contract law on American lines, I expressed my hesitation in the matter. And I am glad to tell you that they immediately agreed to my suggestion, namely to formulate their new Act on the basis of the English – and Indian – law of contracts, and that is how the Draft Act was born. I must also add that I was quite impressed with the practical and flexible approach of the legal experts in Bhutan – some of whom happened to be my students!

In our country, policy making (as you call it) often tends to be political in nature. The good of the country is, sadly, not always the prime consideration, and when several pulls and tugs are allowed to play their part, the outcome is naturally not the best possible one.

Live Law: You have donned a plethora of roles during your remarkable professional journey. Which one appeals to you the most and why?

Prof. Pithawalla: My role as a teacher is, no doubt, the most endearing one. This profession has no monetary benefits – at least in India – but has loads and loads of satisfaction. I meet ex-students not only in the courts, but wherever I go – in India, and even abroad. Some of them are with airlines, some with hotels and many others with business houses. Although I may not recognise all of them, they come and greet me with a great degree of excitement – and this is so satisfying.

And then, I have students currently in my class, who come and tell me that their mom or their dad (or even both) had been my students and that their parents still fondly remember my classes. This gives me mixed feelings. I am certainly happy to see that I have taught more than just one generation – but also not so happy to realize how old I am getting!

Just the other day, I got a call from a practising Solicitor who was my student at least 20 years ago He excitedly told me that, when arguing a matter before the court, he suddenly remembered an example I had given in class, and quoted that to the Judge to rebut his opponent’s argument. Needless to say, he won the case!

Live Law: Sir, not only are you are an inspiration for a lot of aspiring lawyers and law students but also many established professionals. Your students include Supreme Court and High Court Judges, Attorney Generals, Ministers, Advocates and several other luminaries from all over the world. What would be your message to them, even today?

Prof. Pithawalla: Well, if these students have attained so high a stature, I think they don’t even need a message! It really makes me happy to see that they have touched such heights by sheer dint of their own hard work. However,

there is one thing that really makes me sad. I am pained to see how almost everything is seen today only from a monetary angle. If this mind-set could change, if we could discard these spectacles which reflect only the financial aspect, India would be a much happier place to live in.