Why Political Parties Should Be Brought Under The Domain Of Right To Information Act? 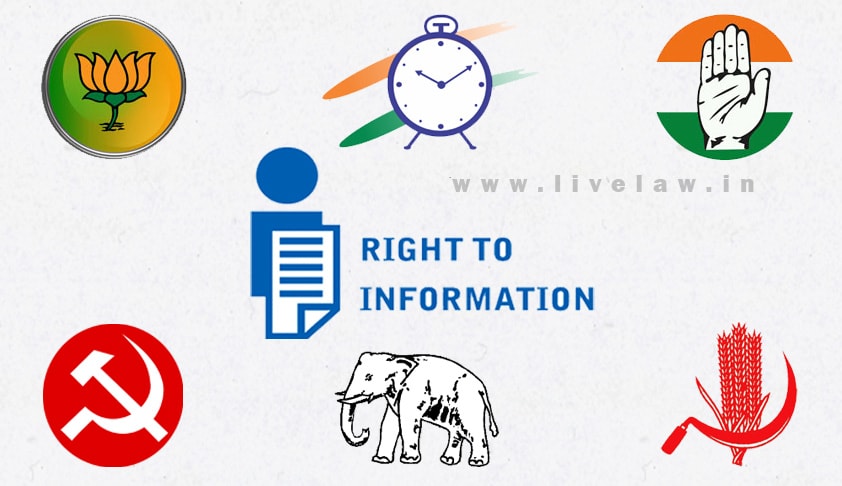 Once again, the matter whether political parties are answerable under the provisions of Right to Information Act, 2005 or not reached Supreme Court of India(SC). A public interest litigation was filed by Advocate Ashwini Kumar Upadhyay requesting the apex court to declare political parties as ‘public authorities’ under Section 2(h) of the above Act. The issue raised in the petition is...

Once again, the matter whether political parties are answerable under the provisions of Right to Information Act, 2005 or not reached Supreme Court of India(SC). A public interest litigation was filed by Advocate Ashwini Kumar Upadhyay requesting the apex court to declare political parties as ‘public authorities’ under Section 2(h) of the above Act. The issue raised in the petition is quite pertinent as political parties as ‘institutions of governance’ are second to none when it comes to their importance in any democratic set-up. The same issue was raised by Association for Democratic Reforms and RTI activist Subhash Chandra Agrawal before the Central Information Commission (CIC) earlier.

Maturity of institutions is the test of better democracy. The more mature institutions result in democratization of processes and systems. The relevant question here is, how to make institutions mature. Institutions mature when they are made open and accountable. Transparency and accountability are not only constitutional values but also tools to measure the maturity quotient of any system, which claim itself to be democratic. Since law is considered to be the agent of change, the agency of law is often employed to bring about desired positive changes in the system. Right to Information Act, 2005 (hereinafter referred to as RTI Act) is such a law, whose whole aim is to make processes more participatory and institutions/systems more transparent and accountable.

No political party complied with the order of CIC and eventually the Government of India in consultation with other political parties decided to bring a bill to nullify the order of CIC. These purposed amendments to RTI Act were to be retrospective in effect. A lot of controversy was created on this issue and the government of India decided not to press for the amendments and bill was referred to the standing committee of Parliament for further consideration in finer details.

Observing the dilly-dallying attitude of the government, the Association for Democratic Reforms went to CIC for the compliance of its earlier order of 3rd June, 2013. CIC in March, 2015 reiterated its earlier ruling but expressed its inability to get its decision implemented for lack of execution machinery. Ultimately, the matter reached to Supreme Court of India.

The apex court has to decide this contentious issue of whether political parties are liable to answer the peoples’ questions under the transparency law.

The SC has the onerous responsibility of deciding these contentious issues as their logical and reasoned culmination is in the larger interest of democracy. Bringing political parties within the domain of RTI will help in deepening democracy. Democratic institutions have inhibition for opening-up. There is a need of applying the ‘doctrine of shaking up institutions’ which have insulated themselves from the scrutiny of people. Not only political parties have insulated themselves, various other institutions including higher judiciary face less public scrutiny and criticism. In order to be a mature democracy every institution has to open up or it should be made to open-up by ‘shaking it up’.

It is high time political parties and higher judiciary is brought under the ambit of RTI. There are enough exceptions or restrictions on disclosing the information in order to protect the integrity and reputation of the democratic institutions.

It is heartening to know that SC has started suo moto the process of opening-up. The collegium of apex court, headed by present Chief Justice of India Justice Deepak Misra, decided to upload and disclose the reasons for appointment of Supreme judges and appointment and transfer of judges of high courts on its website.

Its opportune time and occasion to reign in political parties and to make them more transparent and accountable to the people. Sooner the better is the mantra. If court decides the matter soon, it will benefit the democracy in the longer run. While attempts are being made to make the functioning of the political parties more translucent by the executive by amending tax laws and introducing ‘electoral bonds’ making the funding process more non-transparent, the judiciary’s role becomes more important. One also expect the highest court to simultaneously decide a petition in which the question whether the office of Chief Justice is covered by RTI or not is pending the decision of the Supreme Court since long. Political parties and higher judiciary need to be shaken- up from their inhibitions to face trial in the court of the people.

Issues raised in the current public interest litigation before SC are old but it raises fundamental questions again which demands innovative and new solutions by the apex court.

Abdul Hafiz Gandhi is the Head of the Department of Law, Unity Law & Degree College, Lucknow.