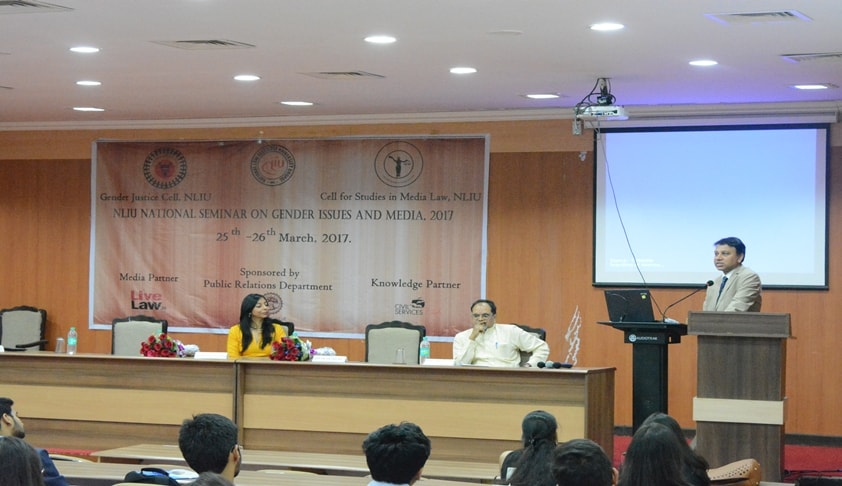 The Gender Justice Cell and the Cell for Studies in Media Law of the National Law Institute University, Bhopal organised the National Seminar on Gender Issues and Media, on 25th and 26th March 2017. The Seminar invited participants and paper presenters from all across the countryThe first session was on the sub theme Media Coverage of Crime Against Women. The panel for this discussion had...

The Gender Justice Cell and the Cell for Studies in Media Law of the National Law Institute University, Bhopal organised the National Seminar on Gender Issues and Media, on 25th and 26th March 2017. The Seminar invited participants and paper presenters from all across the country

The first session was on the sub theme Media Coverage of Crime Against Women. The panel for this discussion had Mrs. Aruna Mohan Rao (IPS), Mr. Diwakar Shukla (Director, Mass Media, JLU).

The session ended with a speech by Mrs. Aruna Rao (IPS) who shared her stories and talked about how the media could be productive if it does the job in a responsible manner

The second session was conducted on the topic of developing Transgender Identity through Social media. The panel included Ms. Laxmi Tripathi and Dr.Bir Pal Singh. The first two presenters talked about the definition of gender, sex and sexuality asking us to go back to the vedas before shaming transgender community on the grounds of religious purity and spirituality. The speaker suggested a fashion show with transgender models as a way of bringing the third gender into the mainstream. The next speaker brought the legal aspects of the transgender community into light. He further talked about the recent Transgender bill 2016 and about the protagonist of the session, NALSA Vs UOI judgment. The session ended with Ms Laxmi’s speech regarding the need to educate ourselves about the evolution of the trans community. Prof Bir Pal Singh threw light upon the need for thorough academic research about trans communities and also spoke about the other side of the coin reminding the audience of how a right should never become a privilege.

The third session dealt with Gender Stereotypes in Entertainment Industry and the panel consisted of Ms. Madhureeta Anand (Independent filmmaker) and Ms. Bhakti Sharma (Sarpanch). The first speaker talked about the creation of stereotypes that are reinforced by films. The second speaker argued that most Indian films don’t create for the depiction of woman’s sexuality and constrain her to rigid characteristics that are dominated by patriarchal norms. The third speaker used the film Dangal to discuss the positive way films can be used to fight the existing patriarchy.

The Session came to close with a speech with Ms. Bhakti Sharma (Sarpanch), who talked about her own personal anecdotes as well as role of women in politics. Madhureeta Anand who talked about the male construct and how male dominated the film society is, how the industry convinces you, makes you feel stupid and forces you to consume these products.

The seminar comprised paper presentations, screening of a documentary as well as the release of the magazine ‘Aishani’. The magazine was a compilation of top articles and caricatures articles exploring the role of media in forming our perceptions of gender identities. The students attempted to help facilitate the discussion and suggest feasible solutions to tackle role of the media. The prize for the best paper presentation was given to Madulika and Akruti from Jindal Global Law School for their paper titled ‘Sexuality and the Entertainment Industry’.

For more details of the events of the first day of the Seminar, click here.
Next Story
Similar Posts
+ View more
Law Firms
+ More