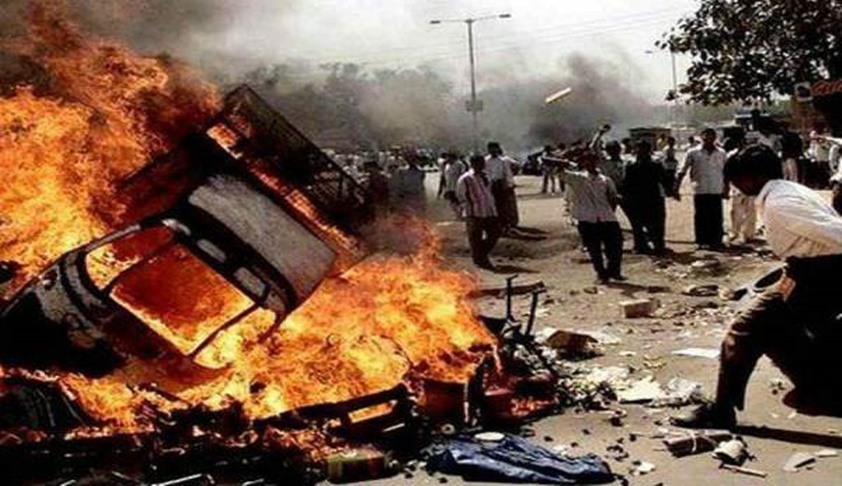 The Gujarat High Court has upheld the conviction of 19 Accused persons in the post-Godhra riots in Oad, a Muslim dominated village in Anand District of Gujarat where 23 people including women and children were burnt alive by a mob in March 2002.

The High Court upheld the Life Imprisonment of 14 Accused for murder, sentenced Five Accused persons to seven years in jail for lesser offences like being a part of unlawful assembly etc -- while acquitting three.

A bench of Justices Akil Kureshi and BN Karia was hearing the appeals of those convicted by the trial court and sentenced to either life term or seven years in jail for murder and other lesser offences respectively.

It was also hearing the appeals moved by the State seeking enhancement of life term to death and also against acquittal of some accused.

After the infamous Godhra train burning incident of February 27, 2002, certain organizations had given a state-wide Bandh call. On March 1, 2002, which was a Friday, crowd started gathering in Oad village, which had a population of 1500 with few pockets of Muslim settlements. The mob started damaging the properties of minority community and pelting stones. Not able to control the mob with lathicharge and teargas shells, the police was ordered to fire in which one Nishit Patel received fatal injuries. The mob thereafter went on to set ablaze houses of minority community. They also set on fire a building called ‘Jhamplivalu Makan’ where many went in hiding. While some rushed out of the building, 23 others were burnt to ashes.

Oad massacre was one of the nine post-Godhra riots cases to be investigated by the Supreme Court-constituted Special Investigation Team under retired CBI director P K Raghavan.

“The   members   of   the unlawful assembly were carrying burning rags, kerosene cans, sticks and dhariyas. They were shouting slogans like 'Kill   the   Muslims',   'Burn   them'.   The   incident   did   not happen on the spur of the moment. The mob went from place to place causing destruction, setting properties belonging to the Muslims on fire till finally they focused their maximum fury around Jamplivalu Makan where many people residing in the locality had taken shelter thinking that they would be safer there.   The   entire sequence of the events lasted for more than one and half to two hours”

“The mob was not a small one comprising barely of a handful   people   of   about   100   or   200   people.   By   all accounts, there were more than 1000 people in the mob. The   accused   whose   involvement   is   referred   by   various witnesses, were stated to be part of such mob. In many cases, witnesses have referred to their active participation though may not be the specific role or precise overt acts. They were at any rate not innocent or mere bystanders. Prudent human conduct of an ordinary innocent citizen would be to remain indoor under such extremely violent circumstances. When we have believed the presence and involvement   of   the  different   accused   through   reliable witness accounts, it is not possible to give them benefit of doubt or acquit them on the suggestion of the defence that being a resident of the same village, they could have been innocent bystanders”.

Not rarest of rare for capital punishment

The high court was of the view that the case did not call for award of capital punishment.

“ The accused were undoubtedly involved in commission of extremely serious offences. The manner of commission of such offence is also extremely gruesome. Large number of people were burnt alive. These were helpless innocent residents of the villages. Many of these people were old people and women and children. Riot was a result of communal frenzy. Despite such factors, we do not think this is rarest of rare case where capital punishment should be awarded.

While deciding the appeals, the bench also observed, “ We have seen the senselessness of violence and loss of innocent human lives. We cannot imagine the pain suffered by the victims who perished in the raging fire. We cannot judge the depth of sorrow and despair that the members of the families of the victims would have felt while helplessly watching their relatives being killed in front of their eyes in most gruesome manner. While we were hearing these appeals we have also seen kind of doom and despair that such incidents bring on the members of the families of the accused. Everyday, we saw old ladies, young housewives with children in toes standing before us with folded hands pleading for temporary release of their son, husband or father citing reasons of death of a near relative, financial crisis in the family, serious illness of the children or such like and simply waiting for the outcome of these appeals.

“This was only to highlight the kind of sorrow and pain that such mindless and needless violence leaves behind. These phenomena which we often describe as communal frenzy turn perfectly normal human beings momentarily into murderous monsters leaving nothing but trail of death and destruction for the victims and his own family alike. There is nothing within our powers to reduce pain and agony of the relatives of the victims or those of the accused. We have only tried to give our judgement as soon as possible to at least reduce the anxiety arising out of the uncertainty”.