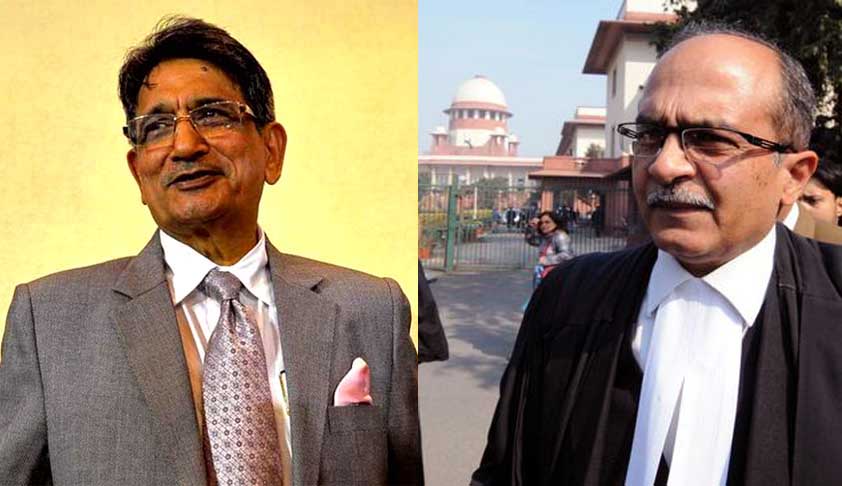 Activist Lawyer Prashant Bhushan has submitted a representation before the Supreme Court appointed Oversight Committee headed by former Chief Justice of India Justice RM Lodha seeking systematic changes in the structure and functioning of the MCI.Bhushan mentions in the representation that he is going to file a Writ in the Supreme Court of India for constitution of an expert committee...

Activist Lawyer Prashant Bhushan has submitted a representation before the Supreme Court appointed Oversight Committee headed by former Chief Justice of India Justice RM Lodha seeking systematic changes in the structure and functioning of the MCI.

Bhushan mentions in the representation that he is going to file a Writ in the Supreme Court of India for constitution of an expert committee comprising of individuals of unimpeachable integrity from both the field of Medicine and Law, to make recommendations to ensure that the MCI can be made to function transparently, non-arbitrarily and fairly, to prevent the scope for corruption and conflicts of interest, and to rationalise unnecessary regulations, so that the objects of the act and the right to health of the citizen is achieved.

Bhushan alleges that MCI has not performed it’s duties as it should have and thus the standard of health of the citizen, the citizens access to doctors and medical facilities have not improved as it ought to have while the cost of healthcare has risen greatly. He has summarized Eight important reasons for MCI’s failure to properly perform its functions and how this failure has adversely affected the citizen’s right to health.

The reasons include the lack of transparency in the functioning of the MCI, and arbitrary decision making process, especially in regard of permission to open new medical colleges and permission to increase admission capacity, which has led to wide scale corruption in the MCI, including many highly publicised cases. This has adversely affected the standard of medical education and the quality of healthcare professionals that the medical education system is producing, directly and adversely affecting the quality of healthcare available to the citizens and their right to health.

“96. BCCI is a very important institution that discharges important public functions. Demands of institutional integrity are, therefore, heavy and need to be met suitably in larger public interest. Individuals are birds of passage while institutions are forever. The expectations of the millions of cricket lovers in particular and public at large in general, have lowered considerably the threshold of tolerance for any mischief, wrong doing or corrupt practices which ought to be weeded out of the system. Conflict of interest is one area which appears to have led to the current confusion and serious misgivings in the public mind as to the manner in which BCCI is managing its affairs.”

“109. The proposed Committee can also, in our opinion, be requested to examine and make suitable recommendations on the following aspects:

(i) Amendments considered necessary to the memorandum of association of the BCCI and the prevalent rules and regulations for streamlining the conduct of elections to different posts/officers in the BCCI including conditions of eligibility and disqualifications, if any, for candidates wanting to contest the election for such posts including the office of the president of the BCCI.

(ii) Amendments to the memorandum of association, and rules and regulation considered necessary to provide a mechanism for resolving conflict of interest should such a conflict arise despite Rule 6.2.4 prohibiting creation or holding of any commercial interest by the administrators, with particular reference to persons, who by virtue of their proficiency in the game of Cricket, were to necessarily play some role as Coaches, Managers, Commentators etc.

(iii) Amendment, if any, to the Memorandum of Association and the Rules and Regulations of BCCI to carry out the recommendations of the Probe Committee headed by Justice Mudgal, subject to such recommendations being found acceptable by the newly appointed Committee.

Any other recommendation with or without suitable amendment of the relevant Rules and Regulations, which the Committee may consider necessary to make with a view to preventing sporting frauds, conflict of interests, streamlining the working of BCCI to make it more responsive to the expectations of the public at large and to bring transparency in practices and procedures followed by BCCI.”

-  The first and foremost thing is that the inspections should be video recorded, each and every detail of the health professionals and the equipment duly recorded, and all of this put on the website so that the citizens can view it.

-  Conflict of interests, with members of the MCI sitting in boards of colleges whose inspections are to be done means the inspections cannot be expected to be fair. A specialised body for inspections, independent of the MCI needs to be constituted to carry out inspections transparently and fairly.

- Moreover, the criteria for assessment/evaluation and approval under the Establishment of Medical College Regulations, 1999 has a heavy focus on nitty gritties of infrastructure and human resources, but no substantial evaluation of quality of teaching, training, and imparting of skills, which ought to have been there. There are also no safe guards to ensure that the original inspection report is not tampered with in the MCI office, like submission of a copy to the University concerned.

“The Committee, accordingly, recommends that the regulatory framework of medical education and practice should be comprised of professionals of the highest standards of repute and integrity, appointed through a rigorous and independent selection process. This process must be transparent. Nominations could be sought but the reason for the final selection should be made public. The Committee also concurs with the recommendation of the Ranjit Roy Chaudhury Committee Report that:

"In keeping with global standards, and as is the practice in other educational fields in our country (AITCE and UGC) regulatory structure should be run by persons selected through a transparent mechanism rather than by the current process of election and nominations. Of course, keeping in mind the federal nature of the country, adequate provision must be made for the representatives of the States to participate in the regulatory processes.”

“72. ……whenever any complaint of medical negligence or violation of code of ethics is brought before the Council such cases are decided by the medical professional themselves. There are reports that the medical professionals probing into the allegations of medical negligence are very lenient towards their colleagues guilty of negligence and none of them is willing to testify another Doctor as negligent. The immediate impact of this arrangement is that the percentage of prosecution in the medical negligence cases by the MCI is almost negligible. In other countries Non-doctors like patients and social workers are mandatorily made members of the Medical Council and they are known as 'lay members' and on occasions they may even lead the Council as was the case with UK's General Medical Council. The Committee, therefore, recommends that all such cases of such medical negligence should be inquired into by a Committee of experts drawn from various fields and experience including social activists, patient's representative, etc.”

(Emphasis supplied in the report itself)

(i) As per Section 21 of the Act, the complaint would first go to the Disciplinary Directorate, which is headed by an officer of the ICAI (Institute for Charter Accountants of India) and has employees for making preliminary investigation into complaint.

(ii) If the Director (Discipline) is of the opinion that a member is guilty of any professional or other misconduct mentioned in the First Schedule, he shall place the matter before the Board of Discipline. As per Section 21 A, the Board of Discipline consists of a person with experience in law and having knowledge of disciplinary matters and the profession, to be its presiding officer, two members one of whom shall be a member of the Council elected by the Council and the other member shall be nominated by the Central Government from amongst the persons of eminence having experience in the field of law, economics, business, finance or accountancy.

(iii) If the Board of Discipline is also of the opinion that a member is guilty of any professional or other misconduct mentioned in the Second Schedule or in both the Schedule, the matter shall be placed before the Disciplinary Committee, which as per Section 21 B comprises of the President or Vice-President of the Council as the Presiding Officer and two members to be elected from amongst the members of the Council and two members to be nominated by the Central Government from amongst the persons of eminence having experience in the field of law, economics, business, finance or accountancy.

3.0.1 At the end of 4½ years, the need for an independent National Exit Examination is urgent, essential for standardization and is long overdue. Besides theoretical assessment at the end of a professional period, students assessment of skills & clinical competence shouldbe a continuous process throughout the educational programmes by regular weighted objective sessional examinations.

3.0.2 The grades or credits obtained in these must count towards the results of the university final examination at the end of the professional period, with 50% marks for internal assessment and 50% on the year-end external exam. Student feedback must also be taken regarding any improvements in the teaching learning activities.

3.0(b) The final National Exit Exam and its process

3.0.3 Students should take the National Exit Exam immediately after the University exam and be assessed nationally for knowledge and skills. The results of this pre-internship exam may also serve as a Postgraduate entrance exam so that the students are not burdened with another Postgraduate entrance and loose the opportunity of acquiring clinical skills during the internship year because they are concentrating on studying for Postgraduate entrance. For this to happen the role of the National Board of Examination can be redefined, its structure expanded and function made explicit as the single National Exit Examination assessment body. All these examinations and their assessments must be objective. Regular updating of the question banks must be done by using item analyses. The test construction must be based on a balance between difficulty and discriminatory index.”

“5.34 The Committee takes note of the fact that the MCI’s assessment of medical colleges is limited to ensuring rigid conformation to infrastructural and faculty norms and an inspection of the five year examination of new medical colleges. The MCI is not involved in any standardized summative evaluation of the final product- the medical graduate-coming out of new or old medical colleges. The final evaluation, and therefore, the final quality of every medical student, is left entirely to the medical colleges/ universities to assess. The Committee is, therefore, of the considered view that an entrance test alone will not do justice to the entire process and there is an urgent need to introduce a common exit test for MBBS doctors, which will go a long way in standardizing the passing out medical graduates and certify the competencies which are expected to be generated out of him. The Committee accordingly, recommends that urgent action be initiated to introduce a common exit test for MBBS doctors as an instrument of quality assurance and to ensure that the qualities and competencies of a doctor before he starts practicing are guaranteed and standardized in terms of various quality norms."

Therefore, it is necessary that the recommendation of the 2007 report of the working group of National Knowledge Commission on medical education to set up an independent national exit exam must be implemented.