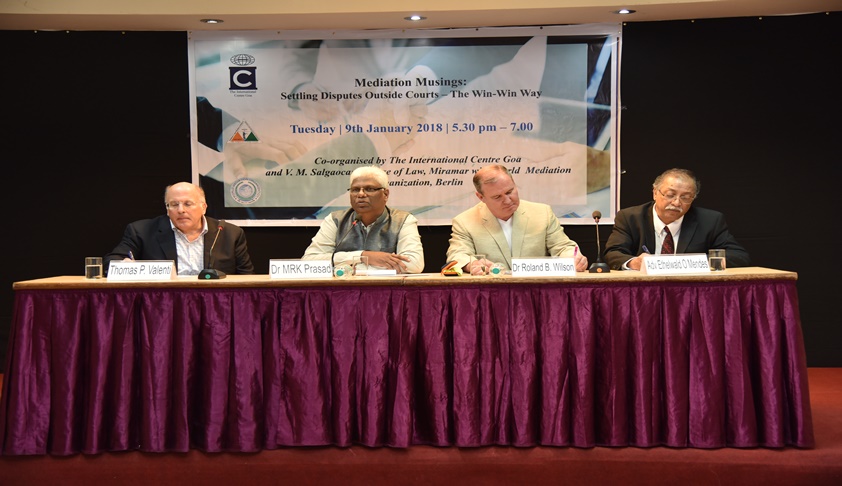 VM Salgaocar College of Law, Goa, in collaboration with the World Mediation Organisation, Berlin, hosted customary ‘Mediation Musings: Settling Disputes Outside Courts – The Win-Win Way’, a prelude to Lex Infinitum 2018, on Tuesday at International Centre, Goa. The theme of the panel discussion was the need to open up the options of dispute settlement to the common man, without resorting to court. The four-day Lex Infinitum 2018 will start on Wednesday.

Speaking at ‘Mediation Musings’, advocate EO Mendes preferred to look at ADR as a method of dispute settlement not merely outside the courts, but which can be court-assisted as well. He said: “I congratulate Salgaocar Law College for its outreach programme taking mediation outside the confines of the college and bringing it to the people.”

Mr. Tom Valenti, attorney mediator and trainer from United States, said ADR is a definite option when it comes to effective settlement of a dispute, and a matured society prefers to settle disputes in the quickest and cost effective manner. He said: “It is great to see more people attend, especially people of the local community who are interested in mediation and powered by a system to solve local disputes.”

Asserting that ADR is here to stay in spite of the court system of dispute settlement, Dr. Roland Wilson, representative from WMO, said: “It is beautiful to see such a large capacity in Goa for the people to understand and use mediation and conflict resolution in their daily lives.”

He remarked that mediation is an alternative to courts and will not substitute the court system, especially in criminal justice. ADR methods are most suitable is settling family and work related disputes, among others.

Responding to advocate Albertina Almeida’s query on ensuring substantive equality at the mediation table, Dr. Prasad opined that principled negotiation to a great extent takes care of power imbalance between the parties and the task is on the mediator to do so. Dr Prasad also highlighted the importance of civil society participation and lobbying to correct the government in matters where arbitration for dispute settlement is resorted to between the government and investors, especially on matters like environment where public have a stake as well.

Audience interaction took ‘Mediation Musings’ to the practical plane of conflicts, options and choices. With the successful response and involvement of community in the Mediation Musings, the organisers are confident that Lex Infinitum will be a grand success.