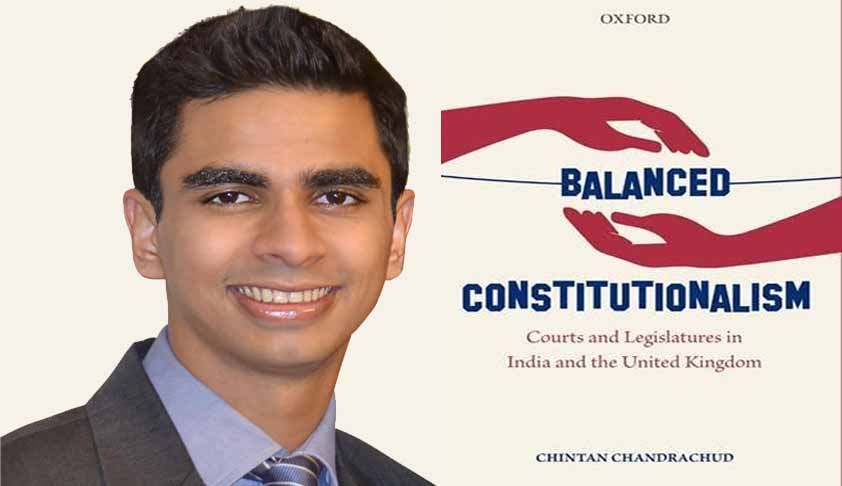 Balanced Constitutionalism (Oxford University Press, 2017) is a rare attempt in the field of Comparative Constitutional Law. In the contemporary times, when the Constitutional systems around the world are debating between parliamentary sovereignty and judicial supremacy, the author of the book, Dr. Chintan Chandrachud, has analysed a “new model” of constitutional review- the doctrine...

Balanced Constitutionalism (Oxford University Press, 2017) is a rare attempt in the field of Comparative Constitutional Law. In the contemporary times, when the Constitutional systems around the world are debating between parliamentary sovereignty and judicial supremacy, the author of the book, Dr. Chintan Chandrachud, has analysed a “new model” of constitutional review- the doctrine of incompatibility in the United Kingdom, by which the Courts, instead of striking down a legislation send the issue back to Parliament for resolution.    The premise of the book is based on the comparison between the working of courts and legislature on rights-based issues in the UK under the Human Rights Act (HRA), 1998 with that of Indian Courts and legislature under the Indian Constitution. The common history between India and UK has been one of the main reasons for choosing these two jurisdictions.

The book is structurally divided into 5 chapters. Chapter 1 of the book sets the scope and course of discussion engaged in the book. The main question, the chapter states, dealt in the book is: “Which model of rights protection provides for a more balanced allocation of powers between the legislature and courts?” While the Chapter 2 examines the political responses to declarations of incompatibility in UK and the striking down of legislations in India under separate heads, Chapter 3 does a comparative analysis of the two and on the basis of case laws and political practice reaches the conclusion that the Westminster Parliament bears no upper edge over the Indian Parliament in propounding its response to judicial review. Moreover, the Chapter states that the responses to judgments striking down legislations in India have been faster than the responses to doctrine of incapability in UK.  Through Chapter 4, the author favours the “new model” over the existing model of judicial supremacy. In doing so, the author relied on comparison between 3 case laws from India- Union of India v Namit Sharma, Suresh Kumar Koushal v Naz Foundation, Kartar Singh v State of Punjab with the judgments of UK Courts in R (Thompson) v. SSHD, Bellinger v Bellinger, Belmarsh Prison Case respectively. Chapter 5 compares the working of the institutional framework (JCHR and ECHR in UK and NHRC in India) accompanying the judicial review in the two jurisdictions. Based on the analysis of the actual working of Courts and Legislatures, the author has concluded that the “new model” leads to a more balanced approach in decision-making. The book also features the political responses to judicial review in the two jurisdictions in tabular form at the end.

The main strength of the book is that the study of the actual practice of judicial review in UK and India has not been dealt in isolation, but all the existing factors affecting the practice have been analysed. For instance, while examining the political responses after judicial review, the author has considered the statements made by Members of Parliaments as a tool in doing so. A key revelation in the book is the impact of the Strasbourg Court (European Court of Human Rights, an international court established by the European Convention on Human Rights) on the jurisprudence of courts under HRA in UK, which is most evident from the following excerpt from the book: “If you come and listen to a human rights case being argued in the [UK] Supreme Court, you will struck by the amount of time counsel spend referring to and discussing the Strasbourg case law. They treat it as if it were the case law of our domestic courts” (quoted on page 208). The author has effectively shown that while a declaration of incompatibility by UK Courts is a “political” question, the confirmation of declaration by Strasbourg Court makes it into a “legal” one, since UK is bound by European Convention on Human Rights. India is, however, not under any such obligation.

The interesting part of the book is that the weakness of the book has been stated succinctly by the author himself. To assert that the courts in UK are more-equipped to deal with rights-based decisions as compared to Indian Courts, the author had relied on comparing 3 leading judgments from each jurisdiction (as named earlier). The author seems to be well aware of the fact that while the Supreme Court of India decides thousands of such cases in a year, the conclusions drawn by him on basis of 3 cases could have been questioned. He has tried to rebut the charge by stating that the cases chosen by him have been amongst the most salient cases decided by the Supreme Court and has used newspaper reports as an indicator to support his argument (page 138).

The author has aptly analysed that the rights based adjudication is done by the Supreme Court of India by testing the constitutionality of the statute, which, however, becomes a limitation to the “decisional space” of the Supreme Court ultimately. Though I agree with the author’s criticism of the reluctance of the Supreme Court to strike down legislation (which are found to be overtly against fundamental rights), I feel that Indian democracy is too young to be experimented with the “new model”. The Basic Structure doctrine, on which Indian constitutionalism rests, was a warning, as Raju Ramchandran observed, to “a fledgling democracy of the perils of brute majoritarianism”. Taking the argument further, even if the Indian Courts start making an informal declaration of incompatibility, it is highly unlikely that the Legislature would comply with it. Unlike in UK, where the compliance of doctrine of incompatibility is accompanied and endorsed by institutional framework of Joint Committee on Human Rights (JCHR) and Strasbourg Court, there is no such institutional apparatus available in India. This is manifest from the fact that Supreme Court of India is considering the grievance of the National Human Rights Commission (NHRC) that it has become a “toothless tiger”. The Indian Supreme Court should, instead, shed away its unwillingness in striking down legislations, which are violative of fundamental rights. It would relevant here to quote an excerpt from a speech of Lord Neuberger (of UK Supreme Court) delivered at a Conference (4 December 2015): “[W]e must always remember that Parliament has democratic legitimacy – but that has disadvantages as well as advantages. The need to offer oneself for re-election sometimes makes it hard to make unpopular, but correct, decisions. At times it can be an advantage to have an independent body of people who do not have to worry about short term popularity.”

Overall, the book is a must read for the students of comparative law. One can find a continuous flow while reading the book. The book has been beautifully structured. The author of the book, Dr. Chintan Chandrachud, must be congratulated for the detailed analysis of the “new model”. It is hoped that he would make further valuable contributions to legal academia.