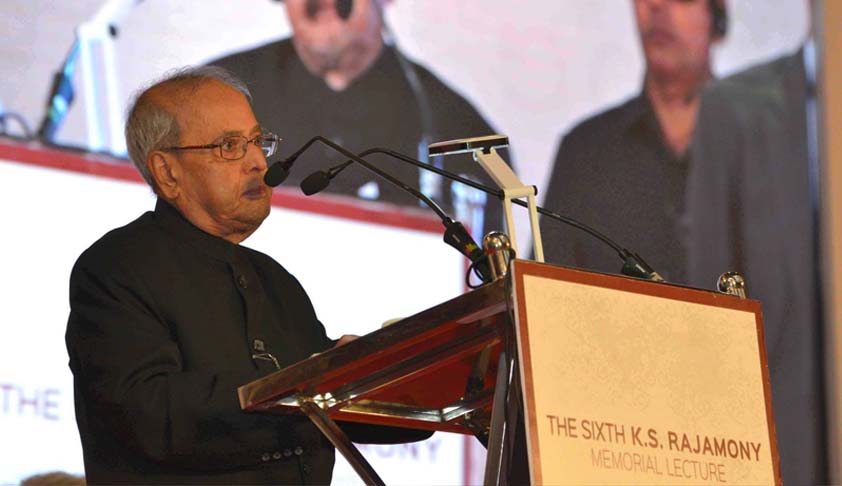 Harking back to India’s inspiring journey from 0 per cent growth rate to the world’s fastest growing economy over the past 70 years, President Pranab Mukherjee spoke at length on the vitals of our growing and democratic nation on a road fraught with challenges.Speaking on the occasion of 6th KS Rajamony Memorial Lecture, held in honour of eminent lawyer and former member of the Kerala...

Harking back to India’s inspiring journey from 0 per cent growth rate to the world’s fastest growing economy over the past 70 years, President Pranab Mukherjee spoke at length on the vitals of our growing and democratic nation on a road fraught with challenges.

Speaking on the occasion of 6th KS Rajamony Memorial Lecture, held in honour of eminent lawyer and former member of the Kerala Public Men Inquiry Commission KS Rajamony, President Pranab Mukherjee said, “The ultimate goal of any democracy is the empowerment of the individual, irrespective of his economic, religious or social standing. This may appear to be a utopian dream for many, but the strength of a system lies in its capacity to ceaselessly work for its accomplishment.” He pushed for continuous empowerment of the marginalised sections of our society and to create a political system accessible to all, irrespective of socio-economic status.

Reflecting on the current unrest in educational institutions, he said, “Our premier institutions of higher education are the vehicles on which India has to propel itself into a knowledge society. These temples of learning must resound with creativity and free thinking. Those in universities must engage in reasoned discussion and debate rather than propagate a culture of unrest. It is tragic to see them caught in the vortex of violence and disquiet.”

He further asserted that “there should be no room in India for the ‘intolerant Indian’. Our society has always been characterised by the open contestation of diverse schools of thought and debate as well as discussion. Freedom of speech and expression is one of the most important fundamental rights guaranteed by our Constitution. There must be space for legitimate criticism and dissent”.

Before deliberating on the issues facing India, he praised Kerala for its impressive records in the field of literacy, education, health, gender equality, tourism and culture.

Putting in a token of appreciation for Kerala’s legal fraternity, he said, “Judges as well as lawyers enjoy high reputation across the country.  Luminaries like Justice V.R. Krishna Iyer made very valuable contributions in delivery of justice to the poor and underprivileged.”

Touching various facets of our growing economy, the President encapsulated his thoughts under the head ‘[email protected]’.

Dwelling into our glorious past with impressive growth rate, he said in the Past 70 years, tangible change could be seen in every aspect of our lives. He said India has transformed itself from a poor under-developed nation into the third largest economy in the world in PPP terms within a short span of seven decades.

The President, however, expressed deep concern over the state of legislative business in the country. He said over the years, time devoted towards legislation has been gradually declining in Parliament.

He stressed on the fact that the legislatures and parliaments are meant to represent people and not ‘arenas for combat’. He said, “Floor tests are not meant to be muscle tests.”  He urged the parliamentarians to take their role as a moral obligation and duty and serve as models of exemplary conduct.

Hailing the legislative infrastructure as ‘central pillars’ of our democracy, he remarked that their dysfunctional acts would lead to an adverse impact on the entire system. Stressing on the central role they play in smooth functioning of the nation, he said, “The debate and discussions which ought to take place in the open in the House of Parliament and Assemblies cannot be replicated elsewhere. When they cease to function effectively, issues spill out onto the streets.  The very basis of our democracy gets undermined.”

Talking at length on the ideals enshrined in our Constitution, he urged the nation to be conscious of the fact that our democracy requires constant nurturing and no cost should we allow the exploitation of the fault lines. He said the Constitution is the most important legacy bequeathed to us by our founding fathers and dealt with the timeless values of democracy, social, economic, political justice enshrined therein, which under no circumstances, be compromised with.

He further said the notion of good governance must be defined by the need of the times and enriched by the experience of the decades.

Drawing from the ethos projected in the Preamble, he said achieving social justice and transforming rigid mindsets, requires contribution, not just from the legislature, but from every stakeholder, including the citizens. He said the ultimate goal of any democracy is the empowerment of the individual, irrespective of his economic, religious or social standing, marked with equitable distribution of wealth, eradicating poverty and building a strong foundation for a just, equitable and inclusive society. He said, economic development must be a ‘predominant’ aspect of state policy.

“It is important to ensure that there is justice and equality of opportunity and the state does not create conditions in which the privileged few gain at the cost of the multitudes who suffer endemic poverty,” he said while stressing that the fruits of growth and development must percolate to the most marginalised sections.

He further said it was equally important to consolidate the unity of the country in the ‘midst of extraordinary challenges and tremendous diversity’ unmatched by country in the world. Irrespective of the challenges, he said the nation is standing firm on the firm establishment of rule of law, independent judiciary, vibrant media, the civil society and strong institutions like Election Commission and the CAG.

Expressing deep regret over instances of crimes and discrimination against women, he said, “I do not consider a society or State to be civilised if its citizens’ behaviour towards women is uncivilised. When we brutalise a woman, we wound the soul of our civilisation.”

Terming protection and safety of women a ‘nationwide priority’, he said, “The acid test of any society is its attitude towards women and children. India should not fail this test.”

Stressing on the power and centrality of citizenry, the President said the leaders and political activists must cater to the public and be responsive to their needs. He said people must never be taken for granted and their trust they repose in their elected representatives should never be betrayed. “They must focus on the fundamental task of law making and raising of issues of concern to the people as well as finding solutions to their problems,” he said.

Quoting from the speech made by Dr. B.R. Ambedkar to the Constituent Assembly on November 25, 1949, he drove home the point that working of the Constitution to a large extent depends on the people they choose to represent them and political parties as instruments of governance. Quoting Dr. Ambedkar, he stressed on the need to hold fast to constitutional methods of achieving social and economic objectives.

Reflecting on the glorious yet arduous journey India has been through, he said when India became Independent, many in the world thought our democratic experiment would never succeed, considering the diversity, poverty as well as the lack of education. From a dismal 1-2 per cent growth in sixties, India has come a long way average of 8 per cent growth rate, he said. Commending ISRO’s record launching of 104 satellites at one go, he said India is a global player in IT, pharma, network, research and technology. He compared the current scenario with 1947, when we had no industry worth its name.

Likewise, he said, a phenomenal rise in population has however been accompanied with rise in per capita income, increase in average life expectance, and increased foodgrain production.

“India led a ship-to-mouth existence in the early days of Independence. We had to survive on import of foodgrain from abroad. Today, we not only produce enough foodgrain to feed ourselves, but are also exporting the same,” he said.

Calling upon the need to ‘re-discover the sense of national purpose and patriotism’ that alone can lift our nation on to the road of sustained progress and prosperity, he urged the nation and people to strive hard to restore national pride.

He said, “Let us strive to arrest the moral decline in our society and ensure that our core civilisational values find firm root.  Let us exert ourselves to strengthen India’s pluralism and diversity.  Let us be uncompromising in rooting out violence, prejudice and hatred.”

Summing up on an encouraging note, he said, “I see a very bright future for India. Our Constitutional values, young population and entrepreneurial abilities as well as capacity for hard work provide us the fundamentals required for rapid progress as well as the building of a caring and compassionate society. India has changed dramatically in the last 70 years.  I am confident that in the next 10 years, we will see even greater progress as we steer our nation, focused on further strengthening our open, democratic and inclusive society.”