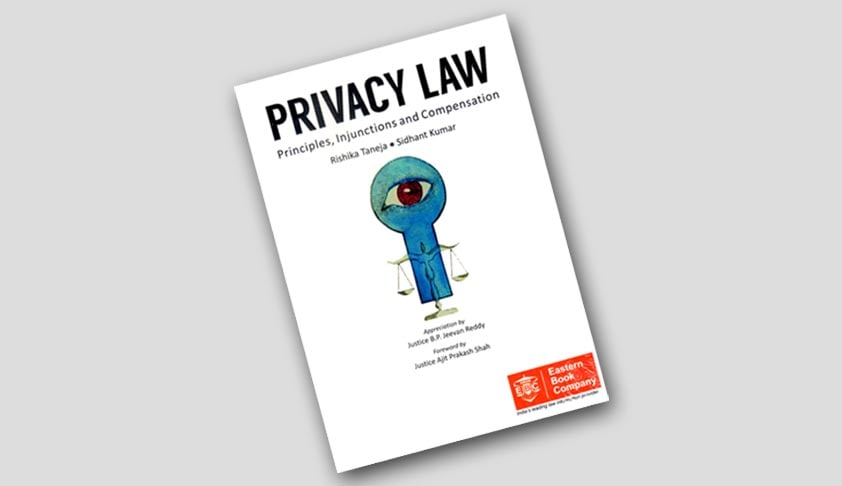 Book Review; Privacy Law ;Principles, Injunctions and CompensationBy Rishika Taneja and Sidhant Kumar,Eastern Book Company, 2014, Rs.1490, Pages 850The question whether the right to privacy is a fundamental right under the Indian Constitution was considered recently in Justice K.S.Puttaswamy (Retd.) and Another vs Union of India by a three Judge bench of the Supreme Court.  The bench,...

By Rishika Taneja and Sidhant Kumar,

The question whether the right to privacy is a fundamental right under the Indian Constitution was considered recently in Justice K.S.Puttaswamy (Retd.) and Another vs Union of India by a three Judge bench of the Supreme Court.  The bench, however, referred the matter for determination by a larger Bench, because it agreed with the Attorney General, Mukul Rohatgi that the legal position regarding the existence of the fundamental right to privacy is doubtful.  The bench said that if the observations in M.P.Sharma and Kharak Singh cases are to be read literally and accepted as the law of this country, the fundamental rights guaranteed under the Constitution of India and more particularly right to liberty under Article 21 would be denuded of vigour and vitality.  The bench felt that the pronouncements made by larger benches of Supreme Court could not be ignored by the smaller benches without appropriately explaining the reasons for not following them.  The bench found certain amount of apparent unresolved contradiction in the law declared by this Court on the question.

This book predates the order by the three-Judge bench placing the matter for determination by a larger bench, and this review appears at a time when the Chief Justice of India is yet to constitute such a bench.  Therefore, the public discourse on the issue does not find a mention in this book.

However, the authors appear to be fairly convinced that the right to privacy is a fundamental right.  In Chapter 5, ‘Balancing Competing Rights’, the authors state that privacy is a right of equal measure as any other fundamental right.  Yet, they suggest that there are several instances wherein the societal or public interest is served by infringement in privacy; therefore, privacy does have to give way for larger public interest.

In the Justice K.S.Puttaswamy case, it is alleged that the Central Government’s “Aadhaar” card scheme, which involves collection of biometric data of the residents of the country, is violative of the right to privacy.  Right to privacy, it is argued, is implied in Article 21.

The book has a section on the Aadhaar Card Project in Chapter 27 dealing with E-Governance and Public Databases: Privacy concerns. The National Identification Authority Bill, 2010 comes for detailed scrutiny by the authors.  Citing the Report of the Group of Experts on Privacy, chaired by Justice AP Shah, the authors assert that the voluntary nature of the collection of biometric information is compromised. The authors are of the view that the Bill has grave implications for the rights of individuals to privacy and data protection particularly in the absence of any law that effect.

The Bill was introduced in the Rajya Sabha by the Ministry of Planning on December 3, 2010 during the previous UPA regime and it has been pending since then.  It was referred to the Standing Committee on Finance, which submitted its report on December 13, 2011. The Committee had recommended that the government reconsider the UID scheme and introduce a new Bill.   More important, the committee felt that the passage of a national data protection law is pre-requisite before any law dealing with large scale collection of information from individuals and linkages across databases.  In the Aadhaar case before the Supreme Court, the Central Government defended the scheme, but there is no information on whether it is keen on reviving the pending bill in Parliament.

The book has six parts. Fundamental principles and framework of privacy law are discussed under Part I.  Part II is the most interesting part in the entire book, with as many as six chapters discussing  the balancing of rights.  Freedom of expression, press freedom, privacy of public figures and celebrities, are some of the issues dealt with in this section.

Part III deals with use of existing torts to protect privacy.  Defamation, breach of confidence, the tort of personality rights, use of tort actions for privacy protection and breach of privacy tort in Indian law are some issues discussed at length here.

The book’s appendices include the relevant judgments of the Supreme Court, and the High Courts, statutory materials and legislative proposals.

Although the book is comprehensive in its scope, it may require updating in the next few years, with the fate of the Aadhaar card scheme hanging in balance.