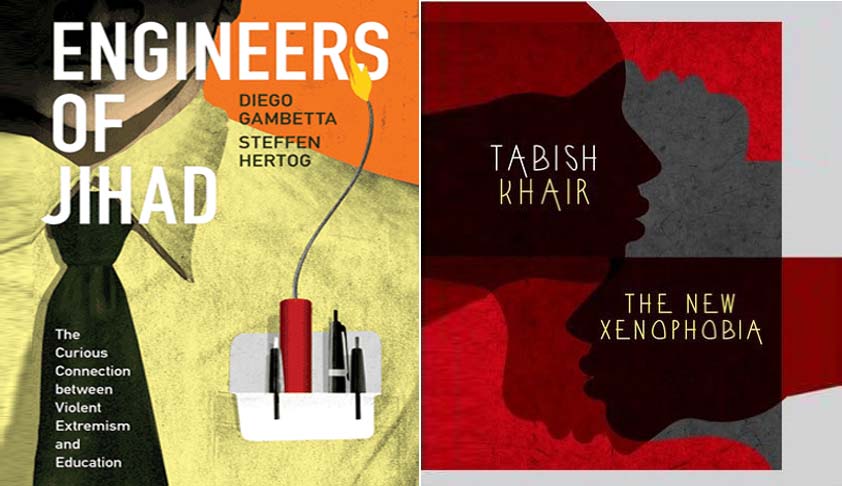 ENGINEERS OF JIHAD: The Curious Connection between Violent Extremism and Education. By Diego Gambetta and Steffen Hertog, Princeton University Press, 2016.THE NEW XENOPHOBIA. By Tabish Khair, OUP, 2016.These two books address different concerns of people living in plural societies.To what extent, our laws aimed at preventing terrorist acts, reflect an understanding of the mind of a...

ENGINEERS OF JIHAD: The Curious Connection between Violent Extremism and Education. By Diego Gambetta and Steffen Hertog, Princeton University Press, 2016.

To what extent, our laws aimed at preventing terrorist acts, reflect an understanding of the mind of a terrorist? Very often, we find that our lawmakers aim at special laws as answers to an extraordinary increase in terrorism and its intensity. But the legislations so enacted are so divorced from reality, they do not achieve their purposes, and on the contrary, they lead to unwanted alienation of minorities from the mainstream.

No wonder, laws like TADA and POTA became so unpopular within a few years of their enactment, and allowed to lapse. But by a curious logic, the prosecutions launched under these Acts when they were in force, continue to have legal sanctity, even after their expiry dates. The number of convictions is too low, and the compensation for wrongful arrests is mostly denied by even the judiciary, as we witnessed in the case of the convicts in the Akshardham attack, who were finally acquitted by the Supreme Court.

Such complex questions concerning terrorism should make our policy makers to pause and address the relevant issues, instead of aiming at harsh laws and harsher implementation of such laws.

One such issue is what makes some people form or join groups of violent extremists. The recent reports from India and Bangladesh, where suspected terrorist recruits reportedly had university education, and better job prospects, are a pointer.

As the authors of the first book under review show, the powers under attack strive to impose their narrative on events, and demonise extremists. The very use of the label “terrorist” is part of the ubiquitous tactic of belittling the enemy’s ends while magnifying their means, they say.

State agencies, under pressure from the paranoia and political impatience that typically inform “counterterrorism” policies, can’t afford the time and mental energy to turn the wealth of information that they possess about extremists into a deep understanding of the phenomenon, they suggest.

There is a yawning gap between what violent extremists can do and what we, the public, really understand about them, the authors tell us.

From their research, they bring out a surprising fact that engineers are overrepresented among violent Islamic extremists. Engineers possess not so much a proclivity to extremism as such but to extremism of a certain type, they suggest.

The authors cite academic Devesh Kapur, for supporting their finding that the Student Islamic Movement of India (SIMI), which is linked to the Indian Mujahedeen, which is part of the world sample studied by them, indeed have a high share of engineers, six of eight individuals with known higher education.

Divided into seven chapters, the book will be of immense use to scholars trying to understand the link between higher education and extremist violence.

Diego Gambetta is professor of social theory at the European University Institute, Florence, and official fellow of Nuffield College at the University of Oxford. His books include The Sicilian Mafia and Codes of Underworld (Princeton). Steffen Hertog is associate professor of comparative politics at the London School of Economics. He is the author of Princes, Brokers and Bureaucrats.

The second book, under review, is a reflective, deeply personal account of what makes contemporary xenophobia new, to probe the impact of neo-liberalism on perceptions of outsiders. The author, Tabish Khair, who began as a journalist in Delhi, now teaches English at Aarhus University, Denmark, and is well-known for his insights as a novelist, poet, and cultural critic.

The relevance of this book for a student of law in India has to be explained. When law fails to address the needs of the times, philosophy can be relied upon to fill the void, so as to understand the law’s failure, and respond to situations which a proposed law aims to tackle.

The failure of successive Governments at the Centre since 2005, to enact a Bill to prevent communal violence, and rehabilitate victims of communal violence, is one such situation, which should make one ponder over why political class as well as civil society do not see eye to eye on evolving legal remedies to address concerns about peaceful living in a plural society like ours. The NDA, which opposed the Bill when it was in opposition, is unlikely to revive it.

Xenophobia, which means mass violence aimed at ethnic cleansing, operates in different ways in the West. The word ‘xenophobia’ is defined as ‘ a groundless or unreasonable fear of foreigners or strangers or of that which is strange’.

Having defined it thus, the author moves quickly to distinguish old and new xenophobia. The new xenophobia, says the author, is deceptive, pulls the strangers in, and consumes, rather than exile them.

Such violence might not mark the stranger out as different, but require that their difference be erased, he suggests.

The author then cites a few paradoxes which makes xenophobia a unique phenomenon. A xenophobe is someone who wants to reduce or eliminate strangers.

Racial attacks on the foreigners, and those who hail from north-eastern States, in public places in India, have caused considerable disquiet about cosmopolitanism. Does it hide xenophobic tendencies of citizens who attack others in the first place? As the author rightly says, it is hard to imagine an acrophobe who goes about demolishing buildings and hills or an ambulophobe who cuts off his own legs!

As the author points out, studies of the Partition as well as of later Hindu-Muslim conflicts inevitably illustrate how people who have shared a culture, a part, or even a childhood, found themselves pushed into the position of strangers who had to be combated. The author distinguishes between ‘pure strangers’ and the ‘stranger within’ to understand this phenomenon.

The chapter on ‘New Xenophobia and Old Xenophobia’ is especially useful to understand how evidence of xenophobic tendencies could be concealed in so-called liberal constitutions. Although the author does not discuss this, can anyone offer a credible explanation why the Indian Constitution distinguishes between citizens and non-citizens, when it guarantees protection of certain rights like freedom of expression etc. under Article 19 to only citizens?

This books makes the Indian reader to introspect such hidden xenophobic aspects of our Constitution and history, to find remedies to the contemporary challenges faced by India’s pluralist society.