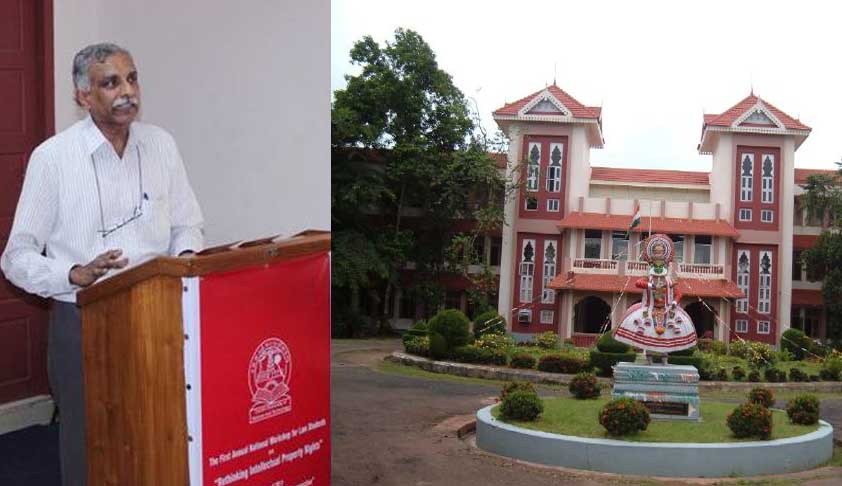 Professor N S Gopalakrishnan who was serving as Ministry of Human Resource Development (MHRD) Chair Professor at School of Legal Studies, Cochin University of Science and Technology (CUSAT) has been arbitrarily removed from his post. An order of the University Syndicate dated 30th July, 2013 has terminated his deputation and has asked him to join his parent department, School of Legal Studies, CUSAT without assigning any particular reason. According to many academics, this seems to be a politically motivated move.

Speaking to Live Law, Prof. Gopalakrishnan said, “To be very frank, I don’t know the reason behind the removal. I was on a deputation and I have returned to my parent department.”

The Charge of the IPR Chair has been temporarily handed over to the Director, School of Legal Studies. A notification has been issued notifying the vacancy of Chair Professor.

A senior official at the Ministry of HRD told, “We are shocked. He is an international expert. He has been helping the Ministry in various matters including policy making, international negotiations and legislative drafting. He has been helping other Ministries also on Intellectual Property law related issues. These Chairs are set up by the Central Government and they have been grooming these Professors, there should be continuity. It’s not like any other subject. If Universities according to their whims and fancies, go on removing the Chairs and Coordinators without informing the Central Government which has set up the Chairs, it would not help in policy making for which the Chairs were established.”

The official added, “Prof. Gopalakrishnan was removed in an arbitrary manner without informing us. We give the grants, salary and all other necessary expenditure for the Chair; they should show the courtesy to inform us in advance. The same thing has been done by National Law University, Jodhpur. They have removed Yogesh A Pai (who was the MHRD Chair Coordinator) without informing us. They are not supposed to do like this. We will take up the issue with the Universities directly; we are writing a strong letter to them. Either they will have to reinstate these people or we will remove the Chairs. We don’t want to give Chairs to those Universities who behave in such arbitrary manner.”

Professor Shamnad Basheer, the MHRD Chair Professor of Intellectual Property at National University of Juridical Sciences, Kolkata exclaimed: “This is simply outrageous and a huge blow to Indian academia! Prof. Gopalakrishnan is one of the foremost authorities on intellectual property from India and perhaps the very first Indian academic to have specialised in this esoteric subject. He is one of the finest teachers and I’ve had the honour of being his student at NLS Bangalore.”

Prof. Basheer added, “This removal smacks of wanton arbitrariness and appears to be politically motivated. It is a well known fact that Prof. Gopalakrishnan put CUSAT on the global IP map owing to his international reputation and advisory role at WIPO. This is a slap on the face of academic freedom and integrity and represents a malicious interference that must be resisted with all the force we have. I hope the Chancellor of CUSAT and the Kerala Educational Ministry takes immediate note and investigates this issue. You simply cannot dismiss a reputed academic like this without rhyme or reason!”

Prof. N S Soman, Director, School of Legal Studies said, “The decision of the University Syndicate has been taken without consulting the concerned department, i.e. the School of Legal Studies. It is only unfortunate that Prof. Gopalakrishnan has been removed without stating any particular reason. They have not taken into consideration the history of IPR in CUSAT, the history of Prof. Gopalakrishnan and his devotion for the last 23 years to this area of law. He was exclusively dealing with IPR issues and was lending much support to the Government of India. It was in that context, the MHRD Chair had come to CUSAT.”

On a similar note, National Law University, Jodhpur removed the MHRD Chair Coordinator, Yogesh A Pai from the post without assigning any reason. Pai told Live Law, “A one line order just mentioned that the University is appointing someone else instead of me. There is no reason cited in the order. I have written to the Ministry of HRD that I have been removed without assigning any reasons.” Pai in his letter to the Ministry of HRD says, “The reason I am clarifying these facts is only to convey that I have not voluntarily resigned from the position of the Chair Coordinator or as an Assistant Professor of Law from NLU, Jodhpur. I have not voluntarily requested the University for relieving me of my services to the Ministry of HRD IPR Chair at NLU, Jodhpur.” Pai’s termination order can be read here and Pai’s letter to the Ministry of HRD can be read here.