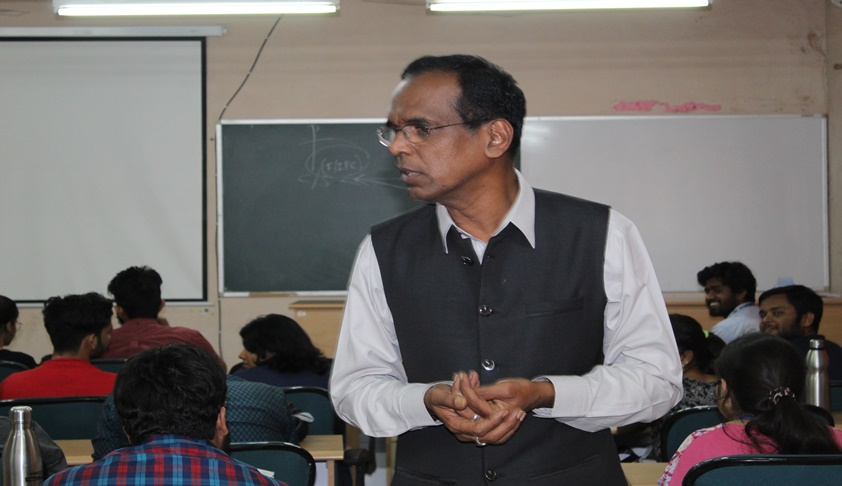 The Maharashtra National Law University, Aurangabad organized the10th Juridical Lecture on Different Perspectives of Law on 21st April 2018. The lecture was delivered by Prof. (Dr.) Tamma Suryanarayana Sastry, Vice-Chancellor of The Tamil Nadu Dr. Ambedkar Law University, Chennai.Dr. T.S.N. Sastry has over two and half decades of teaching and research experience, in the-fields of...

Dr. T.S.N. Sastry has over two and half decades of teaching and research experience, in the-fields of International Law and Human Rights.  He has authored books on state succession, human rights and duties and human rights of vulnerable & disadvantaged groups. He has published various research papers in journals of national and international repute. He was an academic fellow of the Erasmus Mundus External Window.

He began his lecture with the question ‘What is Globalization?’ He then discussed the history of globalization. According to him, globalization started with Karl Marx. Globalization, as we know it, can be described best as the increasing mobility of capital through the transfer of goods and services as well as the greater flow of information across borders due to the improvements in technology and the opening up of new markets.

Dr. Sastry further elaborated upon questions like ‘What is Law?’‘How to see Law?’ ‘What type of science it is?’ He then emphasized on the importance of the Manusmriti.

He also explained the connection between law and society. Law came into being because of society. Had there been no society, then there would have been no need of Law. He compared the Indian Society with western society with respect to culture, etc. Because we imitate Western society, we start creating problems for our society and to address those issues, we need law.