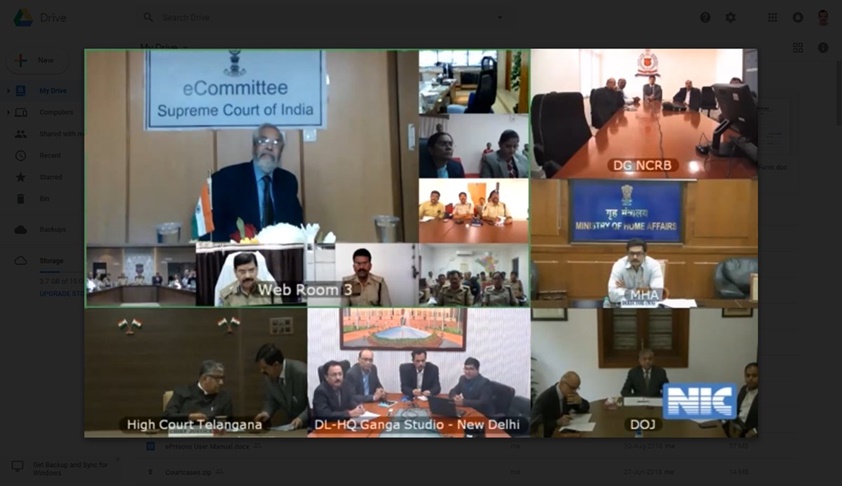 The project for live electronic exchange of data between courts and the police, under the Inter-operable Criminal Justice System (ICJS), was launched on December 15, 2018 in the State of Telangana at Warangal.

The project was inaugurated through video conferencing by Justice Madan B. Lokur, who is the Chairman, ICJS and Judge-In-Charge e-Committee, Supreme Court of India. During the event, a live demo of data exchange from Subedari Police station, Warangal to Principal District Court, Warangal was demonstrated.

Also present were Chief Justice of the Hyderabad High Court, Dr Alok Srivastava, Secretary (Justice) of the Government of India and the Director General of Police, Hyderabad.

While speaking at the occasion, Justice Lokur acknowledged that this electronic data exchange will reduce huge amount of workload for court staff and police. Further, Dr. Alok Srivastava, Secretary (Justice) lauded the project as revolutionary.

An official release said, “The integration between these two crucial pillars of the criminal justice delivery system i.e., courts and police stations is central to the success of the Inter-operable Criminal Justice System. With the digital interoperability between courts and police achieved today In Warangal, the stage is now set for all other districts of Telangana as well as other states to utilise the available IT systems in judiciary as well as police, and integrate both the pillars. It is now crucial for all other pillars also, such as prisons, Forensics, Prosecution, and Juvenile homes to computerize and evolve IT systems and integrate with eCourts. The readiness of the e-Courts system to integrate with other pillars was highlighted.”

The project will allow police officials to send FIR and chargesheet to courts electronically.  The court's software will fetch names of the accused, victim and witnesses and their details, and name of the investigating officer. In reciprocation, the court will send the CNR Number link to the police. The link of CNR number will give them all the details of the case— parties, advocates, date of registration, first hearing, next hearing date, the entire history of the case and the business recorded in the court.

This will reduce the data entry work for the court staff and the police to a very large extent. The police will continue to receive updates, along with all the details of the case, until the final termination of the case.

With the inauguration at Warangal, the stage is now set for other states to follow. The release highlighted the following advantages of the project: