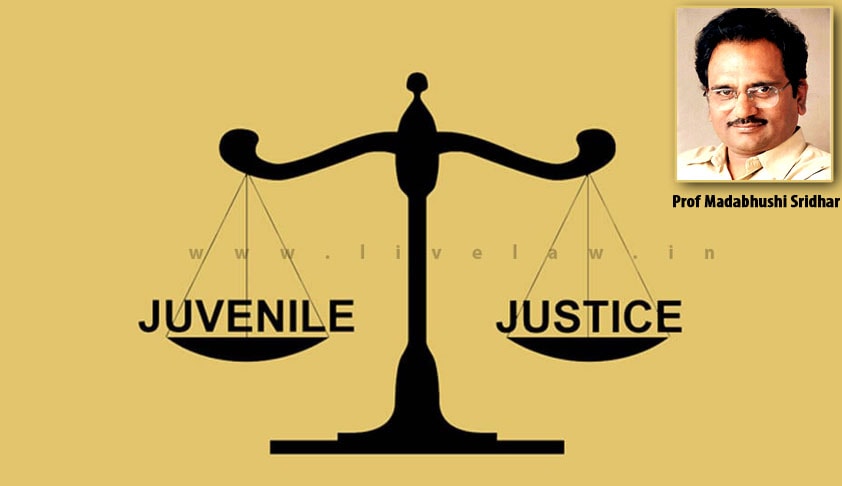 One can understand the trauma parents of Jyothi, Nirbhaya, passed through with that shameful crime in New Delhi. Involvement of a juvenile in that gruesome brutality is shocking. Because of one such juvenile criminal, it is not justified to throw youth of 16-18 years in all coming generations when they are accused of heinous crime into company of adult criminals. Law should not...

One can understand the trauma parents of Jyothi, Nirbhaya, passed through with that shameful crime in New Delhi. Involvement of a juvenile in that gruesome brutality is shocking. Because of one such juvenile criminal, it is not justified to throw youth of 16-18 years in all coming generations when they are accused of heinous crime into company of adult criminals. Law should not facilitate children to turn into incorrigible anti-social elements. Mother of Jyothi has emotionally surcharged the womenfolk and media spread the ‘emotion’ added with sensation and untruthful account that juvenile was cruel, which ultimately manufactured an opinion forcing Congress to support the retrograde law in Rajya Sabha. Reducing the age of juvenile to 16 in heinous crimes is a criminological blunder.

India proudly proclaims to have world’s largest youth that is the biggest human resource. Poverty, child labour and unemployment are the fertile grounds for breeding criminality.

Non-school going child is a potential victim and a serious problem. He is victim of poverty at home, apathy of society and lethargy of government. If left like that he would end up with wrong-doing adults. The juvenile who was convicted for raping Nirbhaya in a moving bus was a cleaner working with other lumpen elements. Having convicted juvenile completed his three year term. His date of release was fully publicized, leading to an outcry fuelled by media campaign.

Media has wrongly reporting that this juvenile offender was most cruel. The juvenile justice law mandates secrecy around the proceedings of the Juvenile Justice Board where the juvenile was tried. It is the Board’s duty to protect the identity of the child. To prevent stigmatization and facilitate the reformation this law needs the records of the juvenile in ‘conflict with law’ is destroyed. Any adverse publicity or social stigma will prevent reform as that fuels revenge.

It is reported that in a recent meeting of Bachpan Bachao Aandolan and Prayas, Mr. Amod Kanth, General Secretary of Prayas openly told the delegates that it was not true to say that juvenile was brutal and actually it was Ram Singh who was the most brutal. Pointing out vengeance as reason he said that Ram Sing had a monetary dispute with him. Kanth knows this because Prayas runs the Boys Home at Ferozshah Kotla, and also stayed in this reform home for a few months.

If the juvenile was brutal, that could have reflected in orders of JJB. More importantly, there was no mention of so called brutality of juvenile in the complaint or deposition of both the victim and her friend. If he was brutal it could have been stated at least in the second stage where victim gave a detailed statement from the hospital or deposition of the friend, who was eye witness. In fact, that friend told that he was held by some criminals along with this juvenile, when others committed heinous act.

In ‘We the people’ tv programme anchored by Barkha Dutt, one of the participants was revealing that the JJ Board report had clearly stated that even though the juvenile was a part of the gang he was not the most brutal, but that person was not allowed to complete his sentence. TV channel preferred live telecast of Asha Devi crying for justice against the release of the juvenile. First post and thehoot.org have brought out several of these facts in their reports. No print or electronic media spread this truth but allowed the outcry to intensify. Wide coverage of news about these agitations and rejection of petitions by courts etc emotionally charged the atmosphere and main opposition party Congress was compelled to support the ‘cause’ of women and bring the amendment to Juvenile Justice Act in Rajya Sabha.

Though Juvenile Justice Board is enabled by this law to examine each and every case and decide whether 16-18 yr accused should be tried like an adult, the consequences of trying juvenile as adult will have serious repercussions on his life and society. As the criminal law will not act retrospectively juvenile convict of Nirbhaya cannot be punished like adult. As per the Article 20(1) of Constitution, ex-post-facto legislation has no validity. It’s a fundamental right that a person cannot be prosecuted under law for an act committed prior to passing of that law.

Most of writers, lawyers and discussants praised this retrograde law (including one in Hans India on 1st January 2016). They believed in retribution and deterrence as only method to prevent crime. They did not think about reasons for juvenile criminality. State has a duty to address criminological reasons to prevent crime, especially when children are involved in heinous crime. That is the constitutional duty. Juvenile Justice Act requires reformation rather than retribution, rehabilitation than deterrence. For adult and incorrigible criminals, reformative theory may not work. It has to be applied to reform juveniles in conflict with law.

Purpose of JJ Act is "not against children but rather provides for, protects, nurtures and keeps them safe," but not if they are 16-18 and accused in heinous crimes. The Supreme Court while dismissing plea by the Delhi Commission for Women against the release of the juvenile convict, posed the question: “Suppose the reformation takes another seven or ten years. Do we have to extend the period of his detention every now and then without any legislative sanction.” This needs to be addressed. Instead the law simply said that children involved in heinous crimes will be treated as adults.

Ms Neelima Mehta, former chairperson of Child Welfare Committee, Maharashtra, and professor of child rightssaid: Reformative justice, not just of retributive justice, which means having the conviction that the child has the capacity to reform and to be rehabilitated. Any intervention should be to work towards reformation, rehabilitation, and reintegration of juvenile-in-conflict-with-law into society. A lot of research went in to convert the UN Declaration to the UN Convention on the rights of children and it was after such a long deliberation that the age of 18 was arrived at by multidisciplinary professionals. As many as 191 countries of the world have ratified 18 as the age of juvenility – of how to define a child. This is the maximum ratified convention in the world and India ratified it in 1992. Other countries, such as the US, have seen children in the 14 to 17 age group coming back into crime after they are sent to the adult criminal justice system and put in jail with adult prisoners.

This ‘reform’ law will not allow juveniles to reform, instead facilitate juvenile to convert into worst criminal. A 16 yr old child has to sit with his adult co-criminal in courts and jails. If proved he will be placed in the same cell with other criminals. Boy emerges out of lock up as a matured criminal, and after punishment he would become incorrigible. If convicted for life, he would come out of jail at age of 35 and would be threat to society with all impunity. Media, women and all of us need to demand the governments not to criminalise the childhood and see that young human resource does not lose their youth in criminality and unemployment.