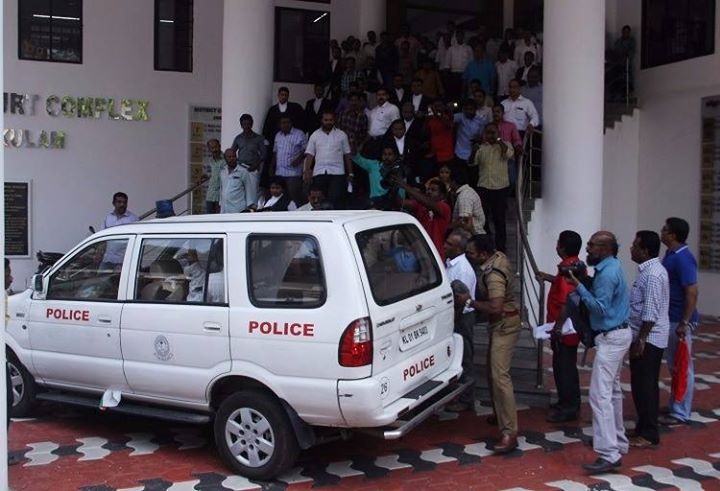 [Pulsar Suni, prime accused in Kerala actor's molestation case was arrested on Thursday from ACJM Court, Ernakulam. At the time of Arrest the Court was not in Session]

Arrest from courtroom is permissible if the court has not considered his application for surrendering. The reason is that police arresting an accused before surrendering is a great advantage to them. Custodial interrogation is a sure thing after the arrest. However, if the accused surrenders, the court need not give him to the custody of police. If police is not given custody of the accused, the interrogation by police would become futile.

There's even a Supreme Court judgment stating that a custodial interrogation is qualitatively different from an interrogation without custody. If police is not able to arrest, there is a high chance that police may lose out in the investigation.

Effectiveness of the interrogation will change a lot de pending on whether it is done after arrest or prior to it. The apex court's judgment was authored by me as judge there and I have even said in it that an interrogation without custody may even amount to something like an interview. Police can arrest an accused from anywhere.

There have been many incidents where the accused have been arrested from courtrooms. If the magistrate has not registered the accused's application for surrendering, it means that the accused has not presented himself before the magistrate as per the records. In such a case, there is no bar for arresting the accused. I won't say that it was wrong on the part of police in arresting the accused from the courtroom. In my opinion, it shows the smartness of the police. Being able to make such an arrest is part of an efficient police investigation. Such action is not wrong legally.