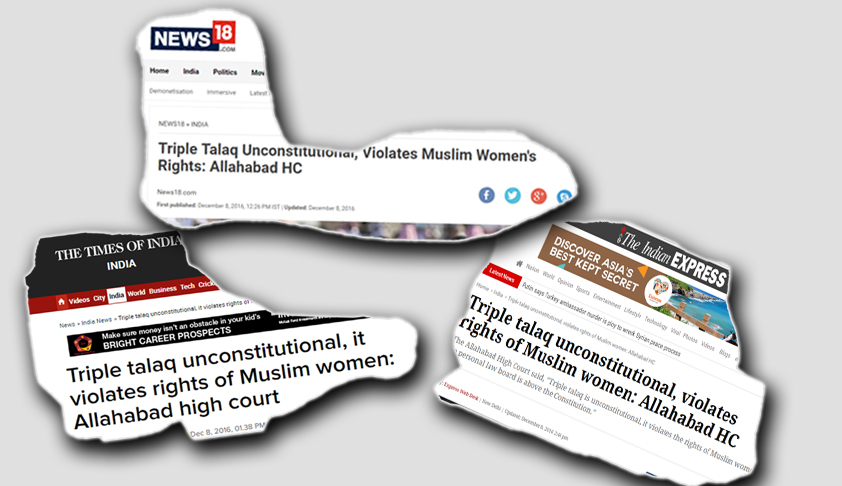 Senior Advocate of the Supreme Court C. Aryama Sundaram in his article [The New Indian Express-18th Dec] wrote wrongly in the opening para – “The triple talaq rule has similarly dire consequences for Muslim women — until the Allahabad High Court, looking aghast at the custom, struck it down.” It has been debated across the country immensely, how incorrect reporting...

Senior Advocate of the Supreme Court C. Aryama Sundaram in his article [The New Indian Express-18th Dec] wrote wrongly in the opening para – “The triple talaq rule has similarly dire consequences for Muslim women — until the Allahabad High Court, looking aghast at the custom, struck it down.” It has been debated across the country immensely, how incorrect reporting (especially sensitive issues like this) leads to much confusion as a large population of the country is not privy to reading the original judgments passed by the Courts but rely, interpret and discuss the news reports and opinions carried and run by newspapers both online and in print. In July, 2014 in a similar instance when Justice Chandramauli Kumar Prasad pronounced the landmark judgment in Vishwa Lochan Madan pertaining to Shariat Courts in India, incorrect news reports caused a lot of ruckus and till the time correct reports followed, a lot of damage was already done. Recently, in Saumya Rape case which attracted much attention as a former judge was called to the court and was issued contempt notice by the Supreme Court for criticizing its judgment, similar incorrect news report were floated by the media regarding quantum of punishment given to the accused Govindachamy. Ultimately, the defect was cured and correct news reports were floated but the instant damage done and havoc created cannot be taken back per se. An accurate rep of why Birla/Sahara diary case adjourned. Most media reports abt recusal of Justice Khehar incorrecthttps://t.co/gvpz3ZUrEb

In the Allahabad High Court’s judgment, the media reports were a product of poor understanding of the court system, lack of clear cut demarcation between what is the ratio decidendi, what is an order passed, what is an obiter dicta and what is merely an observation made by the Judge. Looking at the judgment, there are only two paragraphs which pertain to Triple Talaq –

“The instant divorce (Triple Talaq) though has been deprecated and not followed by all sects of muslim community in the country, however, is a cruel and the most demeaning form of divorce practised by the muslim community at large”

Lately, with advent of micro blogging sites like Twitter and android applications for quick news items, the media has dedicated itself more to break the news than to report the news. In this case, headlines such as : ‘Allahabad High Court rules triple talaqas 'unconstitutional' , “Triple talaq unconstitutional, it violates rights of Muslim women: Allahabad high court”, “Triple Talaq unconstitutional, rules court” immediately made rounds after the judgment without the judgment being even uploaded.

It was later on clarified by other media agencies that contrary to various news reports, the Allahabad High Court had not determined the constitutionality or the legality of the Islamic practice of triple talaq. It had only noted that its “judicial conscience” was disturbed by the practice, which it described as a “monstrosity”.Whether it was a part of a propaganda to term or declare practices in Muslim community as against the Constitution or was a case of careless fact-checking, the latter was the reason that media agencies had announced erroneously that the Kerala High Court had ‘banned’ women from wearing salwar kameezes inside the Sree Padmanabhaswamy temple, when all the court did was just giving an interim order staying the single bench order, pending disposal of the writ appeals.

Looking at what possibly can be a solution to curb the menace of misleading headlines and distorted legal reporting, the best idea is to generate an idea of responsibility and sense of awareness as to cautious choosing of words for headlines flashed and tweeted. Secondly, the concept of instant breaking news and the rat race for being the first among equals should be discouraged. Reporting should be more about quality reporting than quick reporting. Thirdly, academicians and professionals should develop a habit of conducting thorough research before penning a piece down. It is high time that reporters reporting from courtrooms and the editorial desks at media agencies correspond carefully to avoid misleading reports and confusion.