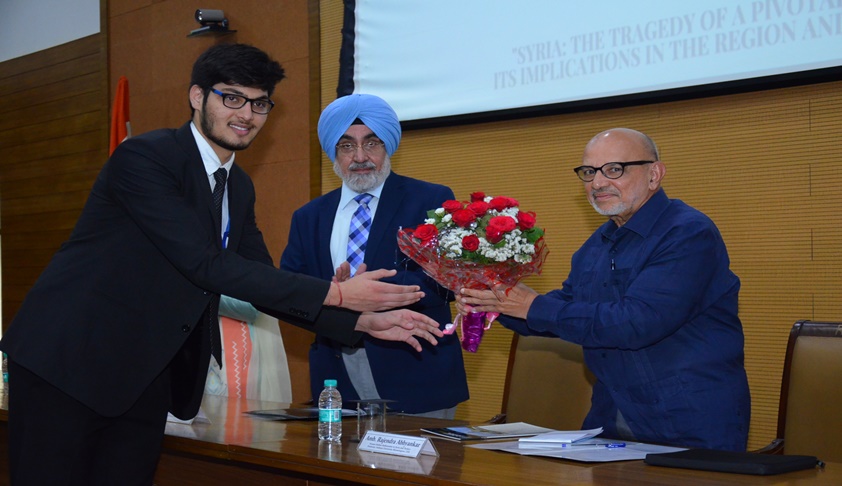 Mr. Rajendra Madhukar Abhyankar, Former Ambassador to EU Belgium, Luxembourg and Professor of The Practice of Diplomacy and Public Affairs, Indiana University, Bloomington delivered a lecture on the topic “Syria: The Tragedy of a Pivotal State and its Implications in the Region and the World”.

Mr. Abhyankar delved into the reasons for the escalation of violence in Syria. Beginning with the Arab Spring, he elucidated the manner in which peaceful protests descended to armed conflict in Syria. “The Syrian turmoil,” he said, “is a manifestation of the long-standing religious struggle.” Despite the support extended by Russian and Iran, Syrians suffered severe human rights violations. “11 million out of 23 million people have been displaced by the Syrian Conflict and even the most of the fertile areas of Syria have turned to saline land due to non-farming,” said Mr. Abhyankar.

He narrated different stories of the displaced people and refugees. The humanitarian crisis that emerged from the discontent with the Assad government has led to breach in International Law also, he remarked. Women and minorities faced discrimination in public sector.

Mr. Abhyankar remarked that creation of conditions to rehabilitate the refugees was of immense importance to restore peace in Syria.

Professor (Dr.) G.I.S. Sandhu, Registrar, RGNUL extended a vote of thanks, to mark the conclusion of the event.