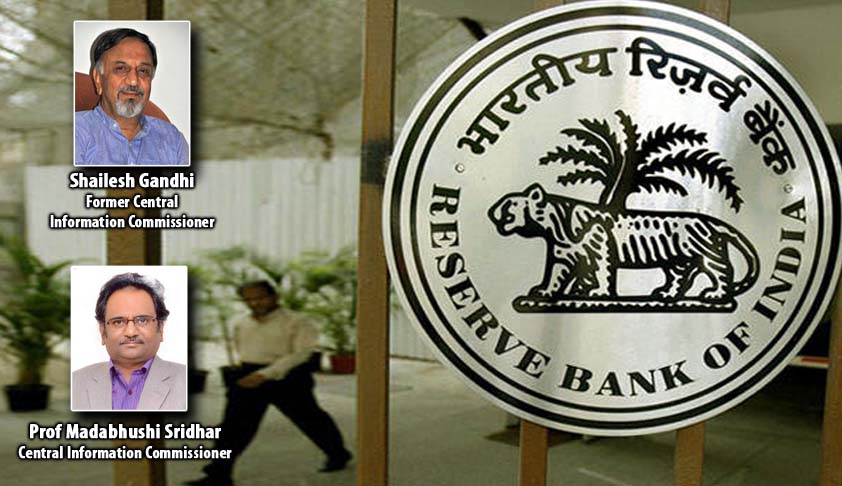 Public authorities have developed ‘fiduciary’ relation as a firm strategy to deny any information about the exercise of their power. Fraudulent financial institutions get fresh lease of encouragement from the regulator as they refuse to disclose, to their comfort. Fiduciary capacity is to take care of the welfare of others and not to affect the same. Even Reserve Bank of India continued...

Public authorities have developed ‘fiduciary’ relation as a firm strategy to deny any information about the exercise of their power. Fraudulent financial institutions get fresh lease of encouragement from the regulator as they refuse to disclose, to their comfort. Fiduciary capacity is to take care of the welfare of others and not to affect the same. Even Reserve Bank of India continued to refuse the information about financial institutions for years despite ten orders from Shailesh Gandhi, retired Information Commissioner and one from Satyanand Mishra, retired CIC.

It is unfortunate that several public authorities including the RBI invoked exceptions wrongly apprehending possible detriment to the nation's economic interest [Section 8(1)(a)], commercial confidence of Banks [Section 8(1)(d)] and fiduciary relationship with the Banks to reject information access when the RTI applicants sought the following categories of information under the RTI Act:

RBI’s duty to comply with RTI

The Supreme Court explained: “In the instant case, the RBI does not place itself in a fiduciary relationship with the Financial institutions …. In this case neither the RBI nor the Banks act in the interest of each other. By attaching an additional “fiduciary” label to the statutory duty, the Regulatory authorities have intentionally or unintentionally created an in terrorem [in fear] effect....RBI has a statutory duty to uphold the interest of the public at large, the depositors, the country’s economy and the banking sector. Thus, RBI ought to act with transparency and not hide information that might embarrass individual banks. It is duty bound to comply with the provisions of the RTI Act and disclose the information sought by the respondents herein."

Even if RBI and the Financial Institutions shared a “Fiduciary Relationship”, Section 2(f) would still make the information shared between them to be accessible by the public. The facts reveal that Banks are trying to cover up their underhand actions, they are even more liable to be subjected to public scrutiny....

Neither clean nor transparent

Supreme Court has surmised that many Financial Institutions have resorted to such acts which are neither clean nor transparent. The RBI in association with them has been trying to cover up their acts from public scrutiny. It is the responsibility of the RBI to take rigid action against those Banks which have been practicing disreputable business practices. (Para 69) From the past we have also come across financial institutions which have tried to defraud the public.

These acts are neither in the best interests of the Country nor in the interests of citizens. To our surprise, the RBI as a Watch Dog should have been more dedicated towards disclosing information to the general public under the Right to Information Act." (Para 70)

The Apex Court dismissed the RBI's plea that the economic interests of the country would be hurt by disclosure. It held: In the impugned order, the CIC has given several reasons to state why the disclosure of the information sought by the Respondents would hugely serve public interest, and non-disclosure would be significantly detrimental to public interest and not in the economic interest of India. RBI’s argument that if people, who are sovereign, are made aware of the irregularities being committed by the banks then the country’s economic security would be endangered, is not only absurd but is equally misconceived and baseless....

It includes in its ambit a wide range of economic transactions or economic activities necessary and beneficial to attain the goals of a nation, which definitely includes as an objective economic empowerment of its citizens. It has been recognized and understood without any doubt now that one of the tool to attain this goal is to make information available to people. Because an informed citizen has the capacity to reasoned action and also to evaluate the actions of the legislature and executives, which is very important in a participative democracy and this will serve the nation’s interest better which as stated above also includes its economic interests. (Para 74).

The Apex Court appreciated the CIC's reasoning saying they do not suffer from any error of law, irrationality or arbitrariness. Earlier Madras High Court in KJ Dorai Swamy v AGM of SBI [(2006) 4MLJ 1877] where the issue was disclosure of names of loan defaulters, held “the provision [Section 8(1)(j)] leaves no room for any doubt that the 'Right to Privacy' fades out in front of the 'Right to Information' and 'larger public interest'. If borrowers could find newer and newer methods to avoid repayment of the loans, the Banks are also entitled to invent novel methods to recover their dues." [by publishing their names, photos and details in newspapers] (Paras 31,32).

Read the full text of the Judgment here.