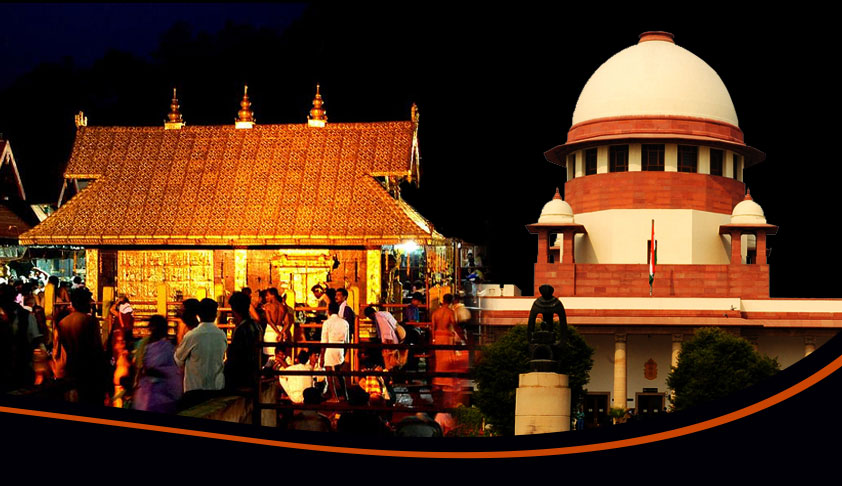 Since the dawn of the Supreme Court Judgment allowing entry of women to Sabarimala Ayyappa Temple, apart from those who see the judgment as one of social reform and justice, there has been a variant of public opinion and discussions, many of them straightforward misogyny and others camouflaged as religious sentiments.Protesters proclaim that women who believe will never put their foot on...

Since the dawn of the Supreme Court Judgment allowing entry of women to Sabarimala Ayyappa Temple, apart from those who see the judgment as one of social reform and justice, there has been a variant of public opinion and discussions, many of them straightforward misogyny and others camouflaged as religious sentiments.

Protesters proclaim that women who believe will never put their foot on the hills where Lord Ayyappa dwells, and they will not desecrate the sanctity of the place and the belief and of their God with their presence. This is solidifying their faith they hold dear, that women of menstruating age are impure per se, and they call it by the name of “religious belief”. It is undisputed fact that the menstruating women are referred to as “thottu kooda” meaning “can’t be touched”, or rather untouchable. In the not so distant past, she was not allowed to enter kitchen, or even domestic spaces and had to stay out in a made up room, those days. When it comes to a call for temple visit, the slang even today is it is “ashudhi for her/me” means she is now impure to enter the holy spaces.

It was on this very biological ground that the Kerala High Court in S.Mahendran v. Secretary, Travancore Devaswom Board ruled against women entry, wherein the High Court categorically stated that woman in the age group of 10 to 50 shall not be permitted to enter the temple “when they are not in a position to observe penance for 41 days due to physiological reasons. In short, woman after menarche up to menopause are not entitled to enter the temple and offer prayers there at any time of the year.”

And this is precisely what the Supreme Court judgment has hammered down, that there can be no faith rooted on gender discrimination. Justice D.Y. Chandrachud’s words glitter throughout his judgment with clarity and constitutional sanctity.  He observed: “The social exclusion of women, based on menstrual status, is but a form of untouchability which is an anathema to constitutional values.” (para 81).

Moreover, the Supreme Court lifting of the ban on women entry is definitely not a mandamus that all women shall enter Sabarimala, and there is no contempt against women for choosing to not go, as much as against the millions of men who have chosen not to go to Sabarimala, over the years. It is all a matter of individual choice. The implication indeed is that the women who enter would be the ones who do not believe in the temple, the Lord and the legend. The implication is also that they would be the ones who would go to prove a point that they too can set foot on Sabarimala like the men. For what a person goes to a place of worship is a matter known only to her, and any assumptions otherwise merely remain so. It is all a matter of individual choice; nothing more, nothing less.

The point most discussed and argued during the Sabarimala Season (in Court) was the celibacy of Lord Ayyappa. Uncanny arguments that the deity too has the fundamental right to privacy under Article 21 had been raised. The claim of protecting the celibacy of men followers was also submitted before the Court, which was brushed away by Justice Chandrachud who remarked, “The assumption in such a claim is that a deviation from the celibacy and austerity observed by the followers would be caused by the presence of women… Its effect is to impose the burden of a man’s celibacy on a woman and construct her as a cause for deviation from celibacy. This is then employed to deny access to spaces to which women are equally entitled... A constitutional court … must refuse to recognize such claims.”

If the pre-judgment discussions were centred more on the claim of protecting the celibacy of Lord Ayyappa, the post judgment claim appears to be that the celibacy under threat was not really that of Lord Ayyappa’s, but of Lay (Le) ‘Ayyappas’, as the male devotees are referred to during the period of piety. The enormous amount of trolls in the social media which is a distinctiveness of Malayali humour and brilliance is now sadly subtly and overtly misogynic. Many a troll is also about how the fall of 377, 497 and this verdict can be intertwined to weave humor cloaked derogatory remarks on women. The concern is about how women would take bath in the holy pampa river and how the men would flock more for that glare rather than for the divine glare up the 18 steps. These anxieties and more have made it evident now that the claim of Lord Ayyappa’s celibacy was indeed a false defense, as the powerful God would find no obstacles in mere mortal women. Moreover ‘brahmacharya’ is truly tested in the company of women and not by escaping from the womenfolk. What is under threat now, with the women entering Sabarimala, looks to be only the spiritual celibacy of those ‘Ayyappas’ of frail and faltering psyche.

The arbitrary fixation of the age of 10-50 years as the age of taboo is also founded on a patriarchal myth that sexuality of a woman and menopause are the same. The inferences from such established doctrines are dangerous, and it is the same sexuality concerns that underline female genital mutilation.

From a harmless comment of a layman friend that “To get divine blessing or ‘punyam, should the Supreme Court pass a judgment? And after all what are they going there for?” to a more sophisticated statement at a lighter note from a lawyer friend that, “I have only one worry, that ‘Ayyappan’ molesting a ‘Malikappuram’ (women devotees are so called) cases would also have to be taken up now on”, discussions are all on the ‘But why?’ and the “Then what all?”!

As Chief Justice Dipak Misra has observed in his judgment, “The dualism that persists in religion by glorifying and venerating women as goddesses on one hand and by imposing rigorous sanctions on the other hand in matters of devotion has to be abandoned. Such a dualistic approach and an entrenched mindset results in indignity to women and degradation of their status.”

Not to leave out the censure of a more ‘unbiased’ group, the criticism is on the futility of the judgment as a gospel of gender justice, as against the existing insecurity of women in public spaces and the violence meted out to her at all levels. The query is “What use is this judgment when such graver issues are unaddressed?” This is again nothing but a devised and carefully transmitted binary approach that will want to wane away the fundamental issue by waxing in another significant issue. And not all those who voice it are aware of the gimmicks on logic and rationality. And the claim that the majority of women do not wish to enter the  temple is unfounded in a constitutional court, as the test of constitutionality is not based on whether the impugned action is approved or disapproved by the majority or not.

Ours is a living Constitution and it has set priorities for social adherence; here the priority is one of equality of women over belief of impurity of women and celibacy concerns of men. The Judgment of the Supreme Court in Indian Young Lawyers Association v. The State of Kerala & Ors is a golden one in the history of our constitutional law, where an age old prejudice and a historic injustice against women has been banished from the constitutional spaces. All genders and no genders can now take up the pilgrimage, which will only bring in more and more devotees to Sabarimala in the years to come. And that prompts us to shift our focus from puerile talk on women and their menstruation and men and their celibacy to more meaningful discussions on how to manage the inflow of pilgrims in the ecologically fragile spaces of Sabarimala and the precautions and restrictions that are to be designed and executed for maintaining the carrying capacity and balance of the abode of Lord Ayyappa.