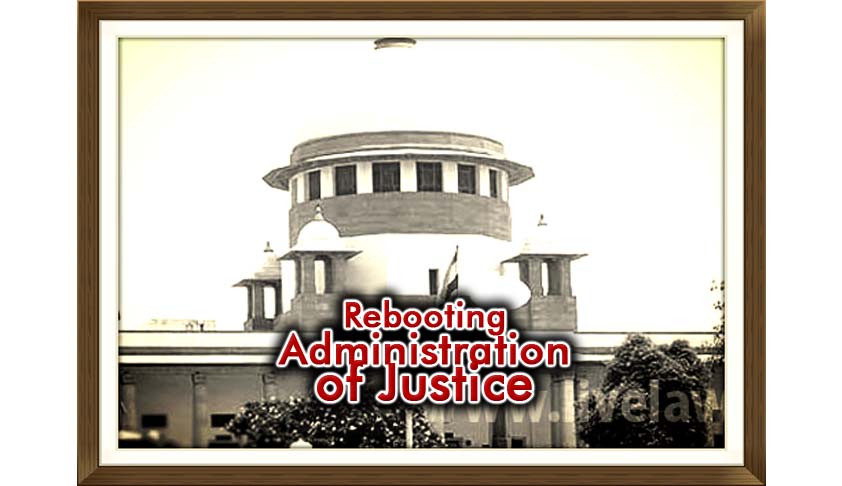 ‘Tarikh pe tarikh’ – This cynical Bollywood expression about the functioning of courts in the country has possibly captured the reality of the system as closely as can be.I have heard this catchy phrase from many consumers of justice on their retreat from court rooms. Last year, the former Chief Justice of India, Justice RM Lodha proposed a novel concept of ‘365 days working court’...

‘Tarikh pe tarikh’ – This cynical Bollywood expression about the functioning of courts in the country has possibly captured the reality of the system as closely as can be.

I have heard this catchy phrase from many consumers of justice on their retreat from court rooms. Last year, the former Chief Justice of India, Justice RM Lodha proposed a novel concept of ‘365 days working court’ to deal with the mounting arrears. The laudable but impractical idea, nonetheless, has evoked the right responses to address the delayed justice delivery system.

However, even without increasing Court days, the ‘administration of justice’ can be fast-tracked by simple ‘pen stroke reforms’ through optimisation of time and resources in the existing system.

Since I am more familiar with the functioning of the Supreme Court of India, let me make a humble attempt to point out the anomalies therein and probable remedies to the same.

The most unpredictable parameter in professionally organising the courts is the Indian system of unending oral arguments. The present-day system of oral arguments is highly lopsided and a standard practice is not followed by our courts. It is highly judge-centric.

Though ‘all are equal before law’, a few judges forget to treat lawyers alike. It is an occupational hazard faced by judges that the competency of lawyers can grab their undue attention and upset the time share. Eventually, rich clients armed with pricey lawyers tend to steal the moreprecious court time. Many of our judges are not adept at the art of court management.

I always wonder at the sight of the ever-changing nuances of our judges in tune with the taste of presiding judges. A fast judge would become slow while sitting with a slow presiding judge and a slow judge gets faster with a faster presiding Judge.

In every aspect of dispensation of justice, the course is determined by the presiding judge, barring extreme exceptions, shaking the very essence of judges sitting in combinations. A case salvaged from getting dismissed gets a fresh lease of life, if it is posted before another bench. Such incidents are many, making me a jurisprudential existentialist. A monolithic court by procedure develops cracks by judge-centric practice.

While mentioning fast judges, a student of the history of the Supreme Court cannot ignore Justice

Markandey Katju’s style of summary disposal of appeals in the shortest possible time. Justice Markandey Katju, as a presiding Judge, used to dispose of 30 appeals which were set for detailed hearing in just four hours’ time, while other benches of the Supreme Court would be taking days to conclude cases of similar magnitude. Even at present, we have faster judges and I can’t name them as it would adversely affect my livelihood.

Is it because the judges who are summarily disposing off matters super computers or super humans? The answer is a definite no. No doubt, some fast judges do enormous homework -- a complete reading of appeal paper books, which are boringly repetitive. The idea of uniformity in judicial functioning may sound utopian, but anomaly does exist to a degree which can’t be ignored. Whatever be the reasons, the system requires rebooting.

Waiting in court corridors for matters to be called out is the most unproductive use of the time of a litigating lawyer and this issue can be resolved with some proactive measures.

The Judicial Registrars of the Court can conduct a pre-hearing assessment of cases before they actually reach the Court. This assessment includes ascertaining the status of the case, service of notices, pending connected matters if any, necessary documents required, the time required by each side for arguments to conclude and most importantly, the date and precise time of hearing.The lawyers being part -- equally -- of the justice delivery system, should be able to plan their work in advance, utilising their time more effectively, ultimately to aid Judges in arriving at a just decision making process.

Batch or group matters are important road blocks in speedy disposal of cases. The service of notices in batch matters will never be complete as fresh matters keep tagging on to the main matter.

In most litigations, where the State is a party -- mainly in the area of education, service and taxation -- a decision in one case would at one stroke dispose of hundreds of cases, not from the Supreme Court alone, but even cases pending in various High Courts. The registry can identify such matters and seek instructions to place them before the Court. Similarly, cases arising from interim orders should be fast tracked. An interim stay granted in any miscellaneous application would have the effect of keeping the entire proceeding pending before the subordinate courts.

The state, its agencies and Public Corporations are the major litigants and the service of court notice to them succeeds only after multiple attempts, wastage of huge amounts of money and court time. This can be resolved by designating an officer to accept service of notices on behalf of every state and corporation.For large institutions and public/private corporations, there should be a designated email address and fixed address for service of court notices and the concerned department, should, in turn, circulate notices to the respective recipient. The service of notice to such designated authority should be treated as deemed service.

Among the nation’s courts, the Supreme Court of India has the most efficient registry but functions with the least flexibility. The charted procedure of filing and numbering of cases in the Supreme Court is an extremely complex affair involving wastage of huge manpower. Since most of our lower court records are not legible, the lawyers are required to file neatly-typed copies of all lower court records with decent spacing and font size. The process of retyping and cross-checking is a daunting task for lawyers; if it’s not done, you run the risk of missing out the most relevant paragraph(s), which ought to be read out to the Judges.

Even those cases where the contesting parties are long dead, appropriate amendments are not made to cause title, leading to various objections at the registry level, leading to additional burden on the Supreme Court registry. The Supreme Court can urge the High Court and lower courts to follow a uniform pattern, paper and font for printing the Judgments as far as possible.

The Supreme Court is fundamentally a court of appeal and as such, presumably, there is no scope for fresh pleadings, except those matters arising from original jurisdiction; even then, parties are permitted to file counter affidavit, rejoinder affidavits and multitude of applications.Of course, judges permit it out of a sense of justice, but it has virtually made the court a court of first instance. The Supreme Court should do away with the practice of accepting counter affidavits/rejoinder affidavits.In most cases, filing of counter-affidavits is necessitated in view of the drafting of Special Leave Petition as an original petition.For a final appellate court, what is required is only bare statement of facts, questions of law to be decided, a decent written submission, judgments and pleadings and documents of lower courts.

Our High Courts indulge in using all kinds of terminologies to refer to different applications and petitions. The Writ Petitions in the Kerala High Court were earlier numbered as Original Petitions and it was properly named only after the direction of a transferred Chief Justice, who was unfamiliar with this weird nomenclature. Uniformity in court procedure should be maintained as far as possible.

The Supreme Court is a better place to practice now. The first half of 2014 witnessed the retirement of one of the most misbehaved judges. If the lawyers had the option of the avoiding a particular judge, 99% of them would have happily opted for it to preserve their self-respect.

A compliant bar is also equally responsible for not correcting the judges when they notice conduct affecting the majesty of justice. Judges are drawn largely from lawyers – as such the character traits imprinted on them are hard to erase.  While constructively criticising, one must mention the wonderful judges we have, possessing monumental patience.

Recently, the Supreme Court witnessed an unprecedented show of patience by two judges. One lady litigant was hurling all kinds of verbal abuses at the judges. The detached judicial minds heard both sides and were gracious enough to grant relief to the lady who had all along been abusing the judges in extremely foul language.

We have judges who are more than courteous, more than patient and down to earth. Lawyers are not against judges. But during the course of arguments, a threat of imposition of huge costs, proportionally with the number of words spoken or time consumed, affects the majesty of the Court. I do admit, some lawyers feel that they have the best case and they continue forever; they must be checked, but in a better way.

Among our judges we have reformists, revolutionaries, conservatives and even a few superstitious ones.We had one judge wearing nine finger rings of all the stones in the world, without risking the chance of missing out on any luck.

I have personally come across the worst of kind of superstition in a lawyer, who is currently a senior High Court judge.A junior woman lawyer desperately hunting for a senior lawyer to practice under was informed of a vacancy in the office of this particular Lawyer. We approached the said gentleman but even before a formal introduction, the lawyer asked for the horoscope of the lady.I was bemused, and before I could give my imagination a free run, he clarified: “Since you are going to sit in my chamber, your horoscope must match mine. Else, it would affect my practice”. He may have had a point; his elevation to the Bench came through a year later.

There are no effective studies conducted about professionally managing our Courts, its day-to-day functioning, judges’ time consumed, manpower spent on each case and so on.

In the Supreme Court, new practice directions are issued by each new Chief Justice, only to be replaced with by a successor. What is required is an effective consultation with all stakeholders, such as judges, court masters, registry staff, senior lawyers, advocate on records, junior lawyers, advocate clerks, state law officers and litigants.

All play an important role and aid in the administration of justice. The second half of 2015 is likely to witness the appointment of judges from a new stream -- National Judicial Appointments Commission (NJAC). Unless the functioning of a court is professionally organised, improving the quality of judges alone is not enough to improve its workings.

P.V.Dinesh is an Advocate practising in Supreme Court of India