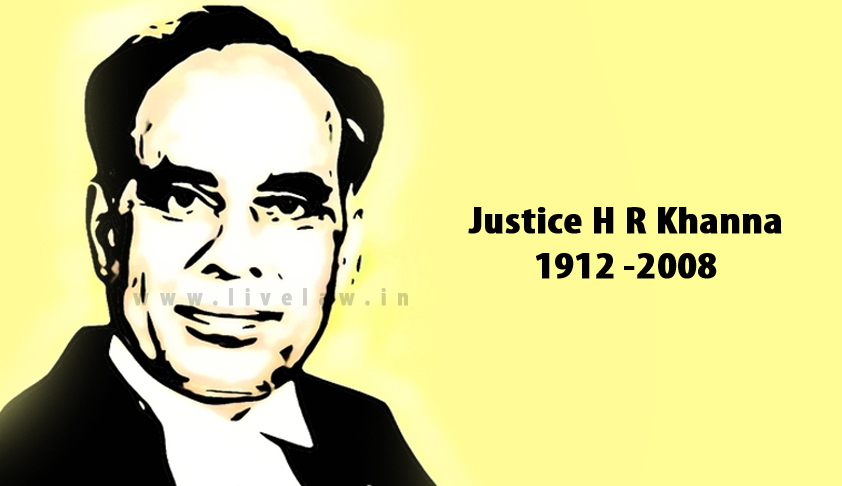 July 3, 2017, marks the 105th birth anniversary of the late Justice HR Khanna.  This is my small tribute to a great son of India.Even after so many years, Justice Khanna's courage and independence continue to inspire and remind generations of lawyers and judges of the sacrifice he made in upholding human rights, the rule of law and the independence of the judiciary.He was born in 1912,...

July 3, 2017, marks the 105th birth anniversary of the late Justice HR Khanna.  This is my small tribute to a great son of India.

Even after so many years, Justice Khanna's courage and independence continue to inspire and remind generations of lawyers and judges of the sacrifice he made in upholding human rights, the rule of law and the independence of the judiciary.

The Rule of Law and Human Rights in India

He became immortal in the collective memory of the legal profession because of his judgment in 1973 in the fundamental rights case (Kesavananda Bharati).

This judgment tilted the balance seven to six against the government, and curtailed the unrestricted power of Parliament to amend the Constitution on the doctrine of an un-amendable basic structure. Outspoken critics of the judgment like HM Seervai, a great constitutional lawyer, changed their view after seeing the excesses of the Emergency.

But Justice Khanna’s finest hour came on April 28, 1976, when he delivered his lone dissent in the habeas corpus case.

Indira Gandhi lost her election case on June 12, 1975, and on her appeal in the Supreme Court, she was only granted a conditional stay. As a result, she could neither vote nor speak in the Lok Sabha. She became a dysfunctional Prime Minister. Immediately thereafter, on June 25, 1975, she proclaimed a state of internal Emergency.

In a midnight swoop, most of the prominent Opposition leaders, including Jayaprakash Narayan, Morarji Desai, Atal Bihari Vajpayee and LK Advani, were detained without charges and trial.

The fundamental rights to life and liberty (Article 21) and equality (Article 14) were suspended.

The press was gagged and censored and orders were passed not to report unfavourable court judgments.

Many persons were detained and habeas corpus petitions were presented for their release on the ground that such orders were ultra vires and beyond the statute or were mala fide.

A bench of five judges of the Supreme Court (Chief Justice AN Ray; Justice Khanna, Justice MH Beg, Justice YV Chandrachud and Justice PN Bhagwati) heard what has come to be known as the habeas corpus case (ADM Jabalpur vs Shiv Kant Shukla). The only question before the court was whether a petition for habeas corpus and other similar petitions under Article 226 were maintainable (notwithstanding the suspension of the fundamental rights) on the ground that the orders were beyond the statute or were issued with mala fide or were not in accordance with law.

On April 28, 1976, four judges decided in favour of the government, holding that the petitions were not maintainable. Justice Khanna was the lone dissenter.

The government’s argument was accepted by the majority.

The Supreme Court, by a majority, closed its door to citizens and there was no remedy against illegal detentions, unauthorised demolitions, official tyranny, torture, murder, and mayhem. The Supreme Court sanctioned “the rule of lawlessness”.

HM Seervai later commented: “Four judgments were delivered in the darkest hour of India’s history after independence, and they made the darkness complete... ordinary men and women would understand Satan saying ‘Evil be thou my good’, but they were bewildered and perplexed to be told by four learned judges of the Supreme Court that, in substance, the founding fathers had written into the Emergency provisions of our Constitution ‘Lawlessness be thou our law’.”

Justice Khanna, in his autobiography, wrote about the habeas corpus case graphically. He said: “In view of his (Attorney-General’s) submissions, would there be any remedy if a police officer, because of personal enmity, killed another man?” The answer of Mr. De (Attorney-General) was unequivocal: “Consistently with my argument,” he said, “there would be no judicial remedy in such a case as long as the Emergency lasts”.”

Khanna’s dissent rejecting the Attorney-General’s argument held the petitions maintainable. It was the only light in an atmosphere of total gloom.

But the reaction in other democratic countries was heartening. The New York Times, on April 30, 1976, came out with an editorial which has become a classic and is cherished.

It said: “If India ever finds its way back to the freedom and democracy that were proud hallmarks of its first 18 years as an independent nation, someone will surely erect a monument to Justice HR Khanna of the Supreme Court. It was Justice Khanna who spoke out fearlessly and eloquently for freedom this week in dissenting from the court’s decision upholding the right of Prime Minister Indira Gandhi’s government to imprison political opponents at will and without court hearings... The submission of an independent judiciary to absolutist government is virtually the last step in the destruction of a democratic society; and the Indian Supreme Court’s decision appears close to utter surrender.”

Justice Jackson of the US Supreme Court said: “Judges are more often bribed by their ambition and loyalty than by money.” Unlike his four colleagues, Justice Khanna did not succumb to ambition or loyalty. His judgment was reminiscent of Lord Atkin’s celebrated dissent in Liversidge vs Anderson during the dark days of the Second World War, when he invalidated an order of detention without trial and observed: “I view with apprehension the attitude of judges who, on a mere question of construction when face to face with claims involving the liberty of the subject, show themselves more executive-minded than the executive... In this country, amid the clash of arms the laws are not silent.”

Justice Khanna, in his dissent, stated: “What is at stake is the rule of law... the question is whether the law speaking through the authority of the court shall be absolutely silenced and rendered mute...”

His dissent does the Indian judiciary and the legal profession proud. The doctrine of basic structure, which is now firmly rooted in our constitutional jurisprudence, is his great gift to posterity. To adapt Winston Churchill’s felicitous phrase, never did so many owe so much to a single judge.

He was enticed into becoming Law Minister in the Charan Singh government supported by Indira Gandhi in July 1979, but he suffered pangs of conscience and resigned in three days. Again, a principled sacrifice and courage to recognise his error publicly.

His portrait adorns Court No. 2 in the Supreme Court. His courage and independence must continue to inspire and remind generations of lawyers and judges of the sacrifice he made in upholding human rights, the rule of law and the independence of the judiciary.

It is essential for each generation to share with successive generations the experiences and struggles of the past for preserving a constitutional democracy and the rule of law. It is an evergreen process and Justice Khanna’s role must encourage each one of us — judge, lawyer and citizen — to play our little part in this never-ending battle.