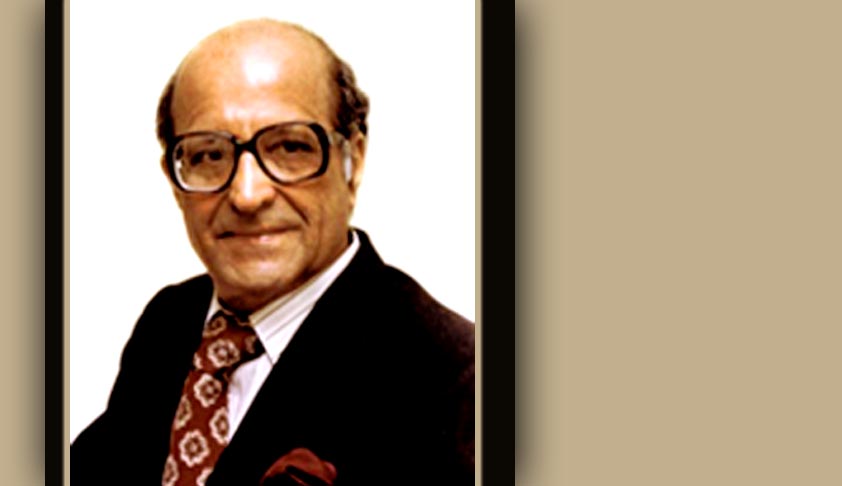 In the words of C Rajagopalachari, “N. A. Palkhivala was God’s Gift to India”. Born to Parsi Parents on January 16th, 1920 in Mumbai, Palkhivala joined the Bar in 1944 in the Chambers of Sir Jamshedji Behramji Kanga. Within ten years he was presenting cases before the Supreme Court. He authored one of his great works ‘The Law and Practice of Income Tax’ with Jamshedji. The book was...

In the words of C Rajagopalachari, “N. A. Palkhivala was God’s Gift to India”. Born to Parsi Parents on January 16th, 1920 in Mumbai, Palkhivala joined the Bar in 1944 in the Chambers of Sir Jamshedji Behramji Kanga. Within ten years he was presenting cases before the Supreme Court. He authored one of his great works ‘The Law and Practice of Income Tax’ with Jamshedji. The book was in print before he turned 30!

The man who propounded the significance of the ‘basic structure doctrine’ and who gave the Indian Legal history Kesavananda case, had rather humble beginnings at the Bar. He even lost his first case of constitutional significance,N Balsaran v State of Bombay, before the Bombay High Court.

24th April, 1973, saw India witnessing the landmark Kesavananda Doctrine wherein the basic structure doctrine was propounded and upheld by a thirteen judge bench, which ruled that any part of the Constitution may be amended by following the procedure prescribed in Article 368, but no part may be so amended as to "alter the basic structure" of the Constitution. This judicial verdict overturned the 11 judge bench decision of the court in I.C Golak Nath case and truly saved the country from the legislative mayhem that was being planned by placing a series of umbrella legislations beyond judicial review. Later, a five judge bench headed by Chief Justice A.N Ray was constituted to scrutinize the extent of application of basic structure doctrine on the legislative amendments. It was perhaps Nani’s compassionate speech that led to the bench being dissolved and the doctrine surviving the test of legislative tactics.

Nani believed in the supreme power of the Constitution. To him, it was a living document that would survive eternally. Championing the cause of fundamental rights and protecting the Constitution’s basic structure, was Nani’s conviction and belief.Seven years later in the case of Minerva Mill’s v U.O.I this doctrine was again successfully upheld.

The Midas of Nani touched every nook and corner of law. In the Privy Purse case he outlined the social dimension that “the survival of our democracy and the unity and integrity of the nation depends upon the realization that constitutional morality is no less essential than constitutional legality. Dharma (righteousness; sense of public duty or virtue) lives in the hearts of public men; when it dies there, no Constitution, no law, no amendment, can save it." He fervently addressed the cause of freedom of speech in the Bennett and Coleman Case.

Nanideclined the seats of Supreme Court and the post of Attorney General. He fought against the government in many instances like the Bank Nationalization Case and the Privy Purse case.He represented India on the international platform in a case against Pakistan in the UN Special Tribunal at Geneva.

He was a man of many pursuits. Besides his razor sharp legal skills, his court craft, his ability to explain things in a simple way, he also believed and practiced the skill to constantly endeavor. His belief was that true genius lay in persevering excellently even in those things that most people would find boring. His mentorship opened a whole new world to the likes of Harish Salve. He believed in the art of fine detail.

Of the countless things that Nani would be remembered for, his budget speeches can never be forgotten. His explanation of complex details in a simple manner garnished with astonishing trivia, made his speeches so popular that in those times, it seemed as if there were two budget speeches that were to be delivered. One by the Finance Minister, and the other by Nani.

In an era where the nation is faced with dilemma over several important questions which revisit our established understanding of principles like separation of powers, appointments in the judiciary, freedom of the press in the light of latest technological advancements or even the debate around sexual orientation under section 377, a man like Nani is needed to answer the questions surrounding these critical issues with simple deep rooted solutions.