Removal of Justice Ganguly on the ground of 'Proved mis-behaviour' 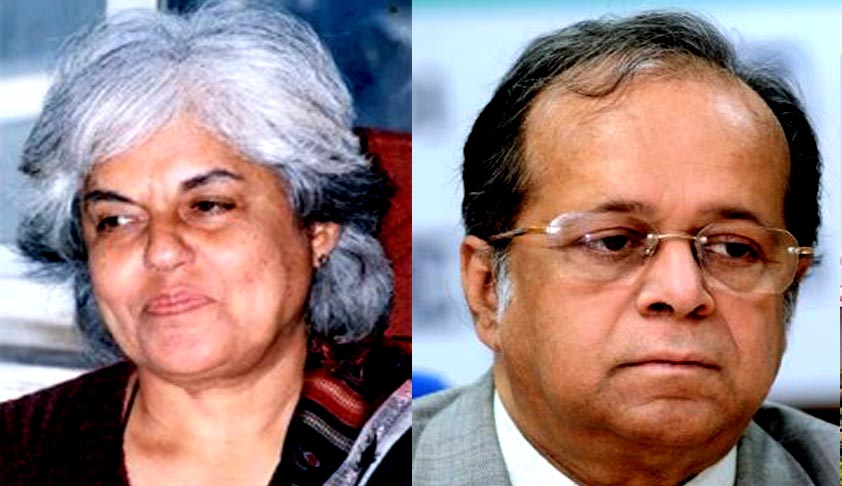 Additional Solicitor General Indira Jaisingh wrote to the Prime Minister of India for initiating action under Section 23 of the Human Right Act, 1993 for removal of Justice A K Ganguly from the post of chairman of WBHRC on the ground of “proved misbehaviour” who according to the Supreme Court panel had committed "unwelcome sexual advances towards a law intern"."I have written a letter to...

Additional Solicitor General Indira Jaisingh wrote to the Prime Minister of India for initiating action under Section 23 of the Human Right Act, 1993 for removal of Justice A K Ganguly from the post of chairman of WBHRC on the ground of “proved misbehaviour” who according to the Supreme Court panel had committed "unwelcome sexual advances towards a law intern".

"I have written a letter to the Prime Minister for initiating action for removal of Justice A K Ganguly as the chairman of WBHRC. It is for the Prime Minister and the Cabinet to decide and ask the President to make a reference to the Supreme Court for his removal. We will be sending a much-required signal to the country at large, that the rights of women matter and will be respected. It will also send a signal that 'be you ever so high, the law is above law' and most importantly, it will send a signal that those who are charged with the constitutional duty to enforce the law, must first live by the law themselves," she told PTI.

Here are some excerpts from the letter:

"Sir, as is evident from the finding of the three judges committee there is a prima facie case of an act of unwelcome behaviour (unwelcome verbal/non verbal conduct of sexual nature) by Mr Justice (retd) AK Ganguly."

"As the Additional Solicitor General of India, it is my duty to defend Constitutional values, one of the most fundamental of them being the right to non-discrimination based on sex. India has made commitments to international bodies to protect the rights of women and have signed treaties such as CEDAW (Convention on the Elimination of Discrimination against Women) to advance the rights of woman. It is now time for us to redeem those promises, she said. "You would agree that sexual harassment is gross form of violation of human rights. A person against whom there is an allegation of sexual harassment cannot be allowed to occupy the position of Chairman of a Human Rights Commission without his name being honorably cleared. The office of chairman is an office of trust and is held only so long as the conduct is beyond reproach," the ASG said in the letter. She referred to Section 23 of the Protection of Human Rights Act, 1993, which deals with the resignation and removal of the Chairperson or a member of the state commission. "In view of the above mentioned provision of law, as well as the finding of the three judges committee, I believe it is my bounden duty to bring to your urgent notice that it will neither be in interest of the justice, nor in the interest of the Human Rights Commission, to leave the issue undecided. "Hence, due process of law must be initiated by a reference to the Supreme Court of India so that we have a definite finding on whether misconduct has been committed by Justice (retd) A K Ganguly,"

"Thus, I request your good self to take necessary action requesting the President of India, to make a reference to the Supreme Court of India, under Section 23 (1A) to initiate the process of removal of Justice (retd) A K Ganguly from the post of Chairperson, WBHRC. This is the only way to set 'due process of law' in motion,"

As it is clear from the above quoted provision, the Chairperson or, any other Member of the State Commission shall only be removed from his office by order of the President on the ground of proved misbehaviour or incapacity after the Supreme Court, on a reference being made to it by the President, has, on inquiry held in accordance with the procedure prescribed in that behalf by the Supreme Court, reported that the Chairperson or such other Member, as the case may be sought on any such ground to be removed.

The only ground (at the moment) on which the resignation of Justice Ganguly can be sought is “proved misbehaviour”. Only after a fact finding inquiry it can be said with certainty whether the alleged acts committed by the Chairman amount to "misbehaviour". Unless a reference is made by the President to the Supreme Court, it cannot suo motu hold an inquiry into the alleged misbehavior of the members/Chairman of HRC. Hence, the inquiry conducted by the 3-member panel which found Justice Ganguly committed "unwelcome sexual advances towards a law intern" cannot be considered as an inquiry contemplated U/S 23 of the Human Right Act.

Neither the Constitution nor the Human Right Act define the term 'misbehaviour'. In Krishna Swami vs Union of India and Another it was held: “Several International forums for judicial independence suggested to define misbehaviour but to no avail. No legislature in any democratic country attempted to do so as it would appear to be difficult to give a comprehensive definition to meet myriad situations”. The “Black's Law Dictionary (6th Edition, p. 998), defines 'misbehaviour' as "ill conduct, improper or unlawful behaviour." 'Misconduct' is defined at p. 999 as "A transgression of some established and definite rule of action, a forbidden act, a dereliction from duty, unlawful behaviour, wilful in character, improper or wrong behaviour; its synonyms are misdemeanour, misdeed, misbehaviour, delinquency, impropriety, mismanagement, of-fence, but not negligence or carelessness”.

Whether “misbehaviour” would extend to conduct of a Judge in or beyond the execution of judicial office?

In Krishnaswamy Case the Supreme Court answered the above question as follows;- Misbehaviour would extend to conduct of the Judge in or beyond the execution of judicial office. Even administrative actions or omissions too need accompaniment of mens rea. The holder of the office of the judge of the Supreme Court or the High Court should, therefore, be above the conduct of ordinary mortals in the society. The standards of judicial behaviour both on and off the Bench are normally high. The falling moral or ethical standards in the society are no ruse nor refuse to slacken the higher standards of judicial conduct. The society, therefore, is entitled to expect higher degree of propriety and probity in the judicial conduct from higher judiciary. There cannot be any fixed or set principles, but an unwritten code of conduct of well established traditions are the guidelines for judicial conduct. The conduct that tends to undermine the public confidence in the character, integrity and impartiality of the judge must be eschewed. It is expected of him to voluntarily setting forth wholesome standards of conduct reaffirming fitness to higher responsibilities. Even the private life of a judge must adhere to standards of probity and propriety, acceptable to others.They alone would receive confidence and respect from the public”.

Ironically, a PIL has been filed in the Supreme Court by Common Cause seeking the removal Justice K G Balakrishnan  as Chairperson of the National Human Rights Commission on the ground of “proved misbehaviour”.It challenged the Government’s stand, and to seek removal of Justice Balakrishnan by making a reference to Supreme Court for holding an inquiry. In that case the Central Government took the stand that no reference could be made to the apex court according to Section 5 (2) of the Protection of Human Rights Act, as the acts of ‘proved misbehaviour’ could not be construed to include within its ambit allegations pertaining to a person’s conduct in the previous office. The Government's objection is in direct conflict with the Krishnaswamy Judgment. But in this case, even that defence cannot be taken since the alleged occurrence happened during the tenure of Justice Ganguly as the Chairman of Human Right Commission.

M.A.Rashid is the Co-Founder and Director of LIVE LAW. He is also an Author and Editorial Consultant with LexisNexis.