Reservation for Other Backward Classes - Affirmative Action or Politics at Work 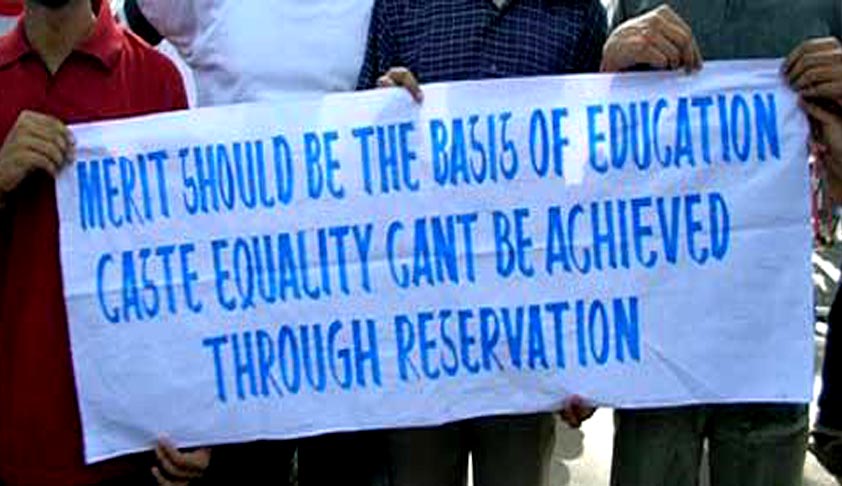 In the cacophony surrounding the term ‘reservation’, any attempt at a rational debate on the subject is a risky venture. The inclusion of Jats and Marathas in the category of “other backward classes” and statements of the new dispensation on minorities have added to the conundrum. Presently, the inclusion of Marathas stands stayed by the Bombay High Court.To unravel the...

In the cacophony surrounding the term ‘reservation’, any attempt at a rational debate on the subject is a risky venture. The inclusion of Jats and Marathas in the category of “other backward classes” and statements of the new dispensation on minorities have added to the conundrum. Presently, the inclusion of Marathas stands stayed by the Bombay High Court.

Caste based reservation also excludes religions which do not recognize caste from the zone of consideration, making the exercise inherently discriminatory. To get over this self created problem, efforts are then made to give reservation to these excluded groups on the basis of religion. Reservation on the basis of religion being constitutionally prohibited naturally attracts judicial sanction. Had the backward classes been identified on caste neutral criteria in the first place, no section of the society would have stood excluded from affirmative action. Thus we are confronted with a classic  case of compounding the problem by application of a wrong remedy.

The India of the 21st Century demands a set of criteria which genuinely demarcates the haves from the have-nots in society, irrespective of caste or religion. However, the moment the discourse veers towards economic reservation, out comes the spectre of the Supreme Court judgement in the Mandal Commission case. The argument put forward to defeat this demand is that the Supreme Court has held reservation on economic basis to be unconstitutional in the Mandal case. It is correct that the Supreme Court in the Mandal Commission forbids reservation solely on economic criteria, the operative word being ‘solely’. But what is overlooked, deliberately or otherwise, is that the very next paragraph of the same judgement specifically permits reservation on the basis of occupation-cum-income without reference to caste. While upholding the classification of backwardness on the basis of caste in the Mandal Case, the Supreme Court went on to expressly state that “…we said that identification of backward classes can be done with reference to castes along with other occupational groups, communities and classes. We did not say that that is the only permissible method. Indeed, there may be some groups or classes in whose case caste may not be relevant to all. For example, agricultural labourers, rickshaw-pullers/drivers, street-hawkers etc. may well qualify for being designated as Backward Classes.” This position in law is not new. As far back as 1964 in the Chitralekha judgement case, the Supreme Court upheld the income cum occupation criteria adopted by the State of Mysore for reservation of seats for backward classes in professional and technical colleges. The court clarified that “While this Court has not excluded caste from ascertaining the backwardness of a class of citizens, it has not made it one of the compelling circumstances affording a basis for the ascertainment of backwardness of a class. To put it differently, the authority concerned may take caste into consideration in ascertaining the backwardness of a group of persons; but, if it does not, its order will not be bad on that account, if it can ascertain the backwardness of a group of persons on the basis of other relevant criteria.” It was this judgement of 1964 which was reaffirmed by the Supreme Court in the Mandal Case in 1992.

If this is the stated position of a Nine Judges Bench of the Supreme Court, what has stopped the State from evolving caste neutral criteria for reservation? Why is a malady that was sought to be eradicated by the founders of the Indian nation now being treated as a panacea for all evils by their successors, a notable exception being the Late Prime Minister Mr. Rajiv Gandhi. In one of his most impassioned speeches in the Parliament Mr. Gandhi repeatedly requested the then Prime Minister Mr. V.P. Singh not to divide the country on the basis of caste when the national goal was that of a casteless society.

Caste is inherently pernicious in any civilized society and the history of reservation in India is replete with instances of compounding of the problem by the application of wrong remedy. To illustrate, by applying caste as a criterion, the under-privileged from the so-called “forward castes” stand completely excluded. This was definitely not the intention of the Constitution-makers as the debates in the constituent assembly show that while discussing backward classes, the Brahmins who worked as cooks were very clearly in their minds as persons belonging to this category.

The problem does not end here. The Supreme Court while examining the issue of reservation in higher education in the Ashoka Kumar Thakur case observed that there was no data to identify backwardness on the basis of caste as the last caste census in India was held in 1931. Rather than correcting its course, the state in its intransigence has bravely gone ahead and introduced caste census in Independent India. So much for a casteless society! The national goal of casteless society remains a distant dream owing to the relentless effort of the state to incentivize caste identity.

The reluctance of the new regime to grant reservation on communal basis is a welcome step but to become a meaningful exercise it must be accompanied by introduction of caste neutral criteria for affirmative action. Affirmative action which represents every section of society irrespective of caste or religion would truly reflect the inclusive identity of India that we all dream of.

Aparajita Singh is an Advocate at Supreme Court of India.