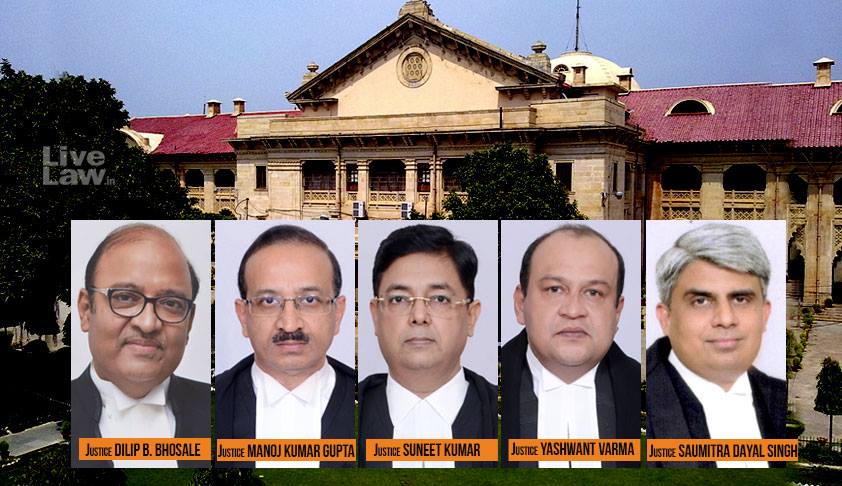 A Full Bench of five judges of Allahabad High Court has turned down the reference which doubted the correctness of the Division Bench decision in Dr. Vishwajeet Singh and ors. Vs. State of U.P. and ors, which had held that no reservation in post of Lecturer as per  UP Higher Eduction Service Commission Act, 1980 need be provided if the number of posts in the cadre is less than three.It...

A Full Bench of five judges of Allahabad High Court has turned down the reference which doubted the correctness of the Division Bench decision in Dr. Vishwajeet Singh and ors. Vs. State of U.P. and ors, which had held that no reservation in post of Lecturer as per  UP Higher Eduction Service Commission Act, 1980 need be provided if the number of posts in the cadre is less than three.

It was also held in Dr.Vishwajeet Singh that  held that the reservation and roster for lecturer post had to be applied subject wise treating the college to be a 'unit'. It further observed that in a cadre with a minimum of five posts, one post is to be reserved for Scheduled Castes and one post for the Other Backward Classes category subject to the roster point being meticulously followed.

The decision in Dr.Vishwajeet Singh(supra) was however not followed by another Division Bench in Mahendra Kumar Gond Vs. District Inspector of Schools, Azamgarh, which held that the entire cadre has to be reckoned for applying reservation, instead of applying it subject wise by treating college to be a unit. This inconsistency was noted by a Single Judge, who made a reference to the Full Bench of three judges for resolution. The Full Bench in Heera Lal vs State Of U.P. & Others, approved the view expressed in Dr.Vishwajeet Singh(supra).

However, another Division Bench in  Dr. Archana Misra and others Vs. State of U.P found itself unable to concur with the view in Dr.Vishwajeet Singh as upheld by Full Bench in Heera Lal. So, a reference was made to the Full Bench of five judges.

The Full Bench comprising Chief Justice Dilip Bhosale, Justice M K Gupta, Justice Suneet Kumar, Justice Yashwant Varma and Justice S D Singh noticed that the decision in Dr.Vishwajeet was challenged in Supreme Court in Civil Appeal. As per order dated January 19, 2017, the Supreme Court dismissed the challenge, by stating "We are in agreement with the view taken in the impugned judgment. The judgment of the High Court is accordingly affirmed". No detailed reasons were given by the Supreme Court except this".

Therefore, the sole issue before the Full Bench was whether the decision of High Court in Dr.Vishwajeet merged with the Supreme Court decision.

In this regard, the Full Bench was guided by the law laid down in  Kunhayammed and others vs. State of Kerela and another, which held : "Once a special leave petition has been granted, the doors for the exercise of appellate jurisdiction of this Court have been let open. The order impugned before the Supreme Court becomes an order appealed against. Any order passed thereafter would be an appellate order and would attract the applicability of doctrine of merger. It would not make a difference whether the order is one of reversal or of modification or of dismissal affirming the order appealed against. It would also not make any difference if the order is a speaking or non­-speaking one".

Similarly in S. Shanmugavel Nadar Vs. State of Tamil Nadu the Supreme Court held that in certain situations thereasons for a decision can also be said to have merged in the order of the superior court if the superior court has, while formulating its own judgment or order, either adopted or reiterated the reasoning, “or recorded an express approval of the reasoning, incorporated in the judgment or order of the subordinate forum”.

The judgment authored by the Chief Justice Dilip Bhosale observed :

"The Supreme Court, while dismissing the appeal has clearly observed that it is in agreement with the view taken in Dr. Vishwajeet Singh and, accordingly, affirmed the same. There is thus a positive and unambiguous expression of approval of the said decision and, therefore it cannot be said that the order of the High Court did not merge into the order of the Supreme Court.

Once the decision in Dr. Vishwajeet Singh stood specifically approved/affirmed by the Supreme Court and consequently merged in the said order, the question of doubting its correctness or dissenting from the same would not arise. Once, as we have found, the decision of the Division Bench stood subsumed in the order of the Supreme Court after grant of leave with a positive affirmation of the view taken therein, it is no longer open for this Court to revisit the said decision".

Therefore, the reference was turned down, expressing approval of Dr.Vishawjeet Singh case.