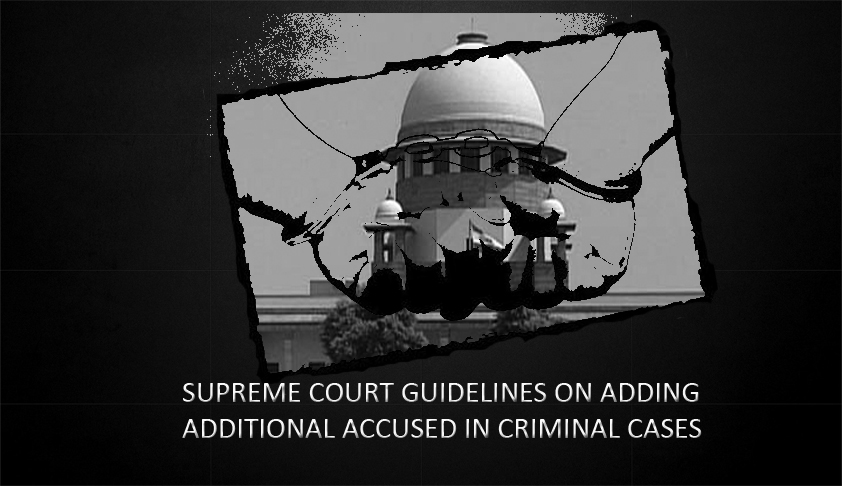 The Constitution Bench of the Supreme Court finally delivered the Judgment in a batch of appeals resolving the conflict between many two and three Judge Benches of the supreme court and various High Courts regarding the scope and ambit of powers of the Criminal Court regarding adding additional accused in a Criminal case Courts interpreting Section 319 of Code of Criminal Procedure,...

The Constitution Bench of the Supreme Court finally delivered the Judgment in a batch of appeals resolving the conflict between many two and three Judge Benches of the supreme court and various High Courts regarding the scope and ambit of powers of the Criminal Court regarding adding additional accused in a Criminal case Courts interpreting Section 319 of Code of Criminal Procedure, 1973.

The initial reference was made by a two-Judge Bench  of the Supreme Court vide order dated 7.11.2008 in the leading case of Hardeep Singh (Crl. Appeal No. 1750 of 2008) where noticing the conflict between the judgments in the case of Rakesh v. State of Haryana, AIR 2001 SC 2521; and a two-Judge Bench decision in the case of Mohd. Shafi v. Mohd. Rafiq & Anr., AIR 2007 SC 1899, a doubt was expressed about the correctness of the view in the case of Mohd. Shafi (Supra). The questions referred were;

(1) When the power under sub-section (1) of Section 319 of the Code of addition of accused can be exercised by a Court? Whether application under Section 319 is not maintainable unless the cross-examination of the witness is complete?

(2) What is the test and what are the guidelines of exercising power under sub-section (1) of Section 319 of the Code? Whether such power can be exercised only if the Court is satisfied that the accused summoned in all likelihood would be convicted?

After considering various interpretations given by various benches for Section 319 of Code of Criminal Procedure Justice B.S.Chouhan, who wrote the Judgment summed up the issues and answers as follows;

Q.1 What is the stage at which power under Section 319  Cr.P.C. can be exercised?

A. In Dharam Pal's case, the Constitution Bench has already held that after committal, cognizance of an offence can be taken against a person not named as an accused but against whom materials are available from the papers filed by the police after completion of investigation.  Such cognizance can be taken under section 319 Cr.P.C and the Sessions Judge need not wait till 'evidence' under Section 319 Cr.P.C. becomes available for summoning an additional accused.

Section 319 Cr.P.C., significantly, uses two expressions that have  to  be  taken  note  of  i.e.  (1)  Inquiry (2) Trial.  As a  trial commences after  framing of charge, an inquiry can only be understood to be a pre-trial inquiry. Inquiries under Sections 200, 201, 202 Cr.P.C.; and under Section 398 Cr.P.C. are species of the inquiry contemplated by Section 319 Cr.P.C. Materials coming before the Court in course of such enquiries can be used for corroboration of the evidence recorded in the court after the trial commences, for the exercise of  power  under Section  319 Cr.P.C.,  and also  to add an accused whose name has been shown in Column 2 of the chargesheet.

In view of the above position the word 'evidence' in Section 319 Cr.P.C. has to be broadly understood and not literally i.e. as evidence brought during a trial.

Q.II Whether the word "evidence" used in Section 319(1) Cr.P.C. could only mean evidence tested by cross-examination or the court can exercise the power under the said provision even on the basis of the statement made in the examination-in-chief of the witness concerned?

A. Considering the fact that under Section 319 Cr.P.C.  a  person against whom material is disclosed is only summoned to face the trial and in such an event under Section 319(4) Cr.P.C. the proceeding against such person is to commence from the stage of taking of cognizance, the Court need not wait for the evidence against the accused proposed to be summoned to be tested by cross-examination.

A. A person not named in the FIR or a person though named in the FIR but has not been chargesheeted or a person who has been discharged can be summoned under Section 319 Cr.P.C. provided from the evidence it appears that such person can be tried along with the accused already facing trial. However, in so far as an accused who has been discharged is concerned the requirement of Sections 300 and 398 Cr.P.C. has to be complied with before he can be summoned afresh.