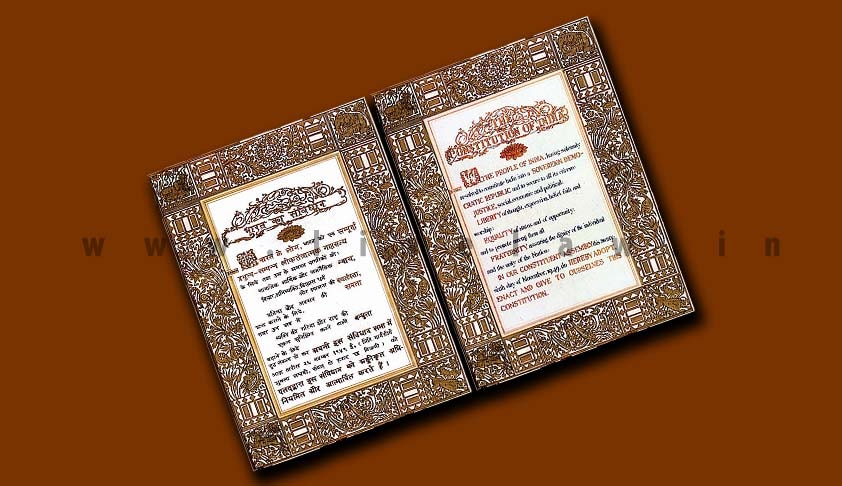 It is an irony that much debate was required for the Government to say that the Constitution is our holy book. The treacherous remarks on secularism and socialism by the Home Minister created initial obfuscation that had to be erased by the Prime Minister’s assurance to stick on to the constitutional values. The Government ultimately acknowledged the distinction between conventional...

It is an irony that much debate was required for the Government to say that the Constitution is our holy book. The treacherous remarks on secularism and socialism by the Home Minister created initial obfuscation that had to be erased by the Prime Minister’s assurance to stick on to the constitutional values. The Government ultimately acknowledged the distinction between conventional democracy and constitutional democracy, thereby hinting that the latter is not merely a device for majoritarian regime.

During the eve of this year’s republic day, it was the Union Minister Ravi Shankar Prasad who ignited a controversy by saying that the Preamble in its original form, without the words ‘Socialism’ and ‘Secularism’ was one endorsed by Pandit Nehru. A ‘national debate’ on the topic was called for. The controversy however ended with an assurance by Minister Venkaiah Naidu who then promised retention of the Preamble in its present form. The recent episode in the parliament was almost a replica of the drama.

It is embarrassing that those in power, who have sworn to their office under Articles 99 and 75(4) of Constitution read with the 3rd schedule, by showing ‘true faith and allegiance’ to the Constitution show the effrontery to indicate otherwise quite often, and thereafter showing the ‘generosity’ to maintain such values. This does not indicate a healthy practice in governance.

The fascination for the original Preamble does not seem to be a feeling expressed in the best interest of the nation. A textual revisit to the constituent assembly debates and an empirical evaluation of the country’s journey after independence would support this postulate.

Chief Justice Marshall visualised the Constitution as a socio political document “framed for ages to come” and “designed to approach immortality as near as human institutions can approach”. In the Indian context, Justice R.C. Lahoti described the Preamble as the “quintessence of the Constitution”. The constituent assembly extensively debated on each and every word in the preface to the fundamental law. Dr.Ambedkar, apprehensive of future contradictions between constitutional dreams and social realities, however, advocated for institutional reforms. An optimist Nehru who pleaded for fundamental rights, Sardar Patel who was skeptic about them, Rajagopalachari, whose inclination was more towards a Gandhian Swaraj, and K.M.Munshi who was eloquent on individual liberty were all dynamic in the debates, which in all respects were ‘national’.

The Preamble was amended in 1976. The amendment came into force on 3.1.1977. The 42nd amendment was preceded by debates within and outside the Parliament.

The proponents of ‘original Preamble’ have however, put forward the following postulates:-

The third postulate is vulnerable to historical scrutiny.  While moving the motion for amendment, the then Minister of Law H.R.Gokhale, opened the discussion by referring to Pandit Nehru’s speech on 22.1.1947:–

“The first task of this assembly is to free India through a new Constitution, to feed the starving people, to clothe the naked masses and to give every Indian the fullest opportunity to develop himself according to his capacity” (Loksabha debates vol.65 P.75).

Gokhale then indicated that the Preamble “being the key to the whole Constitution” should more accurately and correctly reflect the ‘objectives’ of socialism and secularism. (Ibid).

Therefore it is erroneous to delink Nehruvian concept of socialism and secularism from the ‘politics of amendment’. The conflict was rather between the Nehruvian approach on the one hand and the leftist perception on the other. During the discussions, the veteran communist leader Indrajit Gupta reacted by saying that mere inclusion of the words would not alter the socio-economic structure of the country. Gupta even referred to National Socialist Party in Germany led by Adolf Hitler to argue that there is nothing so significant in the description. He pleaded for strengthening the directive principles with a socialist edge, rather than making ‘cosmetic’ changes in the Preamble.

The other postulates also are equally fragile. Even the constituent Assembly debates show a conceptually flawed move to assimilate socialist traits in the Preamble. Maulana Hasrat Mohani who pleaded for incorporating federalism in Preamble, also wanted  to name the country as Union of India Socialist Republics” (UISR) resembling USSR. This was unacceptable to the majority, for the very political structure of USSR was dissimilar to the Indian Constitutional policy. However, the fact remains that the proposals and deliberations as occurred in 1976 were absent during the making of the Constitution. Nor there was a historical context as it occurred in 1976 to call for an amendment. Therefore, such comparisons would be out of place.

The finest part of the 42nd amendment is that it motivated the Supreme Court not only to endorse the amendment but even to evolve a socialist jurisprudence. A ‘Krishna Iyer School’ in the Supreme Court found its ideological legitimacy in the amended Preamble.  In Excel Wear (1978) the Supreme Court relied on the socialist component of the Preamble to endorse nationalisation process and State’s monopoly over resources. In Radhir Singh (1982) the doctrine of ‘equal pay for equal work’ was expounded on the same premises. In Nakara (1982) the Supreme Court could strike down the disparity in emoluments paid to the pensioners for it arbitrarily negated the socialist goal of the constitution. Socialist approach, according to the court, should involve a strategy for decent standard of life. The Supreme Court even explained the concept of socialism as a “blend of Marxism and Gandhism”  which could be proximate to Gandhian Socialism. The decision in  Dharwad Employees (1990) asserted the right for pay parity for casual workers and that in Samatha (1997) with a striking title took a formidable posture against inequalities, in the context of tribal rights.

An aversion to the amendment expressed by a few elected leaders therefore clearly indicates their ideological plank which again should be subjected to public scrutiny.  While projecting the original Preamble, they practically ignore  the authoritative pronouncements of the Supreme Court on the socialist characteristics of the constitutional text.

But the present objection to the amendment is no longer technical; it is ideological. Curiously, in any sensible national debate on the issue, the Bharatiya Janata Party(BJP) and its allies would run the risk of exposure. To put it otherwise, the very raison d’etre for amendment and its retention would be the Sangh Parivar’s political antecedents.

It is the politics and history of the BJP and the Hindutwa outfits read in the light of the apex court’s judgment in Bommai (1994) that legitimises the 42nd amendment. The President’s power under Article 356 of the Constitution for dismissing state governments and dissolving state legislatures was the matter in issue in Bommai.  The court held that secularism, like federalism, is a basic feature of the constitution. In states like Madhya Pradesh, Himachal Pradesh and Rajasthan, the reports by the respective Governors sufficiently indicated that state governments and even the ministers were in hand in glove with the karsevaks and other communal forces. The executive abetment of communal activities led to a real break down in governance in the states.  The Supreme Court noted that the Government of Rajasthan played an obvious role in the Ayodhya incident. The Governor of Himachal Pradesh reported that the then Chief Minister of the State himself was a member of RSS who played a hyperactive role in the masjid demolition drive.

It was in Bommai that the Supreme Court inter alia examined the secularist Preamble along with the other parts of the Constitution including Articles 25 to 30, which deal with religious freedom. The Court held:-

Under the Constitution no party or organization can simultaneously be a political and religious party. It has to be either. Same would be the position, if a party organization acts and/or behaves by word  of mouth, print or in any other manner to bring about the said effect, it would equally be guilty of an act of unconstitutionality. It would have no right to function as a political party. The fact that a party may be entitled to go to people seeking a mandate for a drastic amendment of the Constitution or its replacement by another Constitution is wholly irrelevant in the context. We do not know how the Constitution can be amended so as to remove secularism from the basic structure of the Constitution. Nor do we know how the present constitution can be replaced by another; it is enough for us to know that the Constitution does not provide for such a course - that it does not provide for its own demise. (All India Reporter, 1994. Para 243).

This long passage from Bommai would also signify the importance of amendment. The plea  that India would be secular even without that word in the Preamble is historically incorrect and even deceptive. The truth is that even with the word, the communal outfits could sabotage the constitutional scheme which ultimately led to interference by the court and protest from the electorate. Bommai contains a final declaration of law on the subject. It is no longer a legal text. On the other hand, it is the country’s experience. And as Justice Holmes put it, life of the law is not logic; it is experience.

The centre should recall that the phrase “Unity of the nation” in the original Preamble also was modified in 1976 by expanding it as “unity and integrity of the nation”. The word secularism has a linkage with the integrity of the nation as explained by the Supreme Court in Bommai. The Court said that “Religious tolerance and fraternity are basic features and postulates of the Constitution as a scheme for national integration and sectional or religious unity”. The Court further cautioned that “programmes or principles evolved by political parties based on religion amounts to recognising religion as a part of the political governance which the Constitution expressly prohibited” ( Bommai-  para 187) .

Thus, the affinity for ‘original Preamble’ expressed too often would only convey unpleasant messages in the age of intolerance. No doubt, there is substance in saying that Mrs. Gandhi and the Congress had motives in introducing the words in the Preamble for they badly needed a cosmetic therapy to put their image in good shade. But the political motive behind the present demand to do away with the amendment is all the more perilous.

Kaleeswaram Raj is a lawyer practising in the Supreme Court of India and the High Court of Kerala. He is the author of The Spirit of Law (2012). Email: [email protected]