Review of Justice Bhat’s book on Relevancy, Proof and Evaluation of Evidence in Criminal Cases 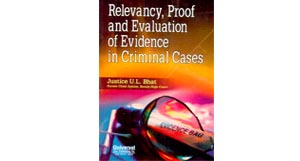 I have had the privilege of browsing through the book titled “Relevancy, Proof and Evaluation of Evidence in Criminal Cases” authored by Mr. Justice U.L.Bhat, Former Chief Justice of Guwahati and Madhya Pradesh High Courts and published by Universal Law Publishing Company.

We are all familiar with treatises, commentaries and text-books on Indian Evidence Act, all running into volumes. But here is an authoritative analysis of the very same subject, compact in size and in a language comprehensible to Judges, legal practitioners, researchers and students of law. The author, known to the judicial circles, for his analytical approach while grappling with a question of fact or law or while confronted with a problem, has befittingly brought out this book.

Many would not have observed that the entire Evidence Act is divided into three parts- Part I dealing with “Relevancy of facts”, Part II dealing with “Proof” and Part III dealing with “Production and effect of evidence”. It is this law in cold print which has been made in an assimilable form by Justice Bhat who, as a Judge, had mastered the areas of applied law in criminal trial. If this book becomes a “best-seller” it is not because of the publisher’s label or the colour scheme of the cover page but solely because of the utility of the book. As for the publisher, I have a comment to make. After giving the biographical sketch of Justice Bhat on the inner back page wherein it is mentioned that Justice Bhat served as acting Chief Justice of the High Court of Kerala, it was not proper to have described him as “Former Chief Justice of Kerala”. I am sure that Justice Bhat, knowing him as I do, would have definitely taken exception to that qualification. Of course, this does not mean that Justice Bhat was an insignificant speck in the Indian Judiciary. He was a Judge par excellence and known for his sharp intellect and profound knowledge of law, men and matters. To the members of the larger fraternity of law including the judiciary of the country, Justice Bhat was more than a High Court Chief Justice.

This is a wonderful treatment of the subject painstakingly conceived and presented to the law reading public both in India and abroad. I, for one, would have preferred chapters 17 to 19 of the book to be at the beginning of the book. I am sure that this book which will serve as a ready reckoner to everyone who is concerned with criminal law will be treasured in every personal and public law library.

Justice V Ramkumar is a retired Judge of the Kerala High Court.