RGNUL Holds Panel Discussion on ‘India’s National Security: How Well Are We Prepared?’ 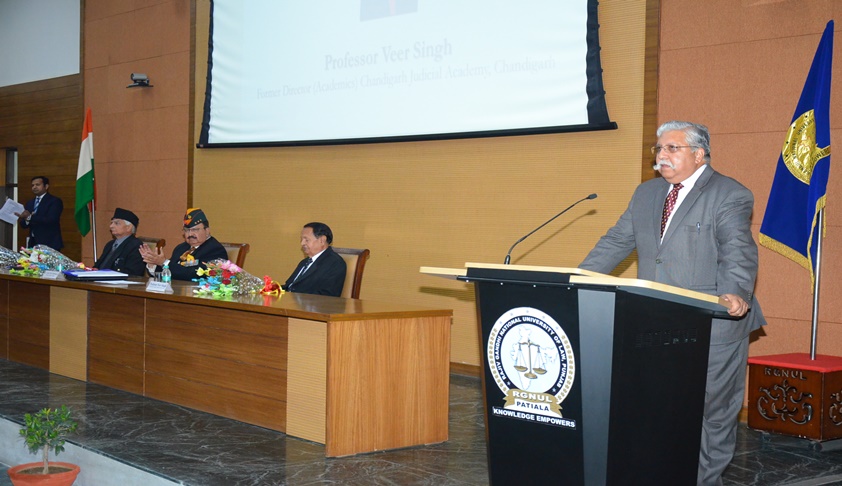 The dignitaries were welcomed by Prof Paramjit S Jaswal, Vice-Chancellor, RGNUL. In his welcome address, he eulogized the efforts extended by Think India Team at RGNUL. Prof Jaswal also apprised the delegates and students that RGNUL would be the first ever National Law University to have NCC training on campus.

Shveta Dhaliwal, convener of the panel discussion, presented her speech on the concept of ‘Security And The Challenges Involved’.

Lt Gen BS Jaswal delved into the issues related to ‘J&K Imbroglio and the Way Forward’. He focused on the historical reasons behind the J&K quagmire. He highlighted upon the intrinsic and extrinsic factors responsible for the instability. He discussed the issues of radicalization and external interferences. He elaborated upon the role of media in presenting the real situation in the valley. He expressed his concern over ‘agitational terrorism’ in the present times. He eulogised the role of Armed Forces in carrying out Operation Sadbhavna in the Valley. He asserted that India was capable of protecting herself through the empowerment of youth with education. He remarked: “Students and youth are the future of India”. He also talked about the problem of separatists and the measures to deal with it. He emphasized on strengthening the art of democracy. He asserted that a change in the psychology of the Indians could largely help in eliminating the internal infirmities.

VK Kapoor discussed the ‘Changing Profile of Terrorism’. He elaborated upon the tactics adopted by terrorists to influence people to joining terror groups. Economic recession, unemployment and misuse of internet are responsible for influencing the young impressionable minds. He expressed his concern over the ethnic and nationalist separatist group posing threat to the national security. Human bombs, kidnapping, hijacking, weapons of mass destruction; narco-terrorism, cyber terrorism and chemical-biological terrorism are the new faces of terrorism in the contemporary time. He suggested that the intelligence must be upgraded to counter the new modes of terrorism. He also said strategic counter, tactical counter and intelligence counter is the way by which terrorism can be countered.

Prof Veer Singh deliberated upon ‘India’s Security Concerns in the Indo-Pacific Region’. He strongly criticized the lack of sense of history in matters and issues related to national security. He dwelled on the historic humiliation faced by the country due to her unpreparedness. He observed that one needs to learn lessons from the history to strengthen the present and the future of the nation. He contemplated upon the pre and post-independence security concerns of the nation. He discussed the lack of indigenisation of defence equipment in our Armed Forces and further elucidated upon its implications. He also emphasised upon the need for protective and proactive foreign policy, and the importance of evolving the defence mechanism in an adequate way to counter the nuclear threats of the time.

Prof GIS Sandhu, Registrar RGNUL, proposed a vote of thanks on the occasion. He observed that the deliberations were fruitful in providing a way forward to the impending dangers.