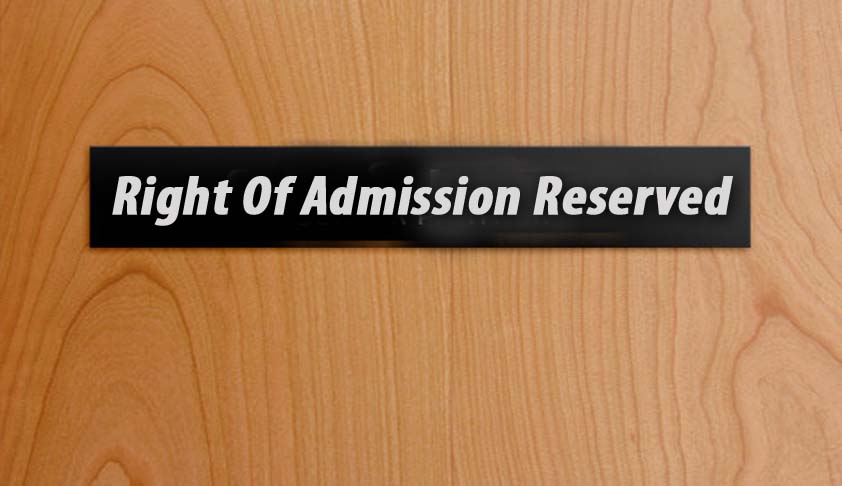 Social media has been abuzz with posts and tweets slamming a restaurant in Kolkatta which allegedly denied entry to a driver for xyz reasons. Previously too, one has heard of similar incidents - a lady was refused entry in a Five Star Hotel in Mumbai because she was wearing chappals, in July 2014 a sitting Judge of the Madras High Court, a senior advocate practising in the same court and a...

Social media has been abuzz with posts and tweets slamming a restaurant in Kolkatta which allegedly denied entry to a driver for xyz reasons. Previously too, one has heard of similar incidents - a lady was refused entry in a Five Star Hotel in Mumbai because she was wearing chappals, in July 2014 a sitting Judge of the Madras High Court, a senior advocate practising in the same court and a lawyer from Madurai were denied entry into the Tamil Nadu Cricket Association (TNCA) Club for having come in ‘dhoti’. Shashi Tharoor, in his book ‘India Shastra’, mentions that “…the same thing has happened to me, and in the same city. I was denied entry to my own sister’s wedding reception at the Madras Gymkhana in 1982 because I was wearing an expensive silk kurta which, of course, didn’t have a collar…”. There are several other incidents reported in the media. Is refusing to grant entry or serve a guest because of what he/she is wearing or his/her appearance legal and justified ?

Hotels, restaurants and clubs have their own rules, written as well as unwritten, with the most popular one being ‘Right of Admission Reserved’.   In several countries establishments have adopted a ‘Right to Refuse Service’. Benefit of such a vague and ill-defined and in-house rule is taken by the food and entertainment sector, the hospitality sector and recently by the medical sector too. Some prescribe a particular dress code, which is in writing, while others simply go by the appearance of a person seeking entry and their own ipsi dixit.

Hotels, restaurants and clubs are private enterprises and are well within their rights to formulate their regulations. It is argued by them that they are catering to a particular section or class of society and as such entry of someone not falling within that bracket may cause inconvenience or discomfort to the other guests. Guests causing trouble or disturbance may be asked to leave. Minors may be denied entry to a bar. Guests with an infant may not be permitted to enter a nightclub with loud music blaring. Someone with a visible skin infection may not be allowed entry into a water park. The situations are innumerable and many a times the management takes an on-the-spot decision.

I have not come across any law in India which prohibits hotels, restaurants and clubs from devising their own rules for entry, as much discriminatory they may be, apart from Article 15 in the Constitution of India. The said Article pertains to ‘Prohibition of discrimination on grounds of religion, race, caste, sex or place of birth’ and Clause 2 thereof states :

“(2) No citizen shall, on grounds only of religion, race, caste, sex, place of birth or any of them, be subject to any disability, liability, restriction or condition with regard to -

(a)     access to shops, public restaurants, hotels and places of public entertainment;”

So if a hotel, restaurant or a club refuses to allow someone to enter because of his/her attire, that per se doesn’t offend Article 15 of the Constitution, howsoever cringing it may be, and offensive morally and socially.

There may be occasions when a hotel, restaurant or a club denies entry but such decisions should not be accentuated by arbitrariness or based upon an individuals’ appearance. Refusing to serve someone should be reasonable and legitimate. Hotels, restaurants and clubs may be private enterprises but they are catering to sections of the public. If not legal, an ethical duty is cast upon them to act fairly and in a non-discriminatory manner. Equality is the edifice of our democracy and all sectors of the economy need to do acts so that clients get the same treatment. Hanging a sign on the door saying ‘Right of Admission Reserved’ does not dilute the responsibility to act in a fair and equitable manner.

A few cases regarding right to refuse service did hit the headlines. In ‘Constantine vs. Imperial London Hotels Ltd.’ ([1944] 1 KB 693), Mr.Constantine, an afro-Caribbean British subject, was turned away from the Imperial hotel despite having booked a room and paid the deposit. The hotel company was held liable, albeit only in nominal damages. In 1994, Denny’s, a restaurant chain in USA, reportedly agreed today to pay more than $54 million to settle lawsuits filed by thousands of black customers who had been refused service or had been forced to wait longer or pay more than white customers. In the case of ‘Carpenter vs. Limelight Entertainment Ltd.’ ([1999] CHRR Doc.99-197), Ms.Carpenter was a member of the Nuchatlaht First Nation (aboriginal Canadian) and was refused entry to a nightclub in Victoria, B.C., because she did not meet the dress code. The British Columbia Human Rights Tribunal concluded that Ms.Carpenter’s First Nations ancestry was a factor in the nightclub’s refusal to allow her entry, and, therefore, the refusal was discriminatory. In 2011, a group of Irish travellers and English Romani Gypsies were denied entry to a Pub. The guests alleged that the Pub treated them less favourably than others because they were Irish travellers or associated with Irish travellers. After a legal battle lasting over three years, the successful claimants were awarded damages of £3000/- each . In 2015, a Court in Colorado ruled that a baker cannot refuse to make a wedding cake for a gay couple based on his religious belief.

I have not come across any specific case law on this subject in the Indian context. Though in June this year the Deputy Chief Minister of Delhi had reportedly ordered an enquiry against an eatery which allegedly refused to serve underprivileged children, the outcome is unknown.

Hemant Sarin is a Lawyer practising in Punjab and Haryana High Court.