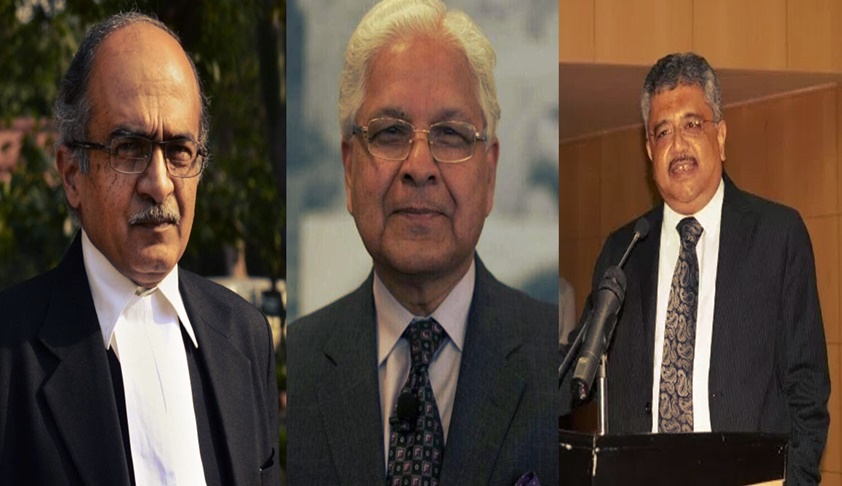 ASG Tushar Mehta; I do not know in whose interest public interest petitioners are acting,

Prashant Bhushan: The petitioners were acting in the interests of humanity and humanism.

Hearing in the string of writ petitions pressing for a ‘no pushback’ policy in respect of the Rohingya Muslims on Monday saw Prashant Bhushan, counsel for the petitioners, pray for an interim order to improve living conditions of the refugees in terms of health and education, pointing out that they are being denied access to healthcare and their children to schools.

Bhushan submitted before the Supreme Court bench of Chief Justice Dipak Misra, Justice DY Chandrachud and Justice AM Khanwilkar that numerous detailed investigations already filed before the court show this to be the case. He further pointed out that the UN has estimated 80 percent of refugees to be women and children.

On Monday, Bhushan pointed out that the government has accepted in its reply to the IA that pushbacks are occurring, and that the government has justified pushbacks to be in accordance with the law since refugees do not have passports or visas. He commented that they obviously do not have passports or visas because they are refugees fleeing genocide, and in law, the situation of refugees cannot be compared to that of foreigners at large. He further stated that the fact they did not have visas could not undermine India’s non-derogable and binding customary international law obligations to not refouled refugees, nor the protections guaranteed to refugees under the Indian Constitution.

ASG Tushar Mehta stated that the pushbacks were for national security and sovereignty and that he was not in a position to say everything in open court. He also stated that for reasons of demography, the Rohingyas could not be allowed to stay.

In response, Ashwini Kumar contended that national security and sovereignty could not be used as a bogeyman to destroy humanitarianism. He pointed out that India did have binding obligations under various international treaties it has signed and ratified, as well as customary international law, the Indian Constitution and our own national values such as ‘ Vasudev Kutumbakam’.

Senior counsel Colin Gonsalves also said refugees do not have access to water or sanitation in the camps and that as a result, a number of refugees had died. He added that since 2013, he has been seeking to improve conditions in Rohingya refugee camps and had four requests: access to water, toilets, health and education facilities.

It may be noted that the Supreme Court had on January 31 asked the Centre to respond to the interim application filed by advocate Prashant Bhushan seeking a direction to the Centre and border state governments to ensure the push back of Rohingya Muslims does not take place in view of the non-derogable principles of international customary law; for the BSF to file a compliance report; for the state and local municipal-run hospitals to provide medical care to the refugees; for state governments to provide education thereto in state-run schools; and for the Home Ministry to grant Refugee Identification Cards so as to allow the Rohingyas to obtain employment.

The application cited the deportation and the push-back policy of the Centre in respect of the Rohingyas in terms of its letter dated August 8, 2017, as illegal. The bench had on October 13, 2017, just stopped short of staying the deportation of Rohigya refugees till it decided the petitions challenging the action but asked the Centre to strike a balance between national security and human rights of the refugees.

The application also elaborated on the living conditions in the Rohingya refugee camps, including health and sanitation, livelihood and exploitation of Rohingya children.

Further, at the previous hearing, Bhushan had prayed that the schemes and provisions that were made available for the Srilankan Tamils by the government and documented in the Handbook for Rehabilitation prepared by the Tamil Nadu government, must be similarly provided for the Rohingya refugees to improve their living conditions.

In its reply, the Central government has refused to accede to the prayer of issuing Refugee Identification Cards to the Rohingyas through the Foreign Regional Registration Officers (FRRO) on the ground that the principle of non-refoulement has its origin in the UN Convention of 1951 relating to the Status of Refugees and the Protocol of 1967 to which India is not a signatory. In addition, there is also no law enacted by the Parliament in the same behalf.

On respect of the relief facilities granted to Sri Lankan Tamil refugees, the Centre has contended that the grant of these facilities has its genesis in the Indo- Sri Lankan Agreements of 1964 and 1974. Under these Agreements, India had agreed to repatriate and grant Indian citizenship to six lakh persons of Indian origin, together with their natural increase by 1981-82.

The Centre in its affidavit refuted the allegations regarding the use of chilli and stun guns by the BSF against Rohingya Muslims. Besides, it was asserted that the BSF is acting in compliance with the BSF Act and Rules, as well as the Passport (Entry into India) Act and Rules of 1920 and 1950, respectively.

The Centre also contended that as far as the Rohingyas, who have already entered the country are concerned, there has been no reported case wherein medical help or education was denied to them.

The bench, acknowledging the urgency of the matter, scheduled the matter for final disposal on April 9.