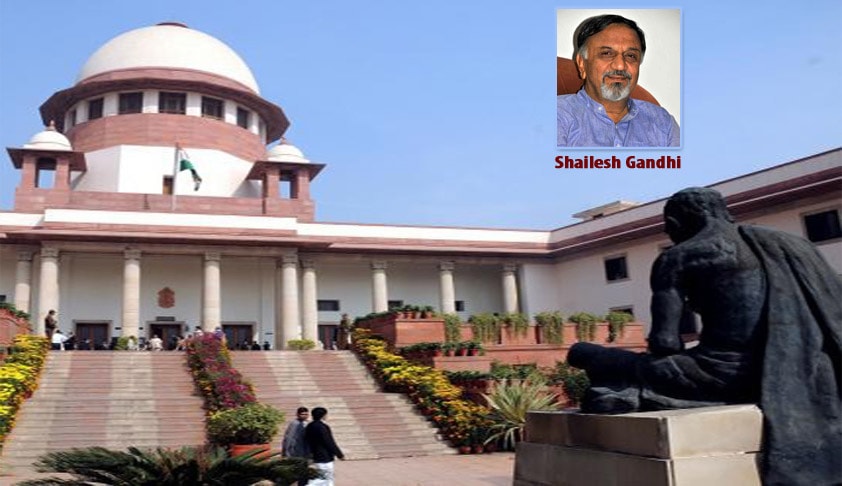 I still remember the excitement many of us felt on 12 October 2005, - which was Vijayadashmi,- as the RTI Act became effective. The nation has taken it up with great enthusiasm and over 20 million applications are likely to have been filed in the ten years since. As we celebrate ten years of this landmark event, I would like to draw attention to one apparent amendment which will...

I still remember the excitement many of us felt on 12 October 2005, - which was Vijayadashmi,- as the RTI Act became effective. The nation has taken it up with great enthusiasm and over 20 million applications are likely to have been filed in the ten years since. As we celebrate ten years of this landmark event, I would like to draw attention to one apparent amendment which will significantly constrict RTI.

RTI has given citizens empowerment to monitor their government and get accountability. Most people in power have begun to dislike RTI since it altered the balance of power in favour of the ordinary citizens. The first assault to amend it came in 2006. The then PM in his letter of 27 July, tried to mislead Anna Hazare and the movement by stating: ‘the amendments being currently proposed expand the scope of the Act to specifically include file notings relating to development and social issues. The overall effort is to promote even greater accountability in our decision making process.’ Citizens across the nation rejected this subterfuge and the government had to give up its move to amend and dilute it. Two more efforts were made but the government had to withdraw these since citizens got together to ensure that their fundamental right would not be constrained.

There is now a threat from a different direction.  Parliament passes the law, and courts have the job of interpreting them. RTI applicants have difficulty in getting a proper interpretation of the law from government officers and information commissioners. All information commissioners are selected without by any process and most have no predilection for transparency. When these decisions go against the applicant very few have the resources to challenge them in courts. On the other hand when an important decision goes against the public authority the department goes to court. In most of these cases the ability of applicants to pursue these cases is not high and hence most incorrect denials get confirmed by courts.

Out of sixteen judgments given by the Supreme Court on the RTI law in only in one was information ordered to be provided. This judgment also had the following statement:

Indiscriminate and impractical demands or directions under RTI Act for disclosure of all and sundry information (unrelated to transparency and accountability in the functioning of public authorities and eradication of corruption) would be counter-productive as it will adversely affect the efficiency of the administration and result in the executive getting bogged down with the non-productive work of collecting and furnishing information. The Act should not be allowed to be misused or abused, to become a tool to obstruct the national development and integration, or to destroy the peace, tranquility and harmony among its citizens. Nor should it be converted into a tool of oppression or intimidation of honest officials striving to do their duty.   The nation does not want a scenario where 75% of the staff of public authorities spends 75% of their time in collecting and furnishing information to applicants instead of discharging their regular duties.

This was without any basis and had no context with the case. RTI users were aghast at their fundamental right being described as a potential ‘tool to obstruct national development, integration, peace, tranquility and harmony’. Citizens generally perceive that many officers resort to oppression and intimidation, but are surprised to note that the court felt some citizens have acquired the power to turn the tables. This was a statement castigating citizens exercising their fundament right to expression. Other rights including the freedom of speech maybe misused by a few persons.. But it may be difficult to find such a castigation of the citizen’s use of a fundamental right in any other court judgment.

The Supreme Court had in many judgments laid down that the Right to Information is an integral part of the freedom of expression guaranteed as a fundamental right in the Constitution under article 19 (1) (a). The only limit which can be imposed on it is given in Article 19 (2) which states that ‘reasonable restrictions can be placed on the exercise of the right in the interests of the sovereignty and integrity of India, the security of the State, friendly relations with foreign States, public order, decency or morality or in relation to contempt of court, defamation or incitement to an offence’. These have been  imposed by the exemptions in line with Article 19 (2). The apex court’s judgment in the Girish Deshpande case is not in consonance with the exemption under Section 8 (1) (j) nor with the restrictions on the citizen’s fundamental right under Article 19 (2).

In this case the Supreme Court has given a judgment denying a RTI request for copies of all memos, show cause notices, orders of censure/punishment, assets, income tax returns, details of gifts received etc. of a public servant. The court has ruled without giving any legal arguments that this is personal information as defined in clause (j) of Section 8(1) of the RTI Act and hence exempted. The only reason ascribed in this is that the court agrees with the Central Information Commission’s decision. Such a decision does not form a precedent which must be followed. It also contradicts the earlier R Rajagopal and Anr. v state of Tamil Nadu Supreme Court judgment and hence cannot be considered as laying down the law. As per the RTI act denial of information can only be on the basis of the exemptions in the law. The court has denied information by reading Section 8 (1) (j) as exempting:

There are no words in the judgment,- or the CIC decision which it has accepted,- discussing whether the disclosure has any relationship to a public activity, or if disclosure would be an unwarranted invasion on the privacy. The words which have been struck above have not been considered at all and information was denied merely on the basis that it was personal information. Worse still the proviso ‘Provided that the information…..’ (underlined above) has not even been mentioned anywhere in the judgment. Effectively only 40 of the 87 words in this section were considered, out of which 22 were omitted.

Commissioners and officers gleefully took this as a precedent and started disallowing all information which could be called ‘personal’. I realized that if this judgment was taken as a precedent a lot of corrupt and arbitrary actions would not be exposed. Cases of false certificates, corrupt people getting rewarded and many other illegal actions would not be curbed.  Since it was being widely used to deny many information requests, I asked for the Income tax returns of Mr. Ajit Pawar. The Public information officer, First appellate authority and the CIC denied information on the basis of the Girish Deshpande judgment. I filed a writ in the Bombay High Court through Advocate Sandeep Jalan. The court did not deal with most of my contentions,- though it recorded them,- and rejected my writ primarily based on the Girish Deshpande judgment. I therefore filed a SLP in the Supreme Court. I had hoped that the Apex court would deal with my arguments. Since the issue related to the fundamental right of citizens and the matter was being agitated by a former Central Information Commissioner and presented by a former Bombay High Court judge as counsel, I expected it would hear the arguments and give its arguments interpreting the words of the law with reasons.

My counsel,- Justice Marlapalle who appeared for me pro bono- was told before he could say anything that the court was going to dismiss the petition in the light of the Girish Deshpande judgment.  Justice Marlapalle tried to persuade the court to hear the merits, but since he saw no way to convince the court to hear it on merits, he requested that he should be allowed to withdraw the petition. The withdrawal was done to keep the possibility of the basic issues being raised sometime in the future.

The Supreme Court has the right to interpret the law, but it must do this with reasons. It appears to me that the law is being amended by not considering 47 words of the 87 words in the law, without giving reasons and without considering the Court’s earlier judgments. The law is being amended without any reasoning. This deserves to be discussed widely and hopefully reversed. Otherwise the RTI Act could slowly be emasculated.