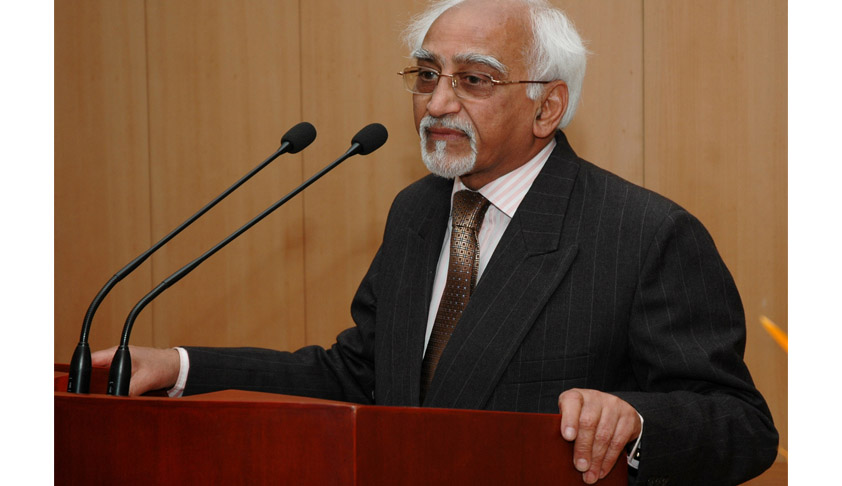 The Vice President of India, Shri M. Hamid Ansari has said that RTI is a powerful tool that strengthens democracy and promotes good governance by enhancing the citizen’s ability to participate in the process. He was addressing the inaugural ceremony of the New Building of Uttar Pradesh Information Commission in Lucknow, today. The Governor of Uttar Pradesh, Shri Ram Naik, the Chief Minister of Uttar Pradesh, Shri Akhilesh Yadav, Senior Judge, Lucknow Bench of Allahabad High Court, Justice A.P. Sahi and the Chief Information Commissioner of UP, Shri Jawed Usmani were present on the occasion.

The Vice President said that the legislative intent was to empower the citizen to promote transparency and accountability in the working of every Public Authority, reduce the gap between the information provider and the information seeker, enhance efficiency in administration of public authorities, mitigate corruption and promote good governance. He further said that there can be little doubt that this Act is one of the most empowering and progressive legislations passed in the post Independent India. This Act provide for better governance, and impact on the very nature of governance itself, he added.

The Vice President said that the basic tenets of the Act have been implemented, the institutional mechanisms are in place, and are being used by citizens as a tool to bring in transparency and accountability at all levels of Governance. He further said that while the Civil Society Organizations and Media can act as pressure points, most of the correctives need to be carried out by the Government and Information Commissions. There is a need for a sustained mass awareness campaign, need for greater voluntary disclosure of information held with public Authorities, need to rid ourselves of the old mindset regarding secrecy of government processes and transactions and the need for person demanding information under the RTI to be emboldened and secure, he added.

Following is the text of Vice President’s address:

A new building always brings to mind the remark of a statesman of our times that we shape our buildings, thereafter they shape us! I am nevertheless happy to be here today to inaugurate the new building of the U.P. Information Commission.

Free flow of information is essential for the health of a democratic society. This is aptly expressed in the preamble of the Right to Information Act, 2005:

“Democracy requires an informed citizenry and transparency of information which are vital to its functioning and also to contain corruption and to hold Governments and their instrumentalities accountable to the governed.”
Much before the legislative enactment our Judiciary, in a progressive interpretation of the Constitutional provisions, had paved the way towards delineating the Right to Information. In 1975, in State of UP vs. Raj Narain case, Justice Mathew had ruled;

“In a government of responsibility like ours, where all the agents of the public must be responsible for their conduct, there can be but few secrets. The people of this country have a right to know every public act, everything that is done in a public way by their public functionaries.”

In subsequent judicial pronouncements, the ‘Right to Know’ was further elaborated as being inherent in the Fundamental Rights. The judicial interpretation found reflection in a wide-spread public movement demanding statutory provisions for such a right. The spirit behind the movement for Right to Information was summed up in pithy slogans like;

The process, conceptually, was initiated when Parliament enacted the Freedom of Information Act, 2002. This was followed by the present Act that came into force on 12 October 2005. Its legislative intent was to empower the citizen to promote transparency and accountability in the working of every Public Authority, reduce the gap between the information provider and the information seeker, enhance efficiency in administration of public authorities, mitigate corruption and promote good governance.

There can be little doubt that this is one of the most empowering and progressive legislations passed in the post Independent India. It is often said that India’s RTI Act is one of the world’s best law with an excellent implementation track record. It has salient features such as clear, time-bound implementation schedules with penal provisions for non-compliance, a minimal exceptions clause, and a well structured appeals system. These provide for better governance, and impact on the very nature of governance itself. I highlight three aspects:

• Until the passage of this Act, the disclosure of information held by public authorities in India was governed, exclusively, by the Official Secrets Act, 1923. It was a legacy of the British colonial rule, encouraged secrecy and opaqueness in administration and was designed to deny information about government activities to the people.

• The RTI Act is different from other enactments in its operation. For most other laws, the executor of the law is government; and the citizen is normally required to comply by these laws. The RTI Act is the very opposite. Here, the citizen is the executor and the government has to act in response to a directive from the citizen. It thus reverses the roles of the public and the government. This is a new situation and requires getting used to by the administrators.

• A third radical provision of the Act is that the information seekers need not give a reason for demanding the information held by public authority or prove his/her locus standi for it. This allows activists and civil society organizations to take up issues on behalf of the marginalized and the un-empowered.

What then has been achieved by this law in the past decade?

There is little disagreement that the basic tenets of the Act have been implemented, the institutional mechanisms are in place, and are being used by citizens as a tool to bring in transparency and accountability at all levels of Governance. In particular, the RTI Act has had a much higher impact on the quality of life of the poor and marginalized section of the society. The institution of Information Commission has also assumed a pivotal position in implementing the law.

The Act is being used by civil society organizations and the media to bring about positive changes in the levels of corruption and accountability. Issues like public distribution system, privatization initiatives, pensions, road repairs, electricity connections, telecom complaints have been dealt by people through the RTI. Many honest officers also feel strengthened as decisions are now open to civil society and media scrutiny which acts as a deterrent to any extraneous pressures.

Perhaps its greatest impact has been in empowering the citizens and making the governments more responsive. Sharing of information is a form of co-option; it makes the seeker of the information a partner in the decision-making process. It has crept into popular vocabulary and added a verb to it- 'I will RTI if so-and-so is not done.' At times the mere threat of an RTI is sufficient to set the government machinery in motion.

The transformative power of the Act however is yet to be fully realized. The citizens, the Government, the media and the civil society need to address several constraining factors to ensure a more effective and equitable implementation of the Act.

The data available in the Annual Report for the period 2014-15, released by the Central Information Commission is revealing.

1. Only 2030 public authorities under the Government of India registered to submit their RTI returns under Section 25 of the Act in 2014-15. Of these, only 75.27% submitted their annual RTI returns.

A study by the Commonwealth Human Rights Initiative (CHRI) which tracks trends in the use of the RTI across India using both central and state Information Commission figures, estimated that only 14% of the applicants filed under RTI till 2012-13 came from rural areas, indicating low awareness levels about the RTI in rural areas. It also concluded that the number of women seeking information under RTI was also low. The report noted that the percentage of SCs and STs as RTI users, while still low in absolute numbers, had been increasing every year.

Some of the evident constraints in the effective implementation of the Act include lack of adequate public awareness, especially in rural areas, lack of proper system to manage and disseminate information, and capacity of the public information officers (PIOs) to deal with the requests, bureaucratic mindset and attitudes that encourages secrecy, and intimidation and threats to information seekers.

While the Civil Society Organizations and Media can act as pressure points, most of the correctives need to be carried out by the Government and Information Commissions. These would include;

• One, there is a need for a sustained mass awareness campaign both at Central and State levels to increase public awareness about the RTI and its operation, encourage citizen involvement, and increase transparency within the government. The Information Commissions can play an important role in this regard.

• Two, there is a need for greater voluntary disclosure of information held with public Authorities. Section 4 of the Act provides for an elaborate manual for mandatory disclosure on various aspects of structure and functioning of Public Authorities and requires that they make suo-motu disclosure in public interest. This is the essential ingredient for broadening and deepening of the transparency regime. The said section also emphasizes the need for using electronic means for record management and dissemination of information. Indeed, a robust record management is at the very heart of the transparency regime.

• Third, we have to rid ourselves of the old mindset regarding secrecy of government processes and transactions. Concerns have been expressed in some quarters that the disclosure of information inhibits free and open expression of opinion by government officials during the decision-making process. If the officials have approached the issues with honesty and in accordance with the rules, then this argument does not seem justified. The benefits of disclosure of information far outweigh the inconveniences experienced by the decision-makers in the government. There is a need to sensitize the public functionaries about the Right to Information and incorporate training module on RTI in all government training programmes.

• Fourth, the person demanding information under the RTI should be emboldened and secure. Of late, there have been reports of attack and assault on information seekers. This is disquieting and needs to be taken seriously and prevented. Even if the number of such reported cases is small, this shows the vulnerability of information seekers. Police authorities in States have to be sensitive to this and take effective steps to prevent the occurrence of such incidents. Exemplary punishment of the perpetrators would send a strong message around. I am happy to note that on the recommendation of the U.P. Information Commission, the Government of U.P. has recently issued necessary directions to all District Magistrates & Superintendents of Police in this regard.

I understand that on average about 3000 new appeals and complaints are filed before the U.P. Information Commission every month. This is a large figure even for a large state like U.P and perhaps, indicative of the need for improving the quality of voluntary disclosure. Public Authorities must be proactive and voluntarily put the maximum possible information in the public domain for the use of citizens.

RTI is a powerful tool. It strengthens democracy and promotes good governance by enhancing the citizen’s ability to participate in the process. Better implementation of this law requires not only political will but also an active civil society and an acknowledgement of its role. It requires better education of the people and a commitment from all to upholding the rule of law.

The U.P. Information Commission is one of the largest State Commission under the RTI Act, receiving the largest number of appeals and complaints from the public. The Government of U.P. deserves commendation for making budgetary provision to enable expeditious construction of this handsome building.

I venture to hope that the U.P. Information Commission will continue to implement effectively its responsibilities in the letter and spirit of the legislative intent.