When Rule Of Law Becomes A ‘Dead Horse’: SC Order Refusing Probe Into ‘Attack’ On Kanhaiya Kumar Is Unfortunate 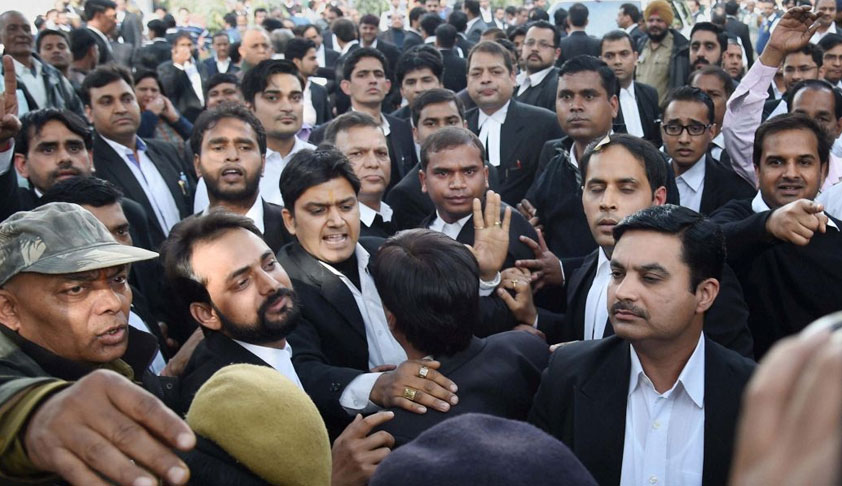 On 24th January, the Supreme Court dismissed the plea seeking probe by a Special Investigation Team into the attack of JNU student leader Kanhaiya Kumar which took place in the premises of Patiala House Court during February 2016. Reportedly, the bench comprising Justice Ranjan Gogi and Justice R Banumathi dismissed the plea, observing “We don’t want to flog a dead horse back into...

On 24th January, the Supreme Court dismissed the plea seeking probe by a Special Investigation Team into the attack of JNU student leader Kanhaiya Kumar which took place in the premises of Patiala House Court during February 2016. Reportedly, the bench comprising Justice Ranjan Gogi and Justice R Banumathi dismissed the plea, observing “We don’t want to flog a dead horse back into life”.  The court felt that nothing survived in the matter and closed it.

As much as it is disappointing, it is also surprising that the court ultimately chose to avoid interference, because it was in stark contrast with the very serious consideration the court had been bestowing upon this issue on all previous occasions since beginning. The attack of Kanhaiya Kumar within the premises of Patiala House Court by lawyers (there are also reports that there were thugs disguised as lawyers) happened in blatant defiance of the directions of the Supreme Court itself. The Supreme Court had issued strict directions to ensure safety of Kanhaiya Kumar and to avoid untoward incidents in Court premises, and had constituted a special committee consisting of senior advocates to oversee security arrangements. The court also had issued directions restricting entry of persons who were not materially connected with Kanhaiya Kumar’s case to the court. Defying all such directions, Kanhaiya Kumar was brutally attacked and manhandled by the members of the legal profession itself, within the premises of court.  Persons other than those permitted by the Supreme Court gained easy access to the court, betraying grave security lapses. This incident ought to have disturbed and shocked the Supreme Court, because, apart from all other reasons, this openly questioned the authority of the apex court undermining the binding value of directions passed by it.  If two years down the line, the Supreme Court trivialises this act of grave defiance through mob strength shown by none other than lawyers as a ‘dead horse’, then it makes one wonder as to the value and legitimacy the court attaches to its own orders.

JNUSU leader Kanhaiya Kumar was arrested on charges of sedition, allegedly for organising anti-national events and sloganeering against India. The situation in Patiala House Court on 15th February 2016, when Kanhaiya was produced before the Magistrate was quite charged up.  Some of the lawyers present decided to give due process of law a skip, and usurped the role of judge and executor to ‘punish’ Kanhaiya.  In a manner bringing disrepute to the noble profession of law, the lawyers behaved like street ruffians and manhandled Kanhaiya. The case was adjourned to 17th February. Meanwhile, one of the faculty members of JNU filed a petition in the Supreme Court seeking directions of ensure the safety of Kanhaiya Kumar on the next date of hearing, in the light of violent incidents of February 15. The Supreme Court took up the matter urgently on 17th February morning.  The division bench comprising Justice Chelameswar and Justice AM Sapre took the matter very seriously. The court felt that in order to avoid untoward incidents it was necessary to regulate the entry to the court before 2 PM, when Kanhiaya Kumar was to be produced. Hence, the court specified the names of persons in the order, which included his lawyers and five identified media persons, and directed that only those persons should be permitted to enter. The Delhi Police Commissioner and Registrar General of Patiala House Court were strictly directed to take steps to avoid mob gathering in Court.

However, despite the directions of the court, a tense situation developed in Patiala House Court, with a hostile mob, including lawyers, gathering there anticipating the arrival of Kanhaiya. So, the matter was again mentioned in the Supreme Court 2 PM, and the Court was informed of the intimidating and unruly situation in Patiala House Court. It was also submitted that 5 journalists who had gone to the court as permitted by the Supreme Court in the order passed in morning feared for their safety.

In that backdrop, the court passed the following order:

In the above mentioned circumstances, we thought it fit to depute some members of the Bar of this Court to observe the situation and report to this Court. We also believe the presence of the senior advocates might help diffuse the tension. We accordingly depute Mr.Kapil Sibal,Sr.Adv., Dr.Rajeev Dhawan,Sr.Adv., Mr. Dushyant Dave, Sr.Adv., Mr. H.P. Rawal, Sr.Adv., Mr. Ajit K. Sinha, Sr. Adv. and Mr. A.D.N. Rao, learned counsel to proceed to the Patiala House Courts Complex and report the situation prevailing there.

Report of the SC-appointed Committee

The lawyer’s committee filed a report about the violent incidents of 17th February.  The report stated that that lawyers and journalists were locked inside the court room and Kanhaiya Kumar was badly beaten up by lawyers, while police did nothing to prevent it.

“The atmosphere outside was surcharged and intimidating. Abuses were hurled at Mr. Kapil Sibal and all other committee members. There was an effort create an atmosphere of fear and terror. The upbeat mood of the crowd in lawyers’ dress who were continuously shouting slogans and abuses to present a terrorising atmosphere was clearly visible,” the report said.

It was also stated that a man, who was not a lawyer, wearing a suit and dark glasses had come inside the court premises. Kanhaiya had identified the man as one of the persons who had attacked him on the previous occasion, i.e on the 15th and stated that to the police. However, the police did not do anything, and the said man approached Kanhaiya and attacked him. The police did not do anything to prevent the assault and to apprehend that person. The committee recorded that Kanhaiya Kumar looked intimidated, terrified, injured and could not stand up from his chair.

The Registrar-General, upon being questioned by the committee, acknowledged that there were persons other than those permitted by the Supreme Court present in the court premises.

The committee report is vivid in its details, and is powerful enough to shock anyone with an iota of sense of justice present in mind.

Regarding this incident, India Today conducted a sting operation on three lawyers who allegedly led the assault on Kanhaiya, and released a video. In the video, the lawyers proudly bragged that they thrashed Kanhaiya and forced him to utter “Bharat Mata Ki Jai’. The video indicated that the attack was not spontaneous, but was the result of a well-orchestrated plan.  The National Human Rights Commission also intervened in the matter and observed that attack against him was ‘pre-planned and organized’.

The petition seeking investigation by a Special Investigation Team into the events in Patiala House on 15th and 17th February was filed by senior advocate Kamini Jaiswal. She also prayed for initiation of contempt of court proceedings against the three lawyers, Vikram Chauhan, Yashpal Singh and Om Sharma, who had figured in the India Today sting operation.

Meanwhile, the Bar Council of India also swung into action, and passed a resolution deprecating the misconduct by lawyers in resorting to violence against Kanhaiya Kumar. It also stated that a panel will be formed for enquiry.

On 11th April 2016, when the petition of Kamini Jaiswal came for consideration before the bench of Justice Chelameswar and Justice AM Sapre, the bench orally observed that the demand for SIT probe was justified. The bench also wondered how unauthorised persons entered the court room. Notices were issued to the respondents, including the above mentioned lawyers.

Later, on 14th November 2017, when the matter came before the bench led by Justice Gogoi, the court indicated its inclination to hear the matter. Justice Gogoi reportedly observed as follows: “We would like to examine the petition (Jaiswal’s plea) in the light of reports filed by Delhi Police and also by the Delhi High Court.”

In the light of the serious consideration given to the matter initially by the Supreme Court, the latest order closing the matter without deeper probe came as a surprise.

There are reports that the Delhi Police have not found anything incriminating against Kanhaiya Kumar regarding the sedition charges, and hence it was reported that the charges against him might be dropped. Forensic reports stated that the videos of anti-India sloganeering by Kanhaiya and friends were doctored. In a related development, the Delhi High Court quashed the disciplinary action taken against Kanhaiya Kumar and other students with regard to the alleged anti-national event, on grounds of procedural irregularities and remanded the matter. Be that as it may, even assuming the allegations to be true, it is doubtful whether charges of sedition will be sustainable in the light of the Supreme Court pronouncement in Kedar Nath v State of Bihar that mere utterance of words without any manifest action will not constitute offence of sedition.

All this makes one wonder whether the whole controversy was manufactured by jingoistic propaganda. What is more worrying and saddening is that lawyers, who are trained to be objective and rational in their analysis, got swayed by the hyper-nationalistic narrative and jumped in to deliver ‘justice’ through the might of fist instead of waiting for the due process of law. The sacrosanct temple of justice was converted into an ugly arena of fist-fight.

We often take pride in our Constitution. We also take pride in our judicial system, which ensured the protection of due process even to a terrorist like Ajmal Kasab, who was accused of committing horrendous crimes. But, a student-accused was denied the protection of law, by those who claim to be the guardians of law. And the Supreme Court wants to bury the issue, terming it a dead horse! The court felt nothing survived in the matter. But, recurrence of such instances will render the survival of constitutionally established legal system tough in the long run. By failing to condemn the shameful act, the Supreme Court rendered its own directions dead letters and an exercise in futility, and denuded itself of the moral authority to condemn and indict other like instances of "mob-justice"