S.377 Subjects LGBT Community To Discrimination; Used As A Weapon For Their Harassment: CJI Misra 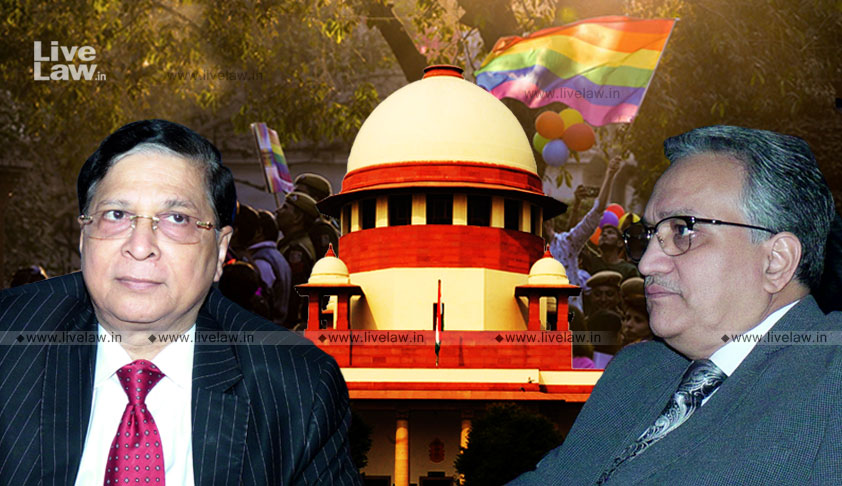 The Supreme Court on Thursday struck down the 157-year-old law which criminalized consensual homosexual acts between adults. In a unanimous decision, a five-judge Bench declared Section 377 of the Indian Penal Code unconstitutional, insofar as it criminalizes consensual sexual acts of adults in private.Chief Justice of India Dipak Misra, writing for himself and Justice AM...

The Supreme Court on Thursday struck down the 157-year-old law which criminalized consensual homosexual acts between adults. In a unanimous decision, a five-judge Bench declared Section 377 of the Indian Penal Code unconstitutional, insofar as it criminalizes consensual sexual acts of adults in private.

CJI Misra begins his opinion by quoting German thinker, Johann Wolfgang von Goethe, who had said, "I am what I am, so take me as I am". He also quotes Arthur Schopenhauer who had said, "No one can escape from their individuality", and John Stuart Mill's quote:

"But society has now fairly got the better of individuality; and the danger which threatens human nature is not the excess, but the deficiency of personal impulses and preferences."

The quotes were added to emphasise on the unique being of an individual being the "salt" of his/her life, explaining, "Denial of self-expression is inviting death. Irreplaceability of individuality and identity is grant of respect to self. This realization is one's signature and self-determined design. One defines oneself. That is the glorious form of individuality. In the present case, our deliberation and focus on the said concept shall be from various spectrums."

CJI Misra's opinion candidly declares that the LGBT community possesses equal rights as all other citizens of the country under the Constitution of India. He even makes reference to the "rainbow", which has become the symbol of LGBT pride throughout the world.

He wrote, "It is through times of grave disappointment, denunciation, adversity, grief, injustice and despair that the transgenders have stood firm with their formidable spirit, inspired commitment, strong determination and infinite hope and belief that has made them look for the rainbow in every cloud and lead the way to a future that would be the harbinger of liberation and emancipation from a certain bondage indescribable in words – towards the basic recognition of dignity and humanity of all and towards leading a life without pretence eschewing duality and ambivalence.

It is their momentous ―walk to freedom and journey to a constitutional ethos of dignity, equality and liberty and this freedom can only be fulfilled in its truest sense when each of us realize that the LGBT community possess equal rights as any other citizen in the country under the magnificent charter of rights – our Constitution."

Weapon in the hands of the majority

CJI Misra further acknowledges that the provision was being used as a "weapon in the hands of the majority to seclude, exploit and harass the LGBT community". He explains that it "shrouds the lives of the LGBT community in criminality and constant fear mars their joy of life" and that the community consequently constantly faces prejudice, disdain and is subjected to "the shame of being their very natural selves".

This was essential as the two-Judge Apex Court bench in Suresh Kumar Koushal and Anr. v. Naz Foundation and Ors., had opined that a "minuscule fraction of the country's population constitute lesbians, gays, bisexuals or transgenders" and that over the last 150 years, fewer than 200 persons had been prosecuted under Section 377, concluding from this that "this cannot be made sound basis for declaring that section ultra vires the provisions of Articles 14, 15 and 21 of the Constitution."

Sexual orientation an essential facet of the right to privacy

Citing the judgment on the right to privacy in Justice KS Puttaswamy (Retd.) v. Union of India, the CJI ruled that sexual orientation is an essential facet of the right to privacy, observing, "In view of the above authorities, we have no hesitation to say that Section 377 IPC, in its present form, abridges both human dignity as well as the fundamental right to privacy and choice of the citizenry, howsoever small.

As sexual orientation is an essential and innate facet of privacy, the right to privacy takes within its sweep the right of every individual including that of the LGBT to express their choices in terms of sexual inclination without the fear of persecution or criminal prosecution."

The CJI summarised the Court's conclusions as follows:

Progressive interpretation of the Indian Constitution

Protection of the right to live with dignity

Fundamental Rights not just for the majority

Absence of concept of consent under Section 377

"Against the order of nature": Definition

Testing Section 377 on the pedestal of Articles 14 and 19

Section 377 unconstitutional, but any sexual activity with any animal still an offence